Each year, Mexico City commemorates the anniversary of its devastating 1985 tremblor by holding a series of evacuation tests. This annual rite both honors the 10,000 people who lost their lives in that disaster and prepares the city’s current residents for the next natural disaster. But yesterday, soon after business had resumed, central Mexico was rocked by a real—and deadly—7.1-magnitude earthquake.

As buildings began to sway, crowds poured into the streets. In videos posted to Youtube and Twitter, many structures seemed to disintegrate under the vibrations. At least 200 people died, according to the Associated Press and other news outlets.

Unfortunately, Tuesday’s tremblor is just the latest chapter in Mexico’s long and tragic history of earthquakes. Two weeks ago, an 8.1 magnitude earthquake—the strongest in a century—jolted southern Mexico, killing nearly 100 people. What many don’t realize is that there’s a simple reason behind this region’s propensity for cataclysms: The geology of Mexico—and particularly that of Mexico City—makes it a perfect storm for seismic catastrophe.

These latest quakes were caused by the movement of tectonic plates, the pieces of Earth’s crust that move and jostle against each other. Mexico sits atop a complicated juncture of tectonic plates, which have been engaged in a slow-motion collision for over a million years. As these plates scrape against one another, tension builds until they reach a breaking point—which is when an earthquake strikes. The sudden release of energy causes seismic waves to radiate out from the epicenter.

According to the U.S. Geological Survey, who tracks earthquake activity worldwide, over the last century there have been roughly 19 other earthquakes over 6.5 magnitude within just 155 miles of the epicenter of the latest quake. Hundreds more have shaken the thousands of miles that make up the country's coastline, many topping eight on the equivalent Richter scale.

This latest quake was centered on a region where the Cocos tectonic plate, which sits beneath the Pacific Ocean, is slowly being shoved beneath the continental North American plate. This movement is causing extreme tensions as the slab is rammed into the Earth.

Though the epicenter for the 1985 earthquake was over 200 miles away from Mexico City, the disaster nearly flattened the capital. (U.S. Geological Survey Department of the Interior/USGS/I.D. Celebi)

It gets worse. Mexico City, the country’s densely-populated capital, is even more susceptible to earthquakes than the rest of the country. This holds true even if the epicenter of the quake is positioned far from the city’s boundaries, which was the case for both this latest earthquake (which originated nearly 100 miles southeast of Mexico City in the state of Puebla), and the 1985 earthquake (whose epicenter was some 200 miles from the capital).

Though the fact that these quakes occurred on the same day 32 years apart is purely coincidence, their dramatic impact on the capital is not. The reason: Ancient sediments that underlie the city trap and magnify the vibrations that ripple through the region.

Mexico City sits atop an ancient shallow lake, with soils made of sediments that washed in from the surrounding mountains thousands of years ago. In the early 1300s, attracted by those fertile soils, the Aztecs selected an island in the lake on which to build their capital city, Tenochtitlan, which eventually became Mexico City. Though the Spanish later drained the surrounding waters to prevent frequent flooding, the effects of that decision can still be felt today.

When earthquake tremors hit solid rock, the rock simply shakes. But when they roll into the soft sediments of a basin, the vibrations can become trapped, reverberating back and forth through the material, explains Susan Hough, a seismologist with the USGS. "It's almost like a bathtub, the [seismic] waves will slosh back and forth," she says. Other seismologists have likened these lakebed dynamics to a bowl of Jello.

This reverberation doesn’t just carry these waves further—it can actually amplify them. “A basin will have natural frequencies, which depend on its shape and size, as well as the material properties of the sediments inside,” explains Jascha Polet, a geophysicist at California State Polytechnic University, Pomona, via e-mail. “When seismic waves make a basin shake at one of these natural frequencies, significant amplification may occur.”

Depending on the frequency of the seismic waves, the movement of the ground can feed energy into buildings of a certain height. This, as yesterday’s quake shows, causes them to sway—and eventually topple.

“Think of pushing a kid on a swing,” Hough adds. “If you start pushing every 5 seconds, it will just mess things up.” That is, the pushes won’t have a cumulative effect. But if you push at a consistent frequency, each push will send the child higher into the sky.

This map shows the location of all the earthquakes measuring over 7.0 magnitude that have been recorded in North America. Though many are scattered across America's west coast, note the high concentration of quakes in central and southern Mexico. (USGS)

While it’s long been known that sediments can magnify tremors, researchers didn’t learn exactly how dramatic the effects could be until 1985. The tremblor nearly flattened the distant Mexico City, yet left many cities close to the epicenter nearly unscathed. "This [earthquake] taught us that soft soils can magnify motion to a degree never thought possible," University of California at Berkeley engineer Vitelmo Berto told the LA Times in 1986, a year after the disaster.

The seismic waves that were taking down buildings were five times greater than waves outside the city, according to measurements taken during that event, reported the LA Times. "No one expected the intensities of motion that were recorded in Mexico City,” Berto said. “No one had designed for it, and that is why so many buildings failed.”

When soils are saturated with water, intense shaking can cause them to lose their solid structures and begin acting like a liquid—to the point that the ground can swallow up cars like quick sand. Liquefaction worsened the impacts of the 1985 earthquake, undermining the foundation of many buildings. While it is not yet known if this is a factor for the latest quake, “it would not be surprising,” says Polet.

If there is a silver lining to these destructive natural events, it’s that they present an opportunity for scientists to collect real world data in hopes of better understanding and coping with future disasters. “This disaster presents us with a major opportunity to learn and prevent a similar disaster from happening in the United States,” said the National Science Foundation's then-assistant director for engineering during a U.S. congressional briefing in the wake of the 1985 disaster.

Coming off the heels of Mexico City's latest tragedy, however, the focus must be on the people of central Mexico. “The priority now is continue rescuing those who are still trapped and provide medical attention to the injured,” Mexico's President Enrique Peña Nieto said in a video statement, according to KTLA.com. “Unfortunately many people have lost their lives, including girls and boys in schools, buildings and houses. I want to express my condolences to those who lost a family member or a loved one. Mexico shares your grief.” 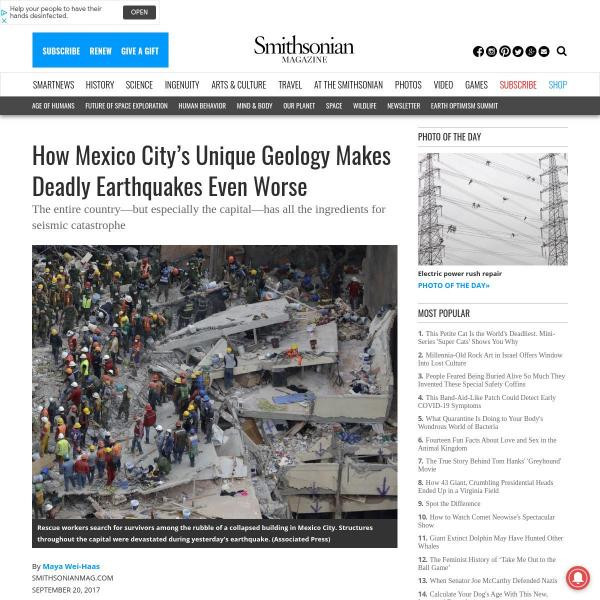