After the Civil War, the Industrial Revolution swiftly spread west into the Great Plains, bringing with it the sky-choking smoke of railroads, factories, and industrial pollution. But even before that, the region’s rivers weren’t exactly pristine. An 1869 dispatch from Theodore R. Davis, a staff illustrator for Harper’s Magazine, dubbed one stream the “Stinking Water.” Davis writes:

“The name was conferred by the Indians who have more than once been forced to abandon a camp-ground on this river on account of the offensiveness of the water, caused by the decaying carcasses of buffalo that have been mired in the mud and there died. ... Hundreds of buffalo perish each year in places such as this stinking water, for an accessible crossing-place is difficult to find.”

Those pesky American bison—colloquially known as buffalo—were dying naturally. But by the late 1880s, just 20 years after Davis’s account, the distinctly unnatural forces of rifle-wielding white settlers, industrialists and cattle ranchers had nearly driven the bison to extinction. The collapse was catastrophic for the Native Americans who relied on the massive beasts for food and clothing, not to mention the buffalo themselves.

Few if any observers, however, fretted about the disappearance of large rotting carcasses from the waterways.

Now, modern studies on another drowning-prone large herbivore suggest that the bison carcasses may have been doing far more than just stinking up creek beds. African wildebeests that die en masse on the Mara River in Kenya and Tanzania not only feed scavengers, but also release key nutrients directly into the river, according to a recent study in Proceedings of the National Academy of Sciences. As the carcasses decompose, maggots hatch, and mats of brown and green algae and bacteria grow over the bones, providing year-round sustenance for the local fish.

Altogether, it takes seven years for the wildebeest bones to fully disintegrate, releasing nutrients like phosphorous and carbon into the river. This slow decomposition, while unpleasant to smell, is crucial for the Mara River ecosystem, sustaining microbes, insects, and fish, as well as large scavengers. In the past, river ecologists had assumed that high levels of dissolved carbon from rotting corpses are unhealthy and unnatural for rivers. But the researchers found  that protected parks actually have more dissolved carbon their rivers compared to unprotected ones, suggesting that less human influence can sometimes mean more putrid rivers.

“It sounds cheesy, but death and decomposition are the other half of the circle of life, and that’s very obvious in the Mara Serengeti ecosystem,” says ecologist Amanda Subalusky of the Cary Institute for Ecosystem Studies, a co-author on the recent study. “Where some might see a stinking river full of maggots, I see the other half of the whole circle happening.”

“We were walking the river bank counting carcasses,” she says. “As we walked around each bend, there would be these mounds of carcasses, piled up, anywhere from just a few, like five or ten, up to a couple hundred. There were crocodiles basking on banks. Just huge, fat, sated crocodiles. We saw crocodiles mating. It just seemed like a big crocodile party. There was storks and vultures kind of roosting along the trees and defecating, so certain trees were covered in guano ... The whole river smelled of decomposing carcasses, but it was fascinating to see all the life.”

A scene depicting American buffalo sketched by artist George Catlin in 1832. From his Letters and Notes: “Near the mouth of White River, we met the most immense herd crossing the Missouri River—and from an imprudence got our boat into imminent danger amongst them, from which we were highly delighted to make our escape. It was in the midst of the ‘running season,’ and we had heard the ‘roaring’ (as it is called) of the herd, when we were several miles from them. When we came in sight, we were actually terrified at the immense numbers that were streaming down the green hills on one side of the river, and galloping up and over the bluff s on the other. The river was filled, and in parts blackened, with their heads and horns, as they were swimming about . . . furiously hooking and climbing on to each other. I rose in my canoe, and by my gestures and hallooing, kept them from coming in contact with us, until we were out of their reach.” (George Catlin / Smithsonian American Art Museum)

The Mara River isn’t the only modern ecosystem that relies on rotting carcasses for sustenance. When large whales die, their bodies sink to the seafloor, where their bodies form an entirely unique ecosystem. First, scavenger species such as hagfish tear away large pieces of soft tissue, but later the carcass is colonized by even stranger creatures, such as the “bone-eating” worms—which have no mouths, no anuses, and only globules full of symbiotic bacteria to help them digest the whale carcass.

That means that it isn’t just whales and their prey that suffer at the hands of commercial whaling, which by some estimates, killed off as many as 90 percent of living whales during the 18th and 19th centuries. “Some of the first extinctions in the ocean may have been whale-fall communities, because we removed that habitat before we even knew the communities existed,” says conservation biologist Joe Roman of the University of Vermont, who was not involved in the wildebeest study.

Roman’s research focuses on how whales help distribute nutrients during their lifetimes, most notably by swimming large distances and then pooping. “We’re learning what we lost by restoring these species,” he says. “When marine ecology started, there basically weren’t any whales in the ocean ... People didn’t consider whales very important. As we’re seeing those numbers increase along coastlines, we’re starting to get an idea of the role they might play.”

Unfortunately, there are few ecosystems that can directly compare to the Mara. That’s because humans have disrupted nearly every large herbivore migration on the planet, and continue to kill off these key animals faster than they can kill themselves. It’s practically impossible for human biologists to get an accurate sense of what ecosystems looked like before the loss of large animals, because, according to many paleoecologists, humans have been wiping out large animals since the prehistoric migrations out of Africa.

The human migration across the Bering Strait into the Americas 15,000 years ago was followed by the extinctions of American mammoths and mastodons, giant ground sloths, sabre-tooth cats and giant armadillos. Other continents also suffered losses. When humans first landed in Australia 60,000 years ago, they would have encountered 500-pound kangaroos, 10-foot-tall flightless birds, wombat relatives the size of rhinoceroses, and monitor lizards that grew to over 20 feet long. By 45,000 years ago, all of those species were gone.

“There’s no record of [large-bodied animals being] more prone to extinction until humans arrive on the scene,” says S. Kathleen Lyons, a paleoecologist at the University of Nebraska-Lincoln. “Something that humans do targets large-bodied species and causes them to go extinct.”

It isn’t hard to see why large animals with ample stores of meat and fat would be attractive to hunters. But Lyons says that the ancient human-driven extinctions weren’t solely due to hunting. The expansion of farming could have resulted in habitat fragmentation even then. Humans also could have carried diseases or changed wildfire patterns, leading to more deaths. Whatever the reason, extensive losses of large animals almost certainly disrupted nutrient cycling, says Lyons.

“Let’s say that most of these species weren’t migratory and so they don’t have the mass drownings,” says Lyons. “Even without that, they’re still pooping and moving nutrients around the landscape that way.”

Whales are yet another large-bodied animal whose carcasses can support a bevy of other animals. Usually, dead whale carcasses sink to the bottom of the ocean, where "whale fall" ecosystems crop up around them. (Ray Bulson / Alamy )

During the Industrial Revolution, technology sped up both expansion into the habitats of large animals habitats and efficiency in killing them. That’s when a funny thing happened: white settlers recognized that bison carcasses could be used as fertilizer. Settlers would gather bison bones and sell them to chemical manufacturers in places such as Dodge City, which would extract carbon and other nutrients from the bones to make fertilizer and other products. In essence, humans were using dead bison for the same purpose that the ecosystem was.

Kendra Chritz, a geochemist at the Smithsonian National Museum of Natural History who studies large animals’ impact on savannah ecology, concurs. “We don’t actually have very many large herbivores in North America, so what do we have to do to make sure that our lawn stays trimmed and they get more nutrients? We have to mow them all the time,” says Chritz, who wasn’t involved with the new study.

But these human actions have limits. “Somebody has to do the job of cycling nutrients,” she says. “Now the job has largely been taken over by human beings, and we can’t really do that everywhere on Earth.”

As to whether the bison regularly drowned en masse, the historical record isn’t clear. But accounts of carcasses strewn along riverbanks abound.

In his March 29, 1805 journal entry, Meriwether Lewis of the Lewis & Clark expedition noted: “We found a number of the carcasses of the buffalo lying along shore, which had been drowned by falling through the ice in the winter.” In 1795, a trapper named John MacDonnell found another bison mass grave, writing “observing a good many Carcasses of Buffaloes in the River & along its banks I was taken up the whole day with Counting of them & to my surprise found I had numbered when we put up at night 7360 Drown'd and mired along the River and in it.”

Mass deaths on that scale would undoubtedly have released huge amounts of nutrients into the surrounding environment. If MacDonnell’s count of over 7000 carcasses is accurate, that single drowning would have released over a million pounds of drowned bison meat into the Assiniboine River—or the equivalent of 34 blue whales. It’s hard to say what the impact of mass drownings would be in other rivers because temperatures, water flow and ecosystems vary so widely, Subalusky says. But it would have been vast.

Although bison populations are growing thanks to restoration efforts, it’s impossible to know what river ecosystems of the Great Plains lost. “One of the problems with talking about the historic Great Plains is that it’s all educated guesses,” says Isenberg.  “[If] you look at remnant grasslands in the Great Plains now, they’re not necessarily what like what a historic grassland would have looked like 100 or 200 years ago.” The same can be said of whale fall ecosystems that are no more, and other areas where large herbivores are winking out as a result of human actions. 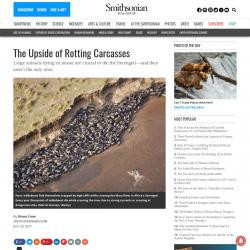