Operation Crossroads, which had its first big event–the dropping of a nuclear bomb–on July 1, 1946, was just the beginning of the nuclear testing that Bikini Atoll would be subjected to. When the first bomb of the tests dropped, it was the first time since the 1945 attacks on Japan that a nuclear weapon had been deployed. Here are three things you might not know about the infamous tests:

The test subjects were ghost ships full of animals

The goal of the tests was to see what happened to naval warships when a nuclear weapon went off, writes the Atomic Heritage Foundation. More than 42,000 people–including a crew of Smithsonian Institution scientists, as well as reporters and United Nations representatives, according to Alex Wellerstein for The New Yorker–were involved in observing the nuclear tests, but the humans were, of course, not the test subjects.

Instead, “some of the ships were loaded with live animals, such as pigs and rats, to study the effects of the nuclear blast and radioactive fallout on animals,” writes the foundation. In total, more than 90 vessels, not all carrying live cargo, were placed in the target area of the bomb, which was named Gilda–after Rita Hayworth’s character in the eponymous film.

The gathered scientists included fish scientist Leonard P. Schultz, who was then the curator of ichthyology for the National Museum of Natural History. Although he was given safety goggles, writes the museum, “he was doubtful whether the goggles would protect him.” So, in true scientific fashion, “he covered one eye and observed the explosion with the other.” His eyes were fine, and the effects that he felt included “a slight warmth” on his face and hearing a boom about two minutes after the flash.

Schultz and his colleagues were there to collect species and document the Atoll before and after the tests. They collected numerous specimens including sea and land creatures, writes the museum, which remain in the museum’s collections today. “The Smithsonian’s collections document the extent to which the diversity of marine life was affected by the atomic blasts,” writes the museum, “providing researchers who continue to ­study the health of the ecosystem with a means to compare species extant today with those collected before the tests.”

The first bomb missed its target

That reduced the damage done to the ghost ships. “The weapon exploded almost directly above the Navy’s data-gathering equipment, sinking one of its instrument ships, and a signal that was meant to trigger dozens of cameras was sent ten seconds too late,” Wellerstein writes.

It started a tradition of nuclear testing in this vulnerable place

“The nuclear arms race between the US and Soviet Union displaced 167 Marshallese as refugees in their own country,” writes Sarah Emerson for Motherboard. After the first 1946 tests, the U.S. government continued to use the area around Bikini Atoll and the Marshall Islands for nuclear testing, writes Erin Blakemore for Smithsonian.com, conducting 67 nuclear tests in total. 23 of those tests were conducted at Bikini Atoll specifically, including one 1954 test of the largest nuclear device the U.S. ever exploded.

The Marshallese displaced by the testing have not been able to go back to their poisoned homes. Today, it’s hard to know when the Atoll will ever be safe to return to, writes Blakemore, although the Marshall Islands overall are becoming less radioactive. 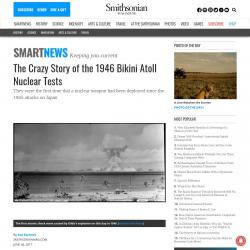