Scientists Just Discovered Water Near a Star 170 Light Years Away An artist’s depiction of the newly discoverd ice-rich, rocky asteroid that was ripped apart by the distant white dwarf star 200 million years ago. Image copyright Mark A. Garlick, space-art.co.uk, University of Warwick and University of Cambridge

The star GD61 is a white dwarf. As such, it’s insanely dense—similar in diameter to Earth, but with a mass roughly that of the Sun, so that a teaspoon of it is estimated to weigh about 5.5 tons. All things considered, it’s not a particularly promising stellar locale to find evidence of life.

But a new analysis of the debris surrounding the star suggests that, long ago, GD61 may have provided a much more hospitable environment. As part of a study published today in Science, scientists found that the crushed rock and dust near the star were once part of a small planet or asteroid made up of 26 precent water by volume. The discovery is the first time we’ve found water in a rocky, Earth-like planetary body (as opposed to a gas giant) in another star system.

“Those two ingredients—a rocky surface and water—are key in the hunt for habitable planets,” Boris Gänsicke of the University of Warwick in the UK, one of the study’s authors, said in a press statement. “So it’s very exciting to find them together for the first time outside our solar system.”

Why was water found in such a seemingly unhospitable place? Because once upon a time, GD61 wasn’t so different from our Sun, scientists speculate. But roughly 200 million years ago, when it exhausted its supply of fuel and could no longer sustain fusion reactions, its outer layers were blown out as part of a nebula, and its inner core collapsed inward, forming a white dwarf. (Incidentally, this fate will befall an estimated 97 percent of the stars in the Milky Way, including the Sun.)

When that happened, the tiny planet or asteroid in question—along with all the other bodies orbiting GD61—were violently knocked out of orbit, sucked inward, and ripped apart by the force of the star’s gravity. The clouds of dust, broken rock and water that the scientists recently discovered near the star are the remnants of these planets.

Even in its heyday, the watery body was probably still very small—perhaps comparable in size to our solar system’s dwarf planet Ceres, which orbits in the asteroid belt and is about .015 percent the mass of Earth. Additionally, like Ceres, the ancient planet or asteroid was extremely water-rich (26 percent water, far more than Earth’s .023 percent), and this water was similarly constituted as ice locked within a rocky crust.

To find all this out, the group of scientists (which also includes Jay Farihi of the University of Cambridge and Detlev Koester of the University of Kiel) used observations from two sources: a spectrograph on board the Hubble Space Telescope, through which they obtained data on ultraviolet light emitted by GD61, and a telescope at the W.M. Keck Observatory on Mauna Kea on Hawaii.

By looking at the light emitted from the star, which glows in certain patterns depending on the chemical signatures of gases present, they were able to determine the proportions of a number of elements (including oxygen, magnesium, aluminum, silicon, calcium and iron) contained within the cloud of dust that surrounds it. Using computer simulations of this stellar atmosphere, they were able to rule out a number of alternate possibilities that could have accounted for the abundance of oxygen, leaving only the explanation that it was brought there in water form.

Based on the amount of water and rocky minerals detected in the star’s atmosphere—and assuming it all came from one body—scientists speculate that the small planet or asteroid ripped up by the white dwarf was at least 56 miles in diameter, but perhaps much larger.

Although the star certainly isn’t home to any life at the moment due to its relatively cold temperature, the finding makes it seem more likely that other exoplanets contain water, which is necessary for life as we know it. Many scientists have speculated that small planets and asteroids like Ceres delivered water to Earth in the first place, so finding evidence of a watery body like this in another star system raises the possibility that the same process may have brought water to an Earth-sized planet elsewhere too.

“The finding of water in a large asteroid means the building blocks of habitable planets existed—and maybe still exist—in the GD 61 system, and likely also around a substantial number of similar parent stars,” Farihi said. “These water-rich building blocks, and the terrestrial planets they build, may in fact be common.” 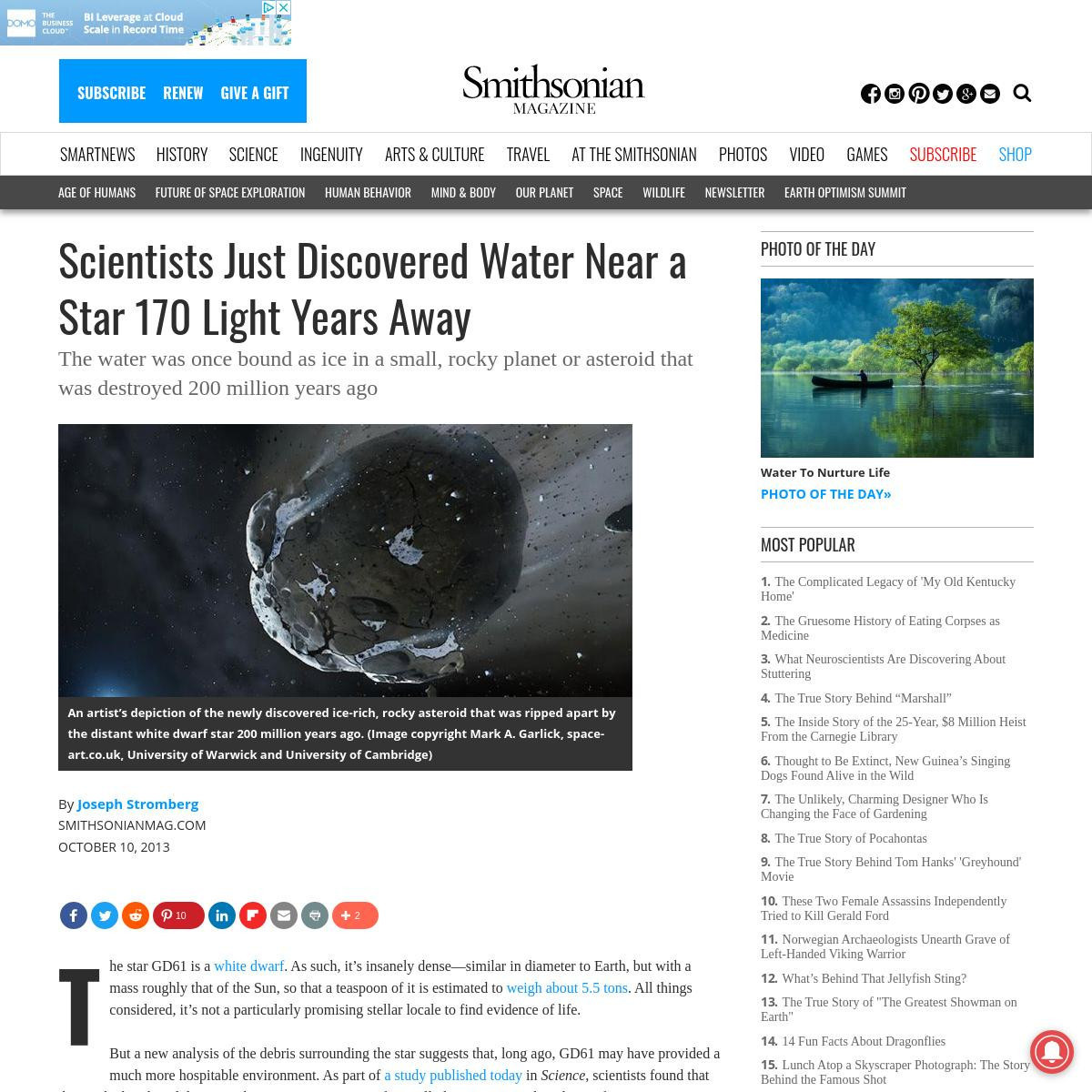