Change Author / Owner : You Are What You Buy

At a Wal-Mart, James Twitchell, professor of 19th-century poetry at the University of Florida, in Gainesville, is energized as any dedicated scholar would be upon entering an archive packed with new material. Twitchell loves this stuff so much that he has switched from teaching and writing solely about Romantic poetry to buzzier issues, such as adolescents wearing dungarees slung low to reveal their Joe Boxers, and whether the Jolly Green Giant is an avatar of Zeus.

His study of mass culture, especially advertising, began 15 years ago, when he was teaching a class on the Romantic poets. "I suddenly realized my students had no interest in what I had to say." He asked them to complete a line from Wordsworth: "My heart leaps up when I behold a ______ in the sky." Nobody could supply the missing "rainbow," but his students could flawlessly recite the contents of a Big Mac: two all-beef patties, special sauce, lettuce, cheese, pickles and onions on a sesame-seed bun.

"It was an epiphany," he says, and he was determined to find out why the stuff his students knew was so powerful that it pushed his stuff out of the way.

Since then, he has been observing himself, his family and his colleagues, students and neighbors. He has invited himself into advertising agencies and has explored advertising's history. And he has learned that the average adult now encounters some 3,000 advertisements every day, from bus flanks to messages over the telephone as the caller waits on hold. He has probed the impact of all that mass marketing in such works as ADCULTUSA and his latest book, Twenty Ads That Shook the World.

"My own take," he says, "is that humans love things and we've always been materialistic, but until the Industrial Revolution only the wealthy had things now the rest of us are having a go at arranging our lives around things." 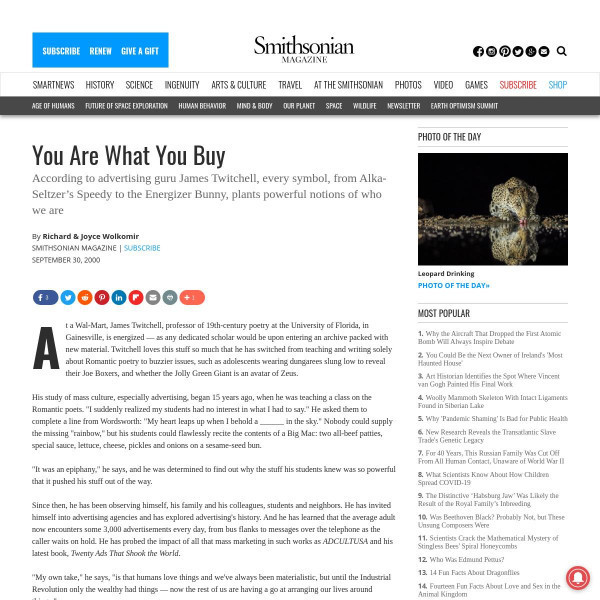