Abigail Tucker on “In Search of the Mysterious Narwhal”
Description

Abigail Tucker is a staff writer at Smithsonian magazine. She recently ventured up to Greenland to report on narwhal research, and her story “In Search of the Mysterious Narwhal” appears in the May issue.

What drew you to this story? Can you describe its genesis a bit?

I read a news item about scientists attaching temperature sensors to narwhals. The story wasn’t much more than a blurb, but it alluded to a lot of things I’d never thought about—like what, exactly, a narwhal was, and how on earth a person would tag one. So I called Kristin Laidre, the American scientist working on the project, and when she started talking about the amount of work, and waiting, involved I knew it would be an interesting piece.

Did you have any complications in your travels?

It depends what you mean by “complications.” On several occasions the power went out at these tiny Greenlandic airports where I waited to catch rides on small planes and helicopters, which made me a little nervous. And the weather wasn’t great on the days that I traveled. But for the most part I was not delayed – in fact, storms twice prevented my aircraft from making scheduled stops for other passengers, so I essentially flew direct!

What did you find most interesting about life in Niaqornat?

I hadn’t realized that dogs would be such a big part of life there. Because I traveled to and from Niaqornat by helicopter and boat, I didn’t think about the fact that, in deepest winter, teams of dogs would be able to cross the frozen fjord. This makes winter a great time for visiting friends in nearby towns.

The dogs, a special Husky-like breed, are work animals. They stay staked outside even during storms and are not always the friendliest creatures. The puppies, though, are allowed to wander around the village, eating whatever they can find. They are very fat compared to their mothers.

What was your favorite moment during reporting?

So many things amazed me. As we were preparing to board the boat that would take us the final leg of the journey to Niaqornat, we saw a trio of fin whales loping just off shore, and hunters were in the midst of butchering pilot whales on the beach. I thought the narwhals would arrive any minute. Little did I know!

But even though the narwhals never showed, I learned a lot by interviewing and sharing meals with villagers. Eating narwhal was quite an experience.

One afternoon a villager took me ptarmigan hunting in the empty mountains around the town. One of his arms was badly disfigured. I asked him what had happened, and he explained that once when he was out ptarmigan hunting as a boy, a boulder had fallen on it and crushed it. He had been trapped, alone and freezing, for hours. Yet as an adult he crossed the mountainsides with complete confidence, as though nothing had ever happened.

What surprised you the most about narwhals?

I hadn’t realized how immensely valuable their tusks had been. I was in Greenland as the world economy really began to slide, and it made me think about how we assign worth to certain objects, and why. 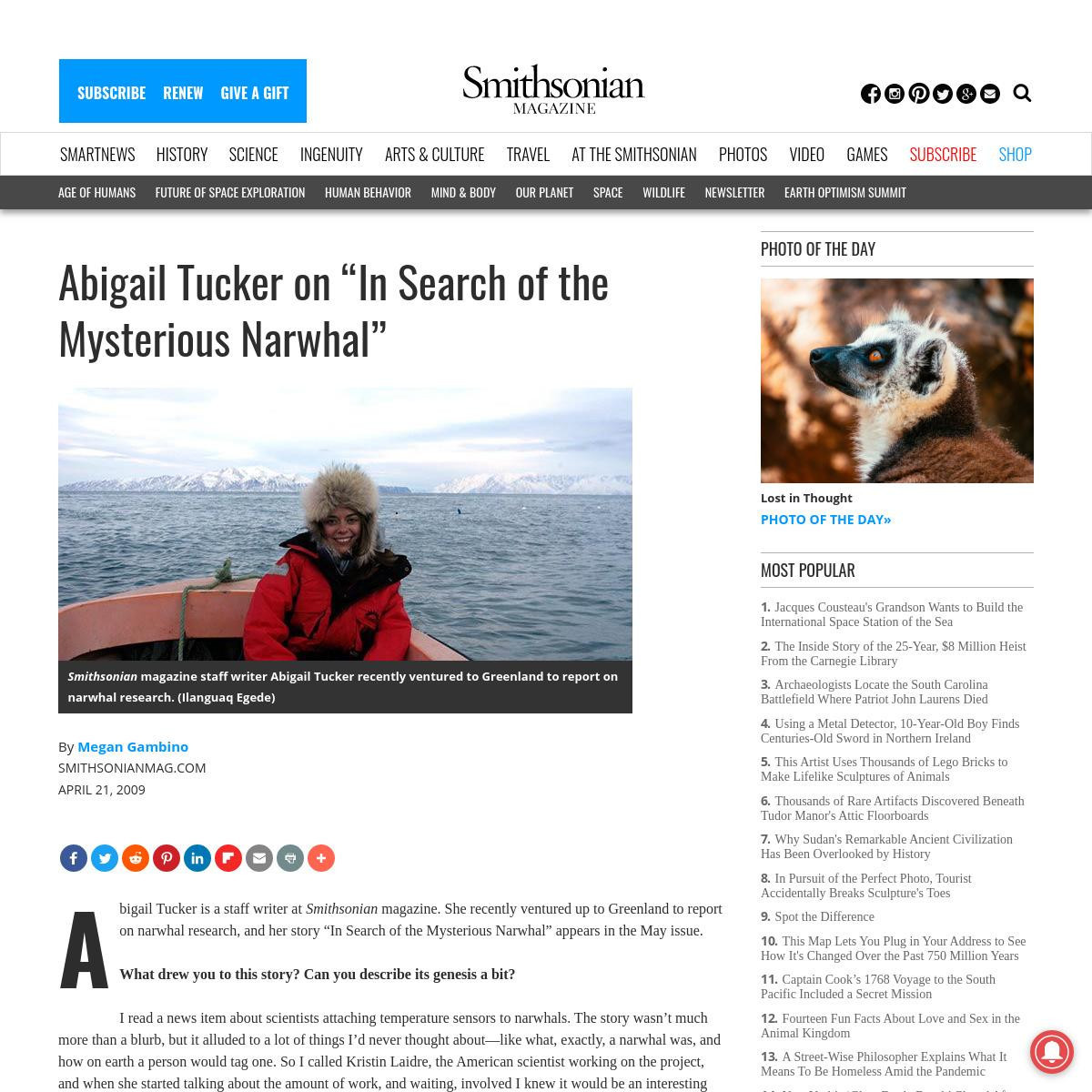