Decades ago, amateur fossil hunter Daniel Sotty was exploring a fossil bed in Montceau-les-Mines in eastern France when he came across what looked like a tiny spider fossil. When researchers examined the find, however, they realized it wasn’t a spider at all. Now, this 305-million year-old spider look-alike is helping scientist learn how our modern 8-legged web-spinners came to be.

“When I first saw it, I was unsure what kind of arachnid it was,” University of Manchester paleontologist Russell Garwood, who worked on the fossil tells Brian Switek at National Geographic. “The legs and entire front half of the body [were] buried in the rock.”

When Garwood’s team, who recently published their results in Proceedings of the Royal Society B, performed a CT scan and examined the 3-D model of creature, they realized it was unlike other invertebrates. “This fossil is the most closely related thing we have to a spider that isn't a spider,” Garwood tells Jonathan Webb at the BBC.

Dubbed Idmonarachne brasieri after Idmon, Arachne the weaver’s father in Greek mythology, the invertebrate has eight legs and fangs like a spider. But the creature has a segmented abdomen and was probably only able to squirt silk globs as opposed to the delicate threads of modern spiders.

The reason? Idmonarchne​​ lacks an organ called a spinneret, which spiders use to direct the silk and weave elaborate webs.

Idmonarchne is similar to other ancient spider relative known uraraneids, which likely used its sticky silk to line burrows or wrap up their eggs. “[Idmonarchne] falls along the line of evolution towards true spiders,” arachnologist Jonathan Coddington of the Smithsonian's National Museum of Natural History tells Switek. “[It] implies a fairly neat set of transitions to true silk production.”

“The earliest known spider is actually from the same fossil deposit—and it definitely has spinnerets,” Garwood tells Webb. “So what we’re actually looking at is an extinct lineage that split off the spider line some time before 305 million years ago, and those two have evolved in parallel.”

But because the specimen is only 0.6 to 0.8 inches long, Garwood had to make sure that the spinnerets hadn’t simply fallen out. So he sent the specimen the Diamond synchrotron, a specialized scanner in England that can pick up tiny details. The results did not show any holes where spinnerets could have been.

Garwood tells The Guardian that’s what really separates Idmonarchne from the long reign of modern spiders. “The key innovation of spiders is the spinnerets,” he says, “and that is probably responsible for their massive success.” 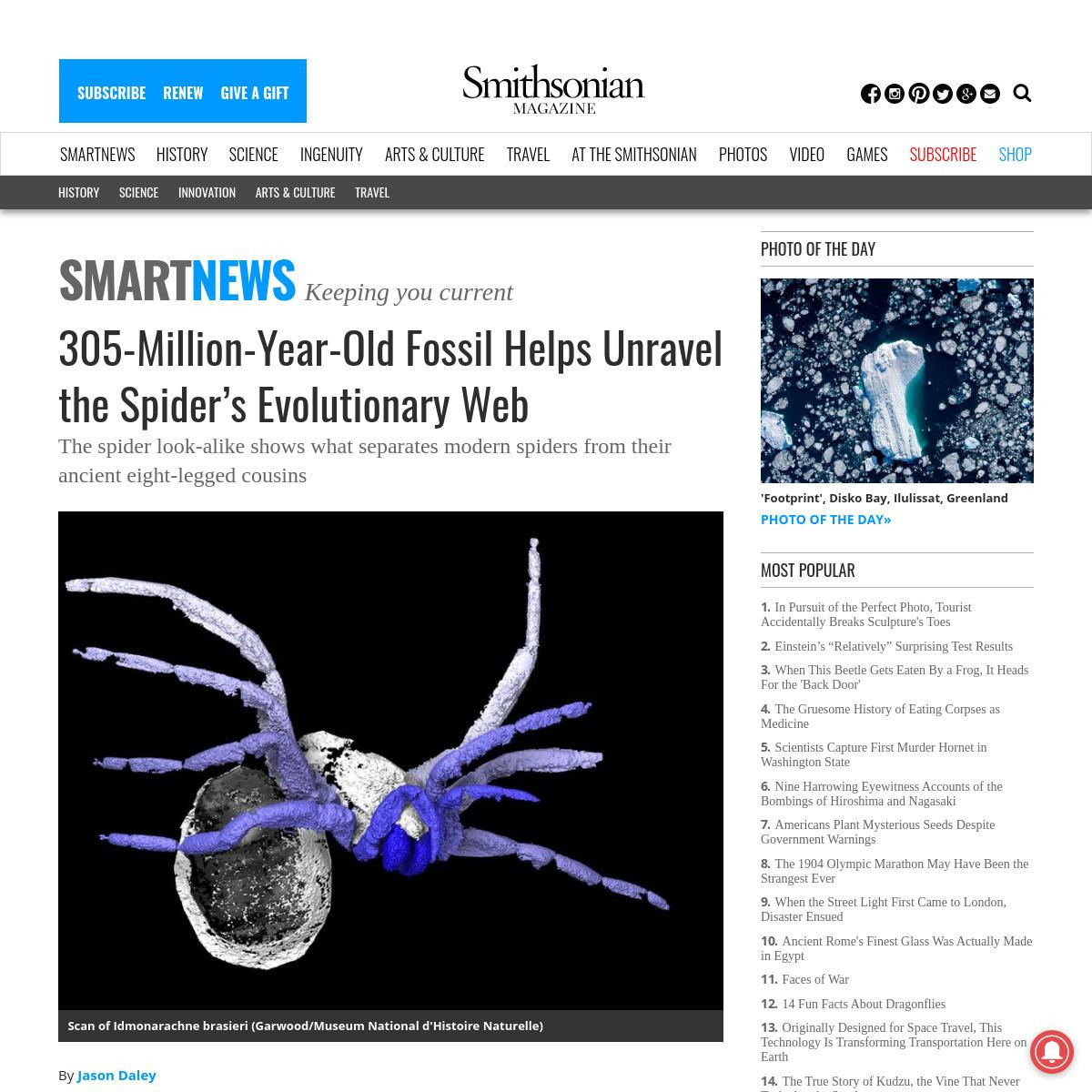