While Oregon’s craft beer market may be nearly saturated with foamy brew, which flows from nearly 60 brewpubs in Portland alone, breweries in Northern California are fewer and farther between—with just enough beer taps to sate one’s thirst and spark interest but far enough apart that one arrives at the next one thirsty for another pint—especially travelers on bicycles. North Coast towns with breweries include Eureka, Ukiah, Blue Lake, Fort Bragg, Boonville, Healdsburg, Sonoma and Petaluma, and here are several worth pedaling for.

North Coast Brewing Company, Fort Bragg. In a dark cellar at North Coast Brewing Company, the beer bottles endured the slow crawl of time. Years plodded by, the Chinook salmon industry crashed, whales migrated past going north, then south, then north again, and one American president replaced the next—until finally, on a recent afternoon in August, five aged bottles of Old Stock Ale saw daylight. I was lucky enough to be there, along with the brewery’s owner, Mark Ruedrich, and the company’s two brewers, Patrick Broderick and Ken Kelley, for a very special event: a vertical tasting. In a vertical, the drinkers taste multiple bottles of progressively older vintages of the same beer (or wine) in order to observe how the beverage grows and matures (or, if it happens to be the case, deteriorates) through the years. We started with the 2012 Old Stock Ale, and we noted the 12-percent alcohol beer’s bright and fresh youth, with its sharp and brassy scents of prunes and sherry. Then we stepped back three years and found in the 2009 bottle a fudgier, thicker version of the last. Next, we re-entered the George W. Bush era and tasted the 2007. The sharp, vibrant esters of the beer’s younger days had softened into something bittersweet, with distinct notes of marmalade. We dug deeper still into the strata of the years, back to 2005. The beer was a shade darker now and with a slight tartness of acidity in the rich layers of flavor. Now, think back: Where were you in 2003? I was just entering a long and homeless stint of trekking through Baja California, when I could live on a dollar a day but didn’t know a pilsner from a porter—and when Ruedrich and his brewers were just putting caps on the fourth vintage of Old Stock Ale. Opened nine years later, the beer gave off a heavy, bready smell thickened with notes of molasses and whiskey. In the mouth, it was soft and creamy. And we went back further still, into another era of modern society—when the Fort Bragg salmon industry was still afloat, and when people everywhere could still walk through airport security with their shoes on and, no doubt, with a bottle of wine in their carry-on. And with just the slightest hiss of escaping gas, the 2001 Old Stock came open—a creamy, thick, velvety beer of time-reduced carbonation but still delicious and alive. “Is there a point where this beer peaks?” I asked. “We haven’t seen it yet,” Ruedrich said of the Old Stock, which was first released in 2000. Want to have your own private vertical tasting of Old Stock Ale? Aged cases of this remarkable beer will soon be for sale, Ruedrich promises. Watch the North Coast Brewing Company’s website. Beers through the years: A vertical tasting is among the most rewarding experiences in beer drinking, taking the taster into the past through the looking glass of a high-alcohol beer. Photo by Alastair Bland.

Anderson Valley Brewing Company, Boonville. It doesn’t take a master’s in chemistry to taste and ponder beer—but at Anderson Valley Brewing Company’s tasting room, in Boonville at the junction of highways 128 and 253, it helps a person to know a bit of the local dialect called Boontling. A local tongue mostly forgotten, Boontling is more like a form of slang than a language and supposedly was born in the hop fields among women and children workers seeking to entertain themselves with a quirky set of alternative vocabulary. Today, a few old-timers in this quiet wine- and apple-growing region supposedly can still break into fluent Boontling. Listen closely on your next visit and you might hear someone say “Bahl hornin’,” which means “Good drinkin’” or ”Cheers!” And wine in Boontling is “seep,” bear is “leeber,” coffee is “zeese,” payphone is “bucky walter” and beer is “steinber.” To crowd your way in to a tight space is to “ab”—possibly a reference to the tide pool crevices out at the coast jam-packed with abalone. But to be realistic, Boontling is not likely to be heard anywhere outside of the brewery’s tasting room, where the chalkboard menu is scrawled with the bizarre lettering of beers named in Boontling. Examples include the Hop Ottin’ IPA, the Poleeko Pale Ale and the Barney Flats Oatmeal Stout —that one named after the Boontling name for Hendy Woods, the local state redwood park (with a nice $5 campsite for cyclists). The tasting room is open 11 a.m. to 6 p.m. daily, and until 7 on Fridays, and offers a delicious selection of beers unavailable by the bottle. The sour stout and the bourbon-barrel aged stout, for example, are each creative renditions of the oatmeal stout—and of which two five-ounce taster glasses gave me the fuel and courage to leave the valley via the rigorous and uphill Highway 253. Most brewpub menu boards include unusual beer names—but at Anderson Valley Brewing Company, patrons will have to decipher the unusual dialect of Boontling to know what they’re ordering. Photo by Alastair Bland.

Lagunitas Brewing Company, Petaluma. Lagunitas is the brewery that fights for its right to party. Federal regulators have multiple times figuratively frisked this charismatic and often irreverent beer company just north of San Francisco for various suspected infractions, and for use of questionable language on bottle labels. Today, several beers in the brewery’s lineup are references to such incidents. The Censored Rich Copper Ale, for instance, was first introduced in 2002 under a slightly edgy title that was rejected by federal product labeling authorities. So the brewery’s owner, Tony Magee, simply slapped the word “censored” over the original bottle label and resubmitted it. The label was approved. And another high-alcohol, malty brown ale was brewed after a 2005 incident in which false accusations of illegal activity in the brewery led law enforcement officials in disguise to crash an after-hours employee party. “We felt pretty insulted for that, like we had been sucker-punched in the jaw,” Tony Magee explained to me recently. And so he and his brewers released a bitter and aggressive beer to commemorate the occasion, and they named it Undercover Investigation Shut-Down Ale, with the shrugging subtitle of “Whatever. We’re still here.” And where is “here,” you may ask, if you’re hoping for a draft pour of these and other brawny Lagunitas ales—like the Brown Shugga’, the Cappuccino Stout and the Hairy Eyeball? As posted on the sign in front of the brewery, Lagunitas Brewing Company can be found at “1280 N. McDowell Boulevard Petaluma, Calif. USofA, Earth, Sol, Local Group, Virgo Super Cluster, Space.”

And this just in from the White House: President Obama, with the assistance of local homebrewing experts, has made a beer. The White House Honey Brown Ale is believed to be the first beer brewed on the presidential property, though George Washington reportedly dabbled in off-site distilling, and Thomas Jefferson made wine. After Obama and his colleagues drank the Honey Brown, they were inspired enough to plod onward into the homebrewing frontier, where—like America in some ways—anything is possible. And so they brewed a Honey Porter and a Honey Blonde (which sounds kind of boring to me, but at least we taxpayers didn’t cough up for it; Obama did, from his own pocket). The honey, according to the White House’s website, comes from an on-premises beehive. And while Obama may have pitched the beer yeast, I will venture to guess he left the beehive raid to an expert. Those looking for a beer at Lagunitas Brewing Company must first go to space. Zero in further on the Virgo Super Cluster, the Local Group, the Sun, Earth, the United States, California and, finally, Petaluma’s North McDowell Boulevard, and you’ll find this irreverent maker of many beers. Photo by Alastair Bland. 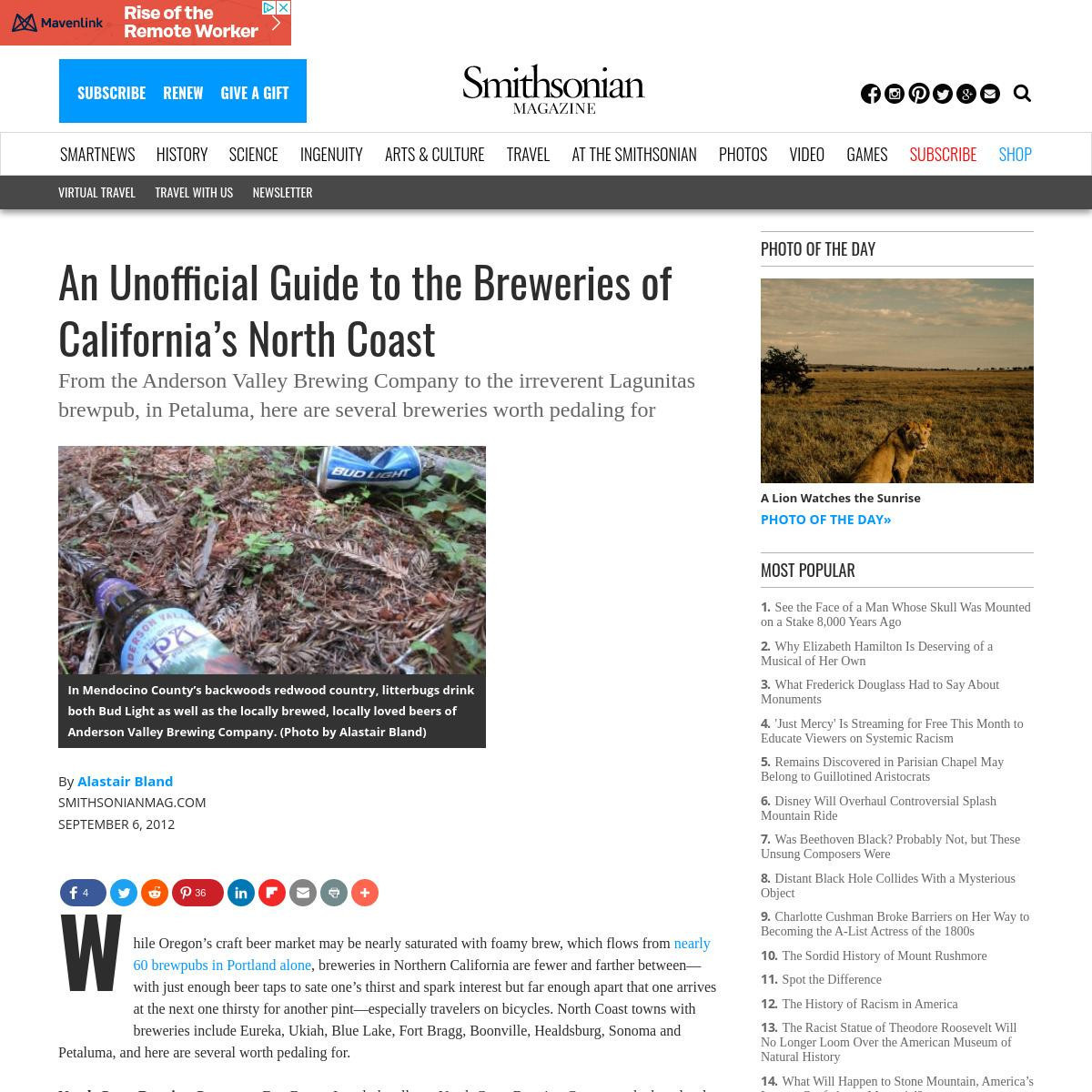