3 ) He and his family were thrown out of their house by the Germans during World War II.

4 ) They had to live in a dugout in the garden.

5 ) Gagarin was interested in space even as a child.

6 ) He joined the "AeroClub" in high school.

7 ) He met Valentina Goryacheva while in military flight school.

9 ) They had two daughters, Elena and Galina.

10 ) Elena remembers that her father liked poetry and literature.

11 ) In 1960, the Soviet Union chose 20 pilots, including Gagarin, to begin training for a human space flight.

13 ) Gagarin and Gherman Titov were the final two potential spacemen.

14 ) They were chosen not only for their excellence in training but also for their short stature (the cockpit was small).

16 ) Before taking off, Gagarin wrote a letter to his wife saying he likely wouldn't return.

18 ) Legend says that Gagarin had to relieve himself on the way to the launch pad.

19 ) And now modern (male) cosmonauts do so as well: "They leave the bus and stand at the left back wheel of the bus, to relieve themselves," says the European Space Agency.

20 ) Gagarin was launched into space at 6:07 UTC from the Baikonur Cosmodrome.

21 ) This was only 3 1/2 years since the first object, Sputnik, had been launched into space.

22 ) Vostok 1 made one complete circuit around the Earth.

24 ) He was the first human to see Earth from space.

25 ) Gagarin ejected from the space capsule when it was still 7 kilometers from the ground.

26 ) He then deployed a parachute at 2.5 kilometers in altitude.

27 ) Some people have argued that Gagarin does not qualify for the title "the first man in space" because he didn't land inside his aircraft.

30 ) Two schoolgirls witnessed the landing and described a huge ball that bounced on the ground as it landed.

31 ) A farmer and her daughter came upon Gagarin dressed in his orange spacesuit and dragging his parachute and backed away in fear.

32 ) He told them, "don't be afraid, I am a Soviet like you, who has descended from space and I must find a telephone to call Moscow!"

33 ) Americans congratulated the Soviets on their space achievement.

34 ) And then sent their own man, Alan Shepard, into space a few weeks later.

35 ) It wasn't until the next year, however, that an American astronaut, John Glenn, would make a full circuit around the Earth.

37 ) He went on a world tour and was greeted by adoring crowds.

38 ) But he soon returned to the cosmonaut facility.

39 ) There, he spent years working on designs for a reusable spacecraft.

40 ) Although he was a backup pilot for later spaceflights, he was ultimately banned from space because the Soviets were worried about losing their hero.

42 ) His ashes were interred on Cosmonauts' Avenue outside the Kremlin in Moscow.

43 ) So are the ashes of four other cosmonauts who died during their missions.

45 ) A crater on the Moon is named for Gagarin.

47 ) More than 500 people have gone into space since Gagarin.

48 ) Every year, people around the world celebrate Yuri's Night on April 12.

49 ) You can post this handy infographic on your wall to remind yourself about details of Gagarin's flight.

50 ) And you can read this post from Starts With A Bang about what cosmonauts (and astronauts) can see as they orbit the Earth. 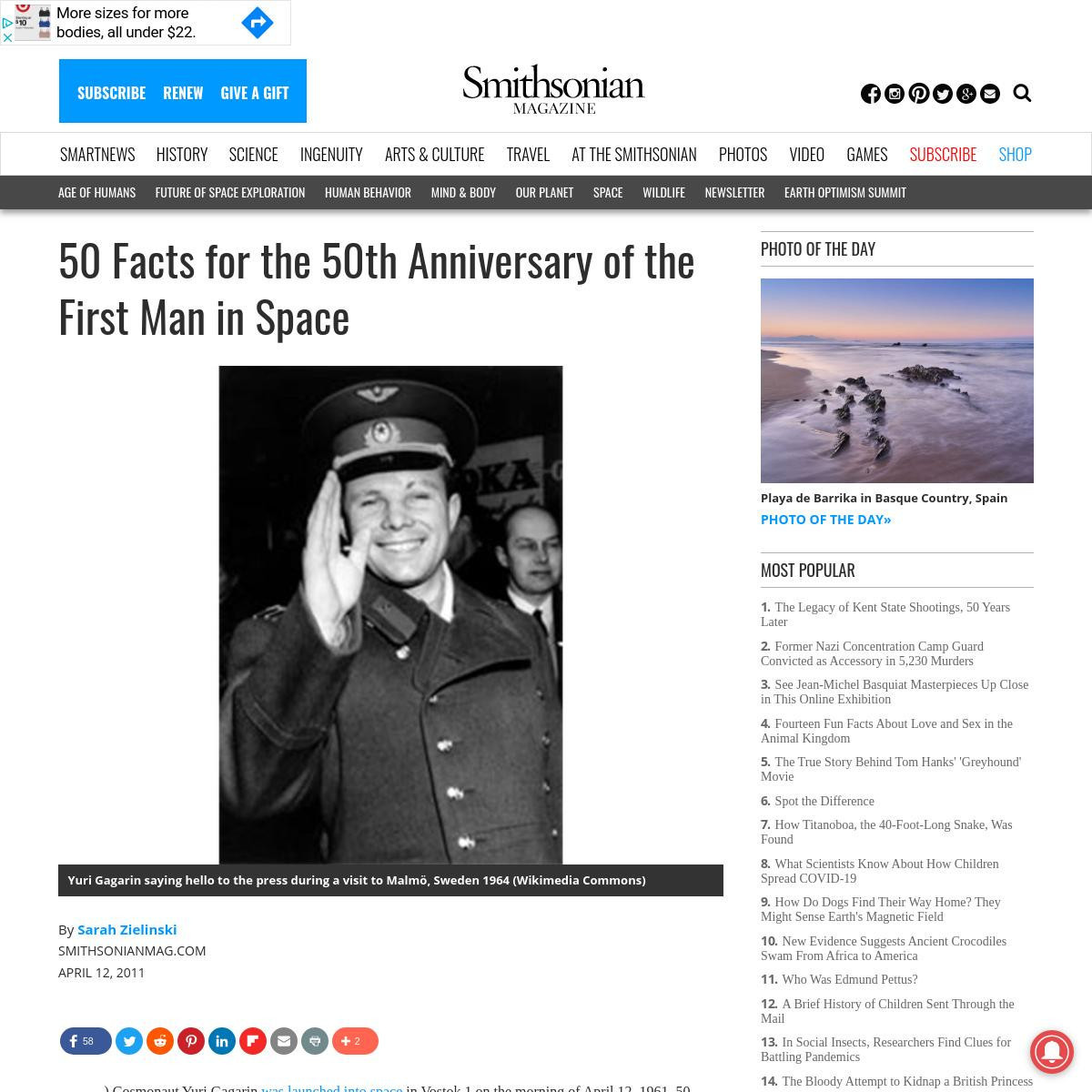 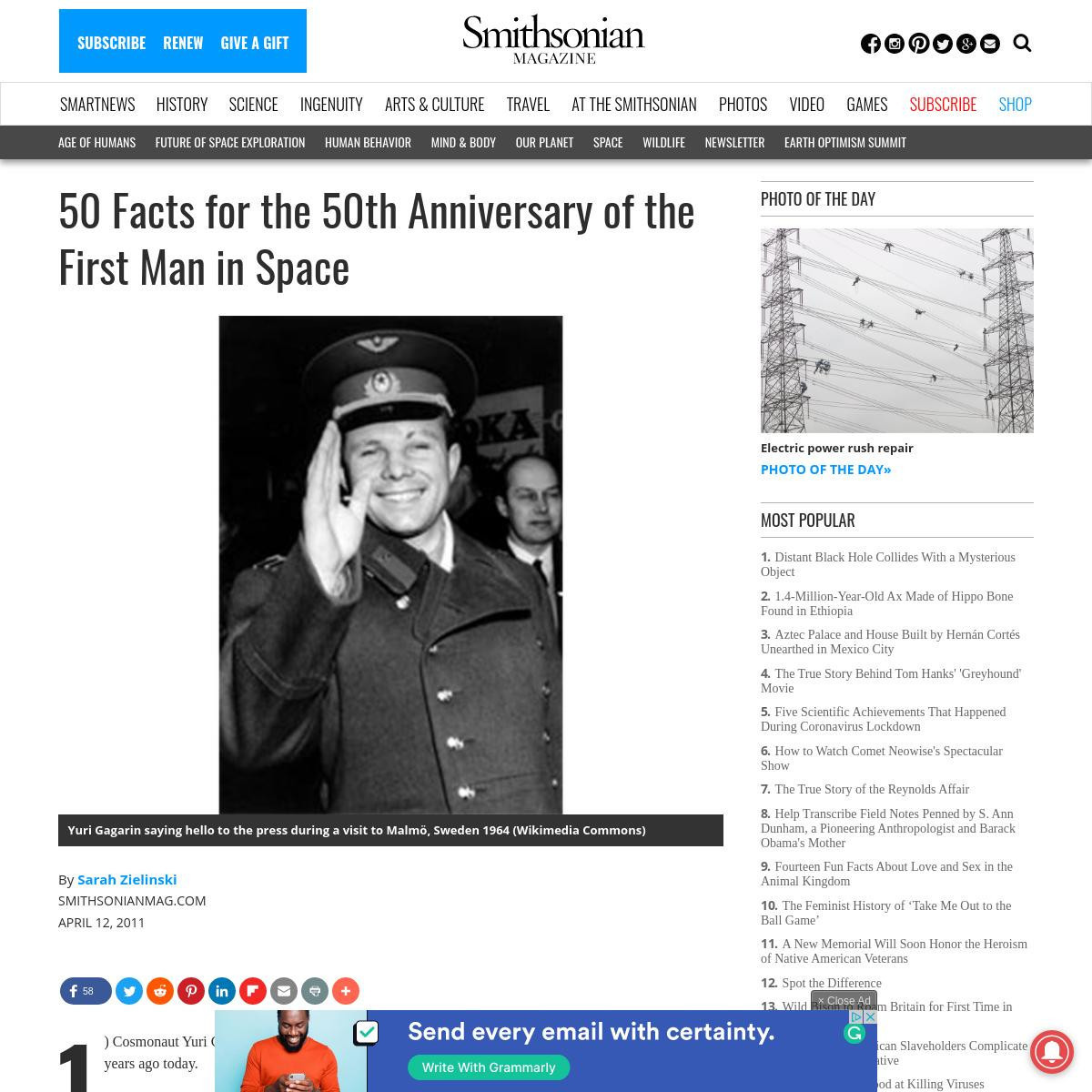