Bedding down beneath sharks doesn't sound like the smartest idea. But put a wall of thick plate glass between the creatures and yourself, and it suddenly sounds like a pretty cool way to spend the night.

That's just what the National Aquarium in Baltimore wants to provide in "Sleepover With the Sharks," one of two overnights the museum offers. For $79.95, guests can unfurl their sleeping bags on the carpeted floors of the underwater viewing area. There, after a dolphin show, a lasagna dinner and a behind-the-scenes tour of the aquarium, it's lights-out out at 11 p.m. sharp. An eerie green-gold glow emanates from the tanks, dappled by the shadows of sea creatures that glide silently through the water above.

Aquariums, museums and zoos have held slumber parties since the 1970s. The idea may have come from E.L. Konigsburg's 1968 classic, From the Mixed-up Files of Mrs. Basel E. Frankweiler, about two children who stay the night at New York's Metropolitan Museum of Art. Almost 40 years later, the concept gained new popularity thanks to the 2006 hit film Night at the Museum starring Ben Stiller as a new security guard who encounters mayhem after dark. The sequel, Night at the Museum: Battle of the Smithsonian, is scheduled for release in May.

What goes on behind those closed doors or gates at night depends on what's displayed inside. The American Museum of Natural History in New York capitalizes on the Night at the Museum movie by allowing guests to pretend they're Stiller patrolling the dark halls with a flashlight. Farther downtown, a professional mountaineer shows kids the ropes as he rappels down a rope suspended in the Rubin Museum of Art's 90-foot atrium; later that night, there's story-telling at base camp about the mysterious "yeti" that roam the Himalaya. In Hawaii, guests can wake up with wild animals at the Honolulu Zoos – from a safe distance.

"For the most part, you can make money off the overnights," said Michael Fritzen, director of family programs at the Skirball Cultural Center in Los Angeles. "It's a great way to capture a crowd for a special exhibit...The people who come may potentially be the next preservers of museums, zoos and botanical gardens."

Fritzen used to plan overnights for the Huntington, another Los Angeles cultural institution. One of the many children who went on the sleepovers now works there, he said, in part because of the attachment she formed years ago.

"People will come back as teens or interns," said Annette Sawyer, the Museum of Science, Boston's director of education and enrichment programs. "It's become so personal."

Begun in 1985, the Boston museum's overnights attract annually an average of 19,500 people, most of whom are children in scout or school groups; the program generates about $100,000 in net profit.

"It started as an opportunity to use the museum in down time," she explained. "There's something about being there when you're not supposed to be there; it's awesome."

Alexis Pace and Szu Burgess described their overnight at the Baltimore aquarium in similar terms. "We had a blast," said Pace, an artist in New York. "We could look across and see silhouettes of sharks swimming by. In the morning, we got to look at the dolphins more closely and talk to the handlers."

And, she added, "It was absolutely cheaper than a hotel and they feed you. We factored that in."

At "Sleepover with the Sharks," guests can unfurl their sleeping bags on the carpeted floors of the underwater viewing area. (Courtesy of Flickr user Andrew Bossi)

The Children's Museum
West Hartford, Conn.
860-231-2830
For children in first through sixth grades
$30 per person
Activities are based on themes such as "Building Zone" and "Underwater Web." Take self-guided safari tours in the wildlife sanctuary, participate in two science workshops, use telescopes to view the stars (weather permitting) and see a planetarium show.

Carnegie Museum of Natural History
Pittsburgh, Pa.
412-622-3289
For families and children's groups
$35
A pizza party is followed by eight activities tied to themes such as "Nighttime on the Nile," "CSI & DNA" and "Dino-ROAR."

Sen. John Heinz History Center
Pittsburgh, Pa.
412-454-6000
For children with adults
$35
Starts this spring. Meet costumed re-enactors of George Washington and Meriwether Lewis, who embarked on his historic exploration of the West from Pittsburgh. See late-night moves and the stars from the fifth-floor deck.

COSI (Center of Science and Industry)
Columbus, Ohio
614-228-2674
For children in third through sixth grades
$37 per person
After dinner, participate in workshops that connect to museum exhibits, see a film on the seven-story-tall movie screen, and participate in "Dance Mania."

Wisconsin Maritime Museum
Manitowoc, Wisc.
920-684-0218
For groups of 20 people more than 6 years old
$39 per person
Sleep aboard a World War II submarine. Tour parts of the sub closed to normal tours and visit the museum.

Honolulu Zoo
Honolulu, Hawaii
808-971-7171
For anyone at least 4 years old
$50 per person ($40 for members)
Eat a buffet dinner, and then take guided walking tours of the zoo at night. Have s'mores around a campfire before sleeping in tent or under the stars.

Museum of Science, Boston
Boston, Mass.
617-589-0350
Open to schools and organizations for children in first through sixth grades
$45 per person
Participate in workshops that explore science, see "Lightning!" in Theater of Electricity, and sleep beneath a dinosaur.

Buffalo Museum of Science
Buffalo, N.Y.
716-896-5200
For children and adults
$50 for one adult and one child ($45 for members)
The program emulates "Night at the Museum" by letting guests help close up the museum through activities and scavenger hunt.

National Aquarium, Baltimore
Baltimore, Md.
410-576-3800
For children and adults
$79.95 per person ($69.95 members)
See the dolphin show, and then have dinner. Participate in workshops, tour aquarium exhibits, kitchens for animals and the feeding area. After breakfast, meet dolphin handlers.

American Museum of Natural History
New York, N.Y.
212-769-0218
For children between 8 and 12 years old
$129 per person ($119 members)
See an IMAX movie, live animal exhibits, and explore fossils by flashlight. Sleep beneath 94-foot-long blue whale, beside famous dioramas of North American mammals or at near geologic formations. 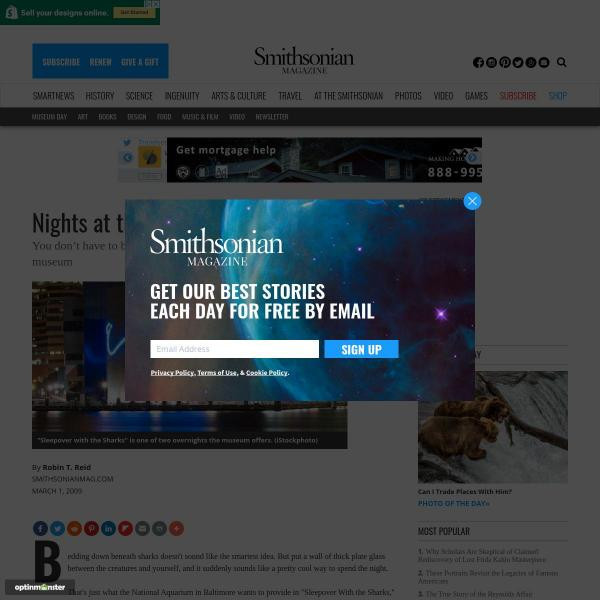