Does This Japanese Restaurant Chain Foretell the End of the Waiter?
Description

As if struggling actors didn’t already have it hard enough. In Japan, changing times have given rise to a new breed of mercilessly efficient automated restaurants that can easily service an entire busy day’s worth of hungry patrons without the need for a staff of waiters, chefs or even dishwashers.

The most popular of these is Kura, where a sushi plate will run you only 100 yen, the equivalent of $1.00. Such low prices are made possible by gutting as much of the “human touch” element that has long been ingrained in how eateries are typically run out of the dining experience. For instance, whereas new customers would traditionally be seated and given a menu by a friendly host, visitors to Kura seat themselves and are greeted by an interactive touchscreen menu positioned next to the table, which allows them to browse various food items and make selections or to input special requests. Below that is a winding conveyer belt system that carries several covered dishes of different types of sushi and main courses while a separate conveyer right above delivers specific orders. To maintain freshness, each plate has a scannable label that enables the computerized system to keep track of how long a particular sushi item has been kept on the rotation and automatically disposes of it after a certain amount of time.

Behind the curtain, orders are put together by employees whose duties, not surprisingly, resemble those of an assembly line factory worker more than a trained chef. With the assistance of a robot programmed to spit out clumps of rice, the assembler tops off each piece with cuts of fish and other varieties of seafood that had been prepared earlier, to exact specifications, at a local plant. Once it’s time for the check, customers dispose of the plates though a small table-side chute that sends them to another area to be counted, machine-washed and then back to the assembly line for reuse.

Reviews of automated restaurants, as you might suspect, are mixed. ”It’s another art for eating. I like it!” a diner at Baggers, an automated joint in Nuremberg, Germany, told BBC News reporter Steve Rosenberg. Another said, ”It’s more for young people than old people. My mother was here yesterday and she needs my son’s help to order.” A report in the New York Times re-tells the story of how such restaurants emerged and successfully took shape, mainly as a response to a dwindling customer base, due to the country’s ongoing economic struggles and an aging population that prefers not to eat out. Kura’s founder, Kunihiko Tanaka started the company in 1995 on the premise that, as efficient as Japanese restaurants had become over the years, there were still plenty of ways to cut costs without compromising the quality of the dining experience. With this in mind, he took the already established practice of serving food on conveyer belts, which started in the late 1950s, mixed in more advanced automation technologies and threw in a dash of IT. His goal was to trim down the somewhat bloated way food establishments conduct day-to-day operations. At Kura, the only humans deemed necessary are the assemblers and a handful of managers who’s main responsibility was to ensure that customers left satisfied and that everything went swimmingly.

Takeshi Hattori, a company spokesperson, told the New York Times that a small staff was enough to service a restaurant that seated a maximum of 196 people.

With 262 locations nationwide, Kura’s strategy has been a profitable one, to say the least. And who knows? These robo-eateries may soon make their way across the Pacific and open up in our neighborhoods, what with our growing preoccupation with constantly being plugged showing that our deepening love affair with technology is only deepening. Smartphones, for instance, have increasingly become a kind of mental sanctuary, a way for people to happily disengage from those around them. A study conducted by the Pew Research Center (PDF) reveals that thirty percent of young adults (18-29 years old) surveyed said they’ve pretended to be using their phone in order to avoid interacting with others. A Japanese design firm has even created the “Anti-Loneliness Ramen Bowl,” a soup bowl into which you can dock your iPhone.

However, I personally wouldn’t expect automated restaurants to catch on the U.S., considering that such an extreme approach to automation can make having a meal feel a bit too impersonal for most. Dining out in the U.S. is still considered primarily a social activity and though Kura customers can easily refill their beer mug themselves at one of the self-service machines, we Americans still love our bartenders. But then again, robots won’t ever get fussy over the tip. 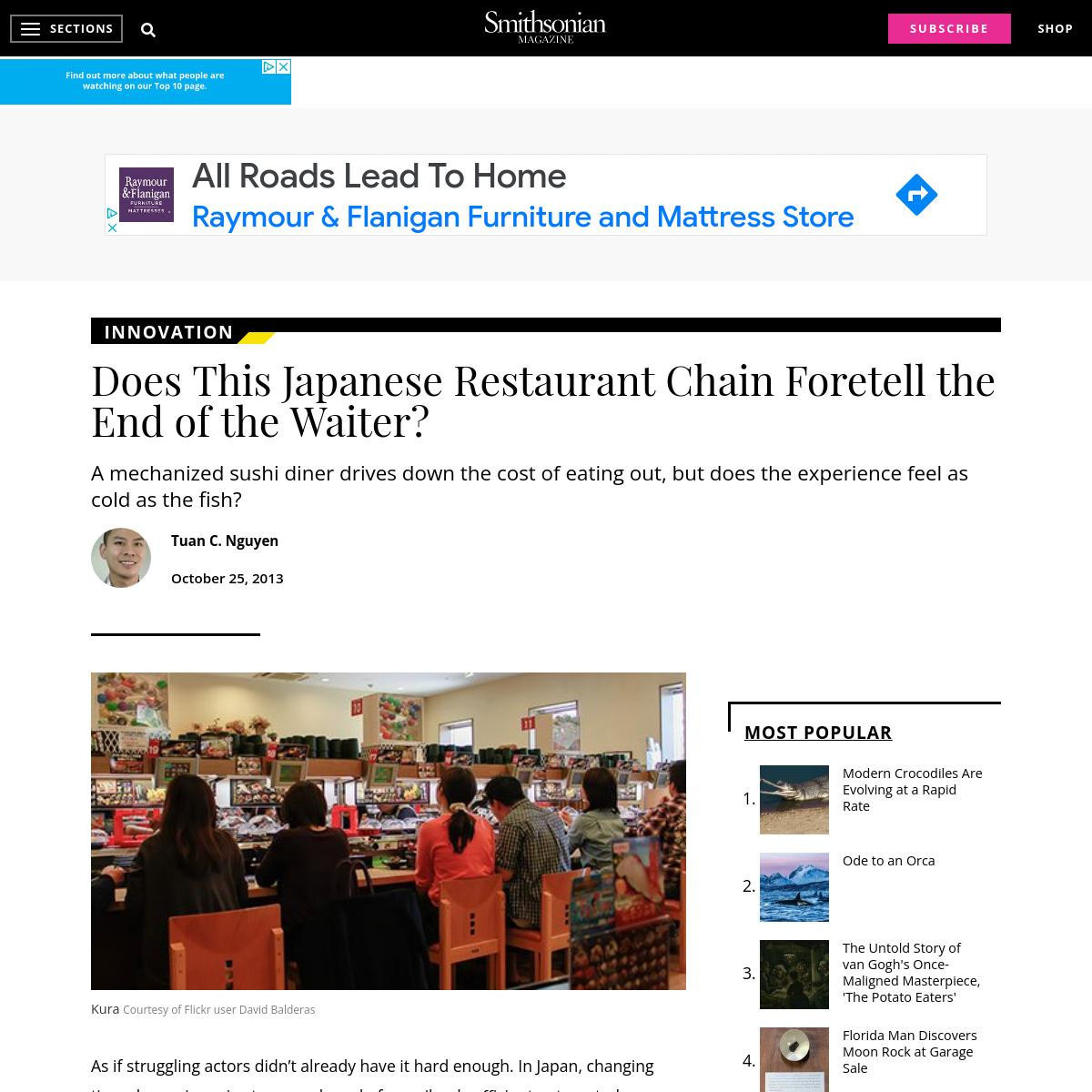