Unless you know how to handle a scalpel and have some detailed knowledge of anatomy, Antarctica could be the least convenient place to suffer appendicitis—but it’s happened to researchers more than once. Photo courtesy of Flick user U.S. Embassy New Zealand.

If you’re frustrated with medical care in the United States, try getting appendicitis in Antarctica. This potentially deadly condition can strike essentially anyone at any time—and no time was less opportune for Leonid Rogozov than April 30, 1961, at Novolavarezskaya Station, when the 27-year-old Russian scientist was the only doctor within 1,000 miles. After several days of pain, Rogozov concluded he had appendicitis and might die unless he did something. So he lay down in a hospital cot, had assistants tilt a mirror just above his lower belly, administered a shot of Novocain and called for a scalpel. In an epic feat of bravery and anatomical mastery, Rogozov sliced himself open, found his appendix, removed it, sutured himself shut again and proceeded with the finer things in life at the bottom of the world. A similar episode occurred on February 13, 1984, when Dr. Igor Mogirev removed his companion Valentin Gorbachev’s appendix during a tractor journey between an Antarctic landmark known as Dome C and Mirny Station, from which the team was about 600 miles away. The operation was successful—and conducted in the blistering cold after the diesel heater was shut off to keep the fumes from entering the tent and Gorbachev’s abdominal cavity.

The onset of appendicitis, which involves an organ that we don’t even need to begin with, often causes pain around the belly button that then “moves” to the lower right corner of the abdomen, according to this medical advice website. Such a pattern of pain is a flaming red flag, and if nausea, constipation, swelling of the abdomen and fever follow, one should seek aid promptly. May you not be the only doctor on the continent. And if you are, here’s hoping you brought the Novocain. Of course, the human body is a complex piece of living geography, and ailments may strike in many forms, in many hard-to-reach nooks and crannies. Following are a few illnesses and conditions to be wary of when far away from home.

Giardia. How often have you wished during a hot hike in the mountains that you could step to the edge of a stream, kneel and have yourself a bellyful of cold, clear snowmelt? Of course, most of us know better than to drink the water—because nearly everywhere, in waters still or moving, Giardia lamblia lurks. This bacterium is not a killer—just a nuisance, really, that causes diarrhea and other digestive problems within seven to 14 days of infection, and which may remain in a person’s body for years. Wild and domesticated animals are generally blamed as the source of local Giardia populations in lakes and streams, though in much of New Zealand—home to tens of millions of sheep, cows and other nonnative mammals—locals swear their water is safe to drink. During my time there in January and February, I drank directly from streams and lakes almost every day during several backcountry outings. I never got sick, though that isn’t proof that the waters were clean. You should bring a pump, or at least water purification tablets.

Montezuma’s Revenge. In case you need to be told again, don’t drink the water. In fact, if you’re in parts of Latin America, keep your mouth shut in the shower and drink only bottled water—even when just brushing your teeth. Because Montezuma’s Revenge will spoil your trip to Mexico if you give this bugger a chance. Caused by Salmonella, E. coli and other little critters, Montezuma’s Revenge is itself not a disease but, rather, just a collection of symptoms like stomach upset and diarrhea. In other parts of the world, similar illnesses strike tourists, who may be told they’ve got Delhi Belly or the Turkey Trots. Fortunately, this condition only lasts a few days in most cases and is an annoyance more than a danger—though surely few travelers’ tales can be more gripping than that of Montezuma’s Revenge kicking in on the airplane.

Dehydration: So you’re damned if you drink the water—but you’re also damned if you don’t. A seemingly simple condition with a simple cause and a simple fix, dehydration can kill when water is simply not to be had. The first of its signs may be bright yellow urine. Hours may still pass before one actually feels thirsty, at which point the mouth grows sticky and a person may grow sluggish and lethargic. In advanced stages, the skin may seem to retract in super-slow motion, like bread dough, when pinched between two fingers, and if you feel confused and dizzy and notice that you are no longer able to sweat, it’s official: You need a drink of water. NOTE: Dehydration may occur as a result of another illness that has caused vomiting and/or diarrhea.

Chondromalacia. Say goodbye to your plans to spend three months bicycle touring through Southeast Asia if this nasty condition appears in your knee. Chondromalacia occurs when the cartilage protecting the ball-and-socket joint of the knee becomes inflamed. In severe cases of continued use even after symptoms begin, the cartilage can be worn down to the bone. Chondromalacia causes a dull, throbbing pain inside the knee, with difficulty walking down stairs a distinct symptom. You may even hear cracking and scraping. Icing the joint helps, as does—unfortunately—long periods of rest. Chondromalacia may be caused by the knee-cap beginning to travel off-center in its recurring path over the bone of the knee, causing irritating rubbing. Doctors like to say that treatment is simple—just rest the knee for several months, keeping it elevated and iced every day, while practicing a variety of awkward and seemingly futile leg raises and quad-building exercises. Other overuse conditions that can end a long, body-powered voyage include iliotibial band syndrome, tendonitis and a strained or torn Achilles tendon. Inquire at a bike shop before your next tour to see that your seat height is appropriate, your pedal cranks the right length and your clip-in shoe cleats are properly set.

SARS (Severe Acute Respiratory Syndrome). The virus that infected some 8,000 people, killing more than 900 of them, in 2002 and ’03—when it was first identified—has caused a small scare after the second man within months was recently infected in England. The 49-year-old is alive and now being treated, though a 60-year-old Saudi Arabian man died earlier this year of the disease. Scientists have reported that both men were infected by what seems to be a new, or at least previously unknown, strain of the virus (which the World Health Organization has reported is, fortunately, not easily transmitted). SARS symptoms are initially similar to those of a common cold—but with a notable difficulty in breathing. Helpful treatments, including antibiotics, can be administered in patients who suspect they are infected, even if tests later prove negative. The World Health Organization has not issued any formal travel warnings—just a global alert—in response to the latest SARS case, but this is a story worth following. Hantavirus. Fear has crept through Yosemite National Park—as quietly as a mouse. For nine people were infected this summer by the deadly rodent-carried Hantavirus. Three people have died, and the park’s staff is now being served by a voluntary testing plan (even though, mysteriously, not a single employee of Yosemite’s 3,000 annual workers has been infected—yet). The disease, which can take six weeks to incubate in a person before taking effect, usually involves flu-like symptoms at first, like nausea, headache and aching joints, which escalate into organ failure. Hantavirus is carried by deer mice and other like vermin and can be spread via rodent feces, saliva and urine, and it can go airborne via dust particles. Fortunately, the disease is rare, infecting just 30-some people in an average year in America. The death rate, though, among victims averages about 30 percent.

Mushroom poisoning. Mushrooms don’t bite, and the most poisonous of them are only dangerous if eaten (myths abound that just touching a “toadstool” can kill you). Indeed, the only reason mushroom poisonings happen is that some hikers can’t resist taking unidentified mushrooms home, sautéing them in olive oil and serving them at potlucks. The mushrooms involved in many, if not most, serious poisonings are two species of the Amanita genus—A. phalloides, usually called the Death Cap, and A. bisporigera, commonly known as the Destroying Angel. Both reportedly taste quite nice, and guests at the dinner table will likely praise their host’s prowess in garnering dinner from the wild, wild woods—until the stomach ache hits. That’s your liver failing. Go get help. Two to three people have died of mushroom poisoning in America every year for the past 30 years. Note that the death rate runs between 10 and 50 percent of all poisonings—and just getting sick from a Death Cap isn’t fun, a liver transplant often being the only cure. Some people may experience frightening but nonfatal allergic reactions to otherwise coveted edible fungi, like the chicken of the woods, the shaggy parasol and the inky cap (which can cause poisoning if alcohol is consumed within days on either end). Know your mushrooms, and—when eating at a party—know your host. Mushroom rookies should not host mushroom dinners. And, keep your dog leashed in mushroom country. Every year, dogs die when they eat Death Caps. If you couldn’t recognize this mushroom in a lineup, then maybe you shouldn’t be out foraging. It’s the Death Cap, one of the most poisonous mushrooms in the world. Photo courtesy of Flickr user randomtruth.

Learn more about maladies and science-based remedies in Where There Is No Doctor: A Village Health Care Handbook. Available here for sale (or as an online PDF via this website), the handbook is hundreds of pages long, bulky as a Bible, and describes everything from treatment for snakebites to witchcraft cures that don’t work to identifying appendicitis to the threats of mosquitoes, and so on and so on. First published decades ago, the book was revised and updated for its 2011 reprinting.

Disclaimer: This blog post is not meant to be used as a medical guide, and anyone who suspects they may be seriously ill should visit a qualified doctor.

Next week: In detail on snakes. No, I didn’t forget about snakebites. Rather, I’m saving this giant topic for next week. For a quick preview, snakes bite as many as 5.5 million people every year, killing at least 100,000, according to the BBC. In India alone, a million people may suffer snakebites every year. Clearly, this is a topic that deserves a blog post all its own. 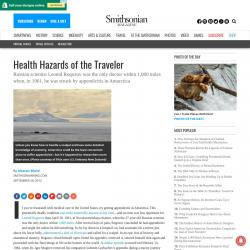