During World War II, amid a gasoline shortage, many European commuters had to improvise, often resorting to installing clunky power generators that converted wood into fuel for their engines. (Check out this rig!) But once fossil fuels were readily available again, these briefly popular machines were, for the most part, tossed into the dustbin of history.

Today, in a renovated former artists’ space in Berkeley, an alternative energy startup, has slowly begun resurrecting this more than century-old technology known as gasification. Over the course of five years, All Power Labs has sold over 500 made-to-order versions of their signature invention, a $27,000 refrigerator-sized biomass-converting device called the “Power Pallet.” Customers, most of whom reside in poorer countries like Ecuador, Haiti, Thailand and Nicaragua, obviously are drawn to the fact that the contraptions can generate clean burning fuel for about 10 cents per kilowatt hour, about one-sixth of what power companies typically charge. But that’s not the only perk. Syngas, the synthetic fuel that’s produced from gasification, is created by putting biomass such as corn husks or wood chip through a decomposition process known as “pyrolysis,” where the combination of a low oxygen environment and heat removes impurities while leaving behind a byproduct known as biochar. A nutrient rich charcoal, biochar can be used as fertilizer to help grow trees, crops and many other kinds of plants that scrub carbon dioxide from the atmosphere. Technically speaking, the Power Pallet system may be the only carbon-negative energy technology on the market, meaning the entire gasification process removes more carbon dioxide than it generates.

“When you think about it, nature’s most tried and tested tool to take carbon out of the air is plants,” says Tom Price, the company’s sales director. “If you can grow a tree, you can capture a big chunk of what’s causing global warming.”

The company, made up of artists who occupied what was an artist space known as “The Shipyard,” can credit the city of Berkeley for inadvertently kickstarting their enterprise. A series of code violations left officials no choice but to shut down the facility’s electricity, thus forcing the residents to experiment with alternatives like solar, which didn’t work out so well due to higher costs. Gasification came about as an accidental discovery that began the day the company’s CEO Jim Mason found an old instruction manual and decided to piece one together using old plumbing parts. Since then, Price says the standard art has gone away and the new art has been about looking at ways to hack the global energy problem.

Since we’re talking about resurrecting old technology, many of the kinks that made gasification an unappealing option back then still exist. For instance, gasification machines require a large amount of water filtration, which leaves behind what Price calls a “toxic mess.”

“Solid fuel is very difficult to use compared to gas. You basically have to charcoalize biomass to create a vapor rich in hydrogen to run an engine, which isn’t as easy as piping it out of the ground and refining it,” Price explains. “So liquid fuels, in most cases, are preferable in all respects except one; they are killing the planet.”

Undeterred, the team tapped into the unwavering “maker spirit” that Silicon Valley’s tech scene has become renowned for and started testing out ways to apply the latest automation innovations, such as sensors and process computerization, to regulate parts of the reaction chain. The idea was that if they could control crucial aspects like the smoldering temperature and cracking of the tar with precision, they could eliminate the need for water filtration. Ultimately, what they did was give the old gasifier a high-tech makeover.

Over the phone, Price mentions that he recently sold a Power Pallet to a family living in a rural part of Iowa. Yet, he doesn’t think gasification would make sense for filling the need for energy in the developed world—not now at least. Pumping out hydrogen gas to the degree that it’s practical involves bringing in truckloads of wood and whatever usable forms of biomass are available. And in urban settings, like New York City, for instance, infrastructure is already built so that centralized power plants can supply electricity in a manner that’s convenient for everyone. Even so, Price finds this approach to be not only environmentally unfriendly, but also very inefficient, considering that communities have to rely on sources like coal and constantly-maintenanced power lines to keep buildings and streetlights running. The most fertile ground for developing and implementing a new, less centralized power grid system, he argues, are undeveloped regions of the world that have remained largely agricultural.

“We don’t have the automation to where you can push a button and it goes. This is machinery that requires a trained operator,” Price says.”But when you’re in a place in which the alternatives are either nothing or something very expensive, the effort becomes worth it.”

An example of a situation in which the company’s technology has enabled locals to operate a fully self-sustainable business can be found in Kampala, Uganda, where product engineer Richard Scott helped another local energy startup named Pamoja Cleantech to develop gasifiers that use leftover corn cobs as an energy source for corn flour mills. Instead of being left out to spoil, growers not only can turn the crops into cash, they can also turn the discarded bits back into fuel to run the mills.

With business booming, the All Power Labs team has shifted some of its focus toward developing new reactors that can run longer, with less maintenance, and use a wider variety of biomass, like rice husks, found in abundance in large swaths of farmland in Asia. He hopes that in five years these machines can make fuel from any form of biomass.

“No one’s trying to pass this off as a new idea. Heck, there’s even open source blueprints on our website that you can download and use to build your own,” he adds. “But sometimes, the best ideas are the ones we already had.” 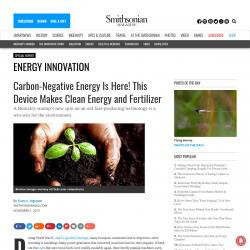 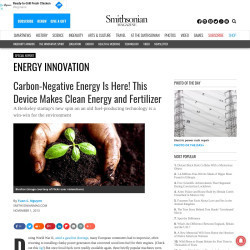