Change Author / Owner : The Deep South, As Seen Through the Eyes of Renowned Photographer Steve McCurry

Over the course of his career, Steve McCurry has taken some iconic photographs, among the most memorable is the “Afghan Girl” portrait he captured while on assignment for National Geographic in 1985. In the years since, McCurry has worked with Smithsonian magazine on multiple occasions, and his work has appeared in countless other publications, books and exhibits. Much of his best-known work has come from remote regions: places that are inaccessible and distant, or difficult to relate to. This fall, he has two book projects coming out, each about places that could, in their own ways, be considered remote. His photographs of the American South will appear this week in famed travel writer Paul Theroux’s new book, Deep South. (An early dispatch of this trip from Theroux, and featuring McCurry’s photography, appeared in Smithsonian in the July/August 2014 issue.) Next month, a collection of his photographs from India will be released by Phaidon. McCurry spoke with Smithsonian.com about both projects in a two-part Q&A. An edited and condensed version of the first part, on Deep South, is below.

How did this collaboration come about in the first place?

Well, Paul [Theroux] and I have been working together since 1984. We did a book together, we did an assignment together in Costa Rica. I visited him at his home in Hawaii. We have a long history of working together.

I think his writing is direct, it’s simple, it’s understandable. He has great insight into people, into human behavior. He’s one of the greatest storytellers. He’s written like 50 books, he’s simply a great storyteller and he has a real insight into human nature.

Many of those same things could be said about the way you take photographs. I’m curious if you think there’s a certain humor he brings to his projects, for instance. I’m curious if there is stylistic choices like that that jump out at you that may differ from how you approach documentary journalism.

Paul has a keen sense of humor and a sharp wit. I think that there is a lot of humor in his writing. And I think he’s able to often cut to the core in, sometimes, a very humorous way, getting to the point of a situation, or cutting through some of the nonsense to get some truth in situations.

Were there any particular images or people or places that really stuck with you?

We met a number of black farmers. It was fascinating to see what their lives were like throughout the years, some of the difficulties they had, operating large farms in the South.

Were there particular photographs that really stuck with you?

Mary Ward Brown was this very interesting writer who actually died shortly after we photographed her and interviewed her. She lived in this extremely remote part of Alabama, in this small house, yet she was this very literary person. She was a wonderful writer. Her house was full of books and art. Very sophisticated, very elegant, very witty. It was fascinating to see this woman in the middle of nowhere, in the middle of Alabama, off in the middle of fields of cotton or whatever.

And then there was this bridal shop in Philadelphia, Mississippi. That was interesting because it was sort of ghostly. It was a very rainy Sunday afternoon and it was completely empty, and there was this one bridal shop in the middle of this town, it was just surreal. You felt like you were in the twilight zone. Just a bride dressed up in a white gown on an empty street.

And then there was [my photo of] Route 301 in Allendale, South Carolina. All the traffic now really goes on the interstate. I used go down to Atlanta and I would travel on this road. It’s this abandoned, desolate, forgotten piece of highway that the world has really passed by. It’s fascinating because it’s a piece of history now. It’s not relevant.

Do you feel that you approach documenting a place like the South and a place like India the same way? Or do you have different treatments for different places?

Let me answer your question that way: I see absolutely zero difference between working in the southern part of the United States and working, say, in any place in India. I see it as exactly the same thing. 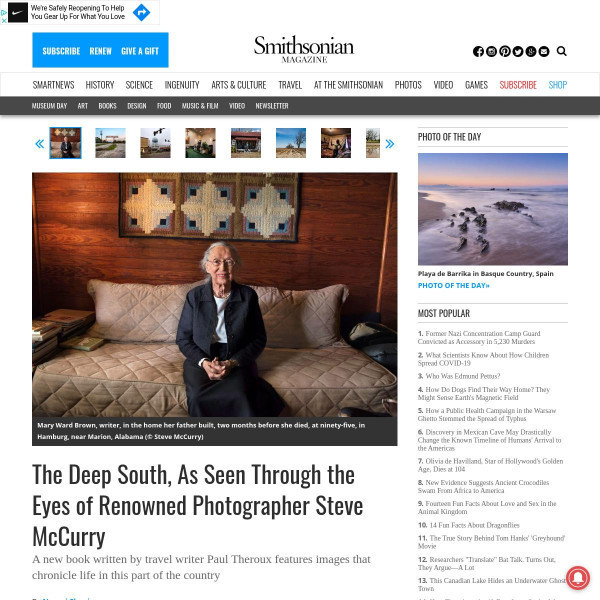