Change Author / Owner : Why VHS and Five Other Formats May Live Forever

The Japanese company Funai Electronics will produce its last batch of VCRs this month, officially pushing that technology into the dustbin of media history. Movie lovers of a certain age fondly remember browsing Blockbuster or the local video store for the tapes, which were introduced in the United States in 1977. Twenty years later, however, when DVDs hit the scene in 1997, the new technology quickly gobbled up market share, reports Ananya Bhattacharya at Quartz. But 2005 was the true death knell of the technology, Bhattacharya writes—that’s when Circuit City and Best Buy stopped carrying the machines. And in 2008, the last major supplier of VHS tapes stopped producing them.

But if the last 50 years of media turnover is any indication, VCRs and VHS collections will still be around for a long time to come. As of 2014, almost 60 percent of Americans still had the machines in their homes, and it could be just a matter of time before they a trendy throwback, like some other discontinued formats that have survived the long haul. Check out these antiquated technologies that have managed to withstand the test of obsolescence.

When Kodak launched the Super 8 film camera in 1965, it was the Baby Boomer equivalent of the iPhone, reports Remy Melina at LiveScience. Unlike previous home movie cameras which had to be threaded into the camera by hand, Super 8 users could just pop in a cartridge, shoot 3 minutes of the warm, grainy film and turn them into a developer. In 1973, Kodak added sound to the cameras, and it became the barbecue and Christmas morning camera par excellence for two decades until VHS camcorders challenged its supremacy in the 1980s. Even though production of Super 8 cameras stopped, affection for the format has not. Steve Rose at The Guardian writes that directors including Steve McQueen, Steven Spielberg, Quentin Tarantino and JJ Abrams have all expressed love for the warm format, and many began their filmmaking careers using the format. In fact, Abrams and Spielberg collaborated on the critical darling Super 8 in 2011.

Plenty of non-superstar directors love the format too. That’s why in January, Kodak, which never stopped making film for the cameras, showed off a prototype of 21st-century version of the Super 8, which will use the film but also integrates into a digital world.

For the vast majority of people, floppy disks, whether they are the big eight-inch, more manageable five-inch, or once ubiquitous 3.5-inch versions are gone and dead, uselessly sitting in a decaying media storage box somewhere in the basement. Thumb drives, CDs and cloud storage made the tech obsolete for typical computer users more than a decade ago.

But according to the BBC, the disk maker Verbatim still ships out thousands of 3.5-inch floppies every month. “The death of the floppy disk has been heralded many, many times,” Ian Rainsford at Verbatim says. “I think once Microsoft started shipping Windows on CDs it was sounded for the first time and that was 21 years ago.”

The disks persist primarily, Rainsford explains, because they are used to control industrial machines that have a long work life. It does not make sense to get rid of expensive equipment like knitting machines, lathes and cutters just to upgrade its software, he says. In fact, it was recently revealed that the computers that coordinate the Pentagon’s nuclear arsenal still run on 8-inch floppy disks. Fortunately, that system is scheduled to get an upgrade next year.

According to Hugh McIntyre at Forbes, vinyl records have been a lone bright spot in the record industry over the last decade. As CD sales have tanked and digital downloads have stagnated, vinyl sales keep going up, increasing by 30 percent in 2015, to about 12 million albums. And its not just a nostalgia trip—while Pink Floyd and The Beatles do appear on the top 10, Adele, Hozier, Taylor Swift and Alabama Shakes also made their mark on vinyl.

In the late '80s, cassettes and newfangled CDs had vinyl on the ropes, and in the 2000s digital downloads and streaming threatened all of those formats. While CDs and cassettes have taken a beating (though cassettes have some retro cachet), vinyl has made it through. One reason, John Harrison at The Guardian reports, is that listening to an entire album is a novel experience for younger people, and listening to music out loud with friends versus jamming in earbuds at a coffee shop also appeals to them. Also, many argue its imperfections make vinyl warmer and more intimate. “Things sound different. They take on a life of their own; they come at you. Vinyl brings something else to it,” DJ and vinyl aficionado Colleen Murphy tells Harrison. “When you listen to CDs after you’ve been listening to vinyl for a long time, it sounds a bit … synthetic.”

While some envision a future where even libraries do away with most of their printed books, readers loyal to physical texts aren’t having it. In 2013, Megan Rose Dickey at Business Insiderreported that based on a market research survey, almost 60 percent of Americans reported they had no interest in buying e-books. In the UK, e-book sales dropped for the first time in 2015. And, something no one thought they’d see after Amazon launched the Kindle in 2007, books sales modestly increased in 2014 and 2015, according to Publishers Weekly.

That’s not to say printed books will ever reign supreme, but they are unlikely to go away completely as some tech watchers have predicted. Instead, there will be a mix of both format for years to come. “Paper books and e-books are each distinct modes of technology, with distinct strengths and weaknesses,” Gizmodo blogger Matt Novak writes. “They can co-exist in harmony and almost certainly will forever.”

In March 2016, just a few months before the official death of the VCR, Sony sent out its last batch of Betamax tapes. The format developed by the company in the 1970s is best known for being at the losing end of the format wars, in which VHS, developed by another Japanese company JVC, won. While Beta tried to corner the consumer home video market, most major studios went with VHS, and Beta began its downward spiral, with Sony discontinuing its machines in 2002. It might not be immediately apparent why the company continued to make the tapes for so long. However, Sony may have the last laugh, as its Betacam format—a professional version of Betamax used in television production—became the industry standard when it was introduced in 1981. That format and its upgrades are still popular in the production industry today. 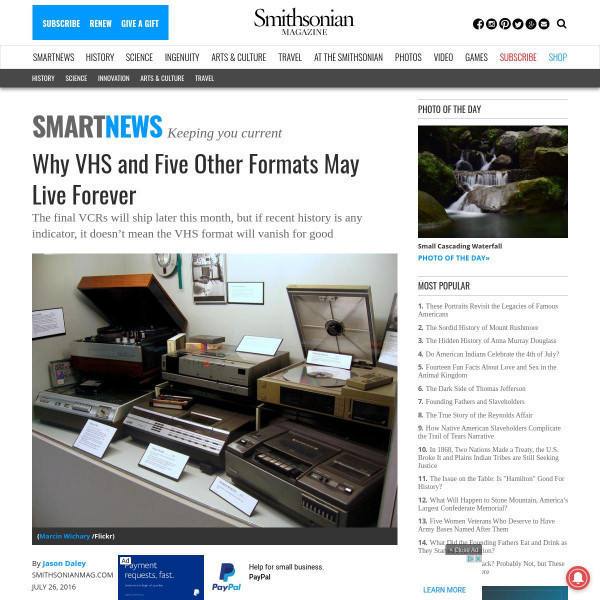