Are Megacities Friend or Foe in the Fight Against Climate Change?

It’s the age of the city. Today more than half the world’s population can be found in cities, and megacities—those with populations of 10 million or more—are on the rise. The world’s largest megacity, Tokyo-Yokohama, joins two cities and multiple Japanese prefectures to cover 5,200 square miles, and it houses a population of some 37.5 million individuals.

For many people, cities offer economic, educational or social opportunities not available in smaller, rural environs. Urban lifestyles can also have environmental advantages when public transportation replaces long trips in gas-guzzlers and residents are tucked into smaller, more efficient housing. But are modern megacities a blessing or a burden when it comes to climate change? While greenhouse gas emissions on a per capita basis can be lower in dense urban areas, cities are still responsible for 70 percent of emissions worldwide, according to the United Nations Human Settlements Programme.

"[They] are the source of the problem and the source of the solution," says Patricia Romero Lankao, who leads the Urban Futures initiative at the National Center for Atmospheric Research in Colorado. Cities are poised to tackle the problems of climate change because they have economies of scale that promote efficiency, as well as research centers, grassroots movements and opportunities for invention and innovation, Romero Lankao notes. “It’s like every human being—we have good and bad, and cities are the same.”

Combating climate change is ultimately in a city's best interest—sheer size can’t protect megacities from direct impacts such as rising temperatures and extreme events like hurricanes and droughts. Already warmer than the countryside because of the urban heat island effect, cities in tropical and sub-tropical areas—such as Mumbai, Bangkok and Lagos—could soon become too hot to handle, especially for those who cannot afford air conditioning. “Cities may become more uncomfortable spaces to live in the future,” says Alex de Sherbinin, a geographer at Columbia University’s Center for International Earth Science Information Network.

Coastal megacities face additional threats from sea level rise, which is caused by ocean water expanding as it heats up, plus the additional volume from melting glaciers and ice sheets. Though the rise has been slow, already coastal flooding has increased, particularly during hurricanes and storms. “That’s why you see a city like New York was at risk from [Hurricane] Sandy,” notes Romero Lankao. By 2100, between 0.2 and 4.6 percent of the global population—potentially hundreds of millions of people—could experience annual floods, according to a study published earlier this year in the Proceedings of the National Academy of Sciences.

Image by John Van Hasselt/Corbis. Flooding is not uncommon in Jakarta, Indonesia (pop: 29,959,000), the second-largest megacity in the world. But it could get even worse. The country’s National Council on Climate Change warned in 2013 that, unless action is taken soon, half the city could be underwater by 2030 due to climate change. (original image)

Image by FRANCIS R. MALASIG/epa/Corbis. The megacity of Manila in the Philippines (pop: 22,710,000) regularly floods during monsoon rains and extreme weather events, such as 2009's Typhoon Ketsana, which dumped a month's worth of rain in less than a day. But Manila faces other challenges that may be exacerbated by climate change, including declining aquifers and high levels of air pollution. (original image)

Image by Markus Hanke/www.MarkusHanke.de/Corbis. Most of the lakes and rivers around Shanghai, China (pop: 22,650,000) are already heavily polluted, and the most recent Intergovernmental Panel on Climate Change report warns that the city is likely to face decreased water availability for its growing populace. (original image)

Image by Kevin Downs/Corbis. Hurricane Sandy gave the New York metro area (pop: 20,661,000) a wake-up call regarding the dangers of extreme weather events. The storm flooded large swaths of coastal communities and drowned tunnels and subway stations. Two years later, the region is still recovering, but Sandy has spurred the development of one of the world’s most ambitious plans for adapting to climate change. (original image)

Image by Kenneth Garrett/National Geographic Society/Corbis. Climate change has brought more heat, drought and flooding to Mexico City (pop: 20,300,000), a megacity already stressed by rapid growth, pollution and the overexploitation of its water resources. But the city has begun to tackle its challenges by modernizing its water treatment system and working to improve air quality and energy efficiency. (original image)

Image by Frederic Soltan/Corbis. More than half the residents of Mumbai, India (pop: 17,672,000) live in slums, often located in low-lying areas prone to flooding. A devastating flood in 2005 killed some 5,000 people, and since then the government has worked to improve river flow and flood defense systems. However, there are gaps around the slums that leave them still vulnerable. (original image)

Image by GEORGE ESIRI/X00996/Reuters/Corbis. Lagos, Nigeria (pop: 12,549,000) is one of the world’s fastest-growing megacities. It has already experienced flooding in its low-lying slums. An artificial island, Eko Atlantic, is now being constructed to provide sanctuary from rising seas—but only for those wealthy enough to afford it. (original image)

Image by Antonio Lacerda/epa/Corbis. Rio de Janeiro, Brazil (pop: 11,723,000) is experiencing higher temperatures and extreme rain events that have spawned flooding and landslides. The city has also been dealing with epidemics of dengue fever, a mosquito-borne disease that could spread as climate change increases temperatures and precipitation in some places. (original image)

Then there are the indirect effects. Weather-related disasters, such as drought, floods and hurricanes, temporarily displaced some 20.6 million people in 2013. When such events strike rural regions, they can send thousands of people streaming into cities, where supply systems are usually more reliable, de Sherbinin notes. But that can add pressure on a megacity if water, food, electricity and other resources are already limited. Some worry that such shortages could even spark violence and rebellion in cities on the edge.

Some projects meant to alleviate the consequences of climate change have already had unintended effects, driving even more people into the world’s megacities. More than 300,000 people have been moved to make way for China’s South-North Water Transfer Project, for example, which is meant to lessen water shortages in the arid north of the country. And that’s on top of more than a million people who had to make way for the Three Gorges Dam.

“There’s recognition that action needs to be taken, but it’s not always effective,” says de Sherbinin. Particularly in poorer nations, “they’re not going to be all that concerned about the slum dwellers who are going to be affected by major events.”

How a megacity manages the challenges presented by growth and climate change may matter more than size or even wealth, says Romero Lankao. Money certainly helps—Tokyo has far more resources to prepare for climate change adaptation than somewhere like Lagos. But other factors, such as social networks and government response, can also help a megacity prepare for climate threats.

“The best adaptation is mitigation,” Romero Lankao says. But megacities can take action in other ways to reduce their vulnerabilities, especially among the poorest. Bangladesh, for instance, has worked over the last few decades to improve the country’s disaster preparedness, reducing tropical cyclone-related deaths from hundreds of thousands in a single storm to less than 200 after a 2013 typhoon.

Climate change carries plenty of uncertainty, even for megacities. “There will be surprises,” Romero Lankao says. But inaction could come at too high a price, she warns. “If we don’t act now, we will lament our lack of action later.” 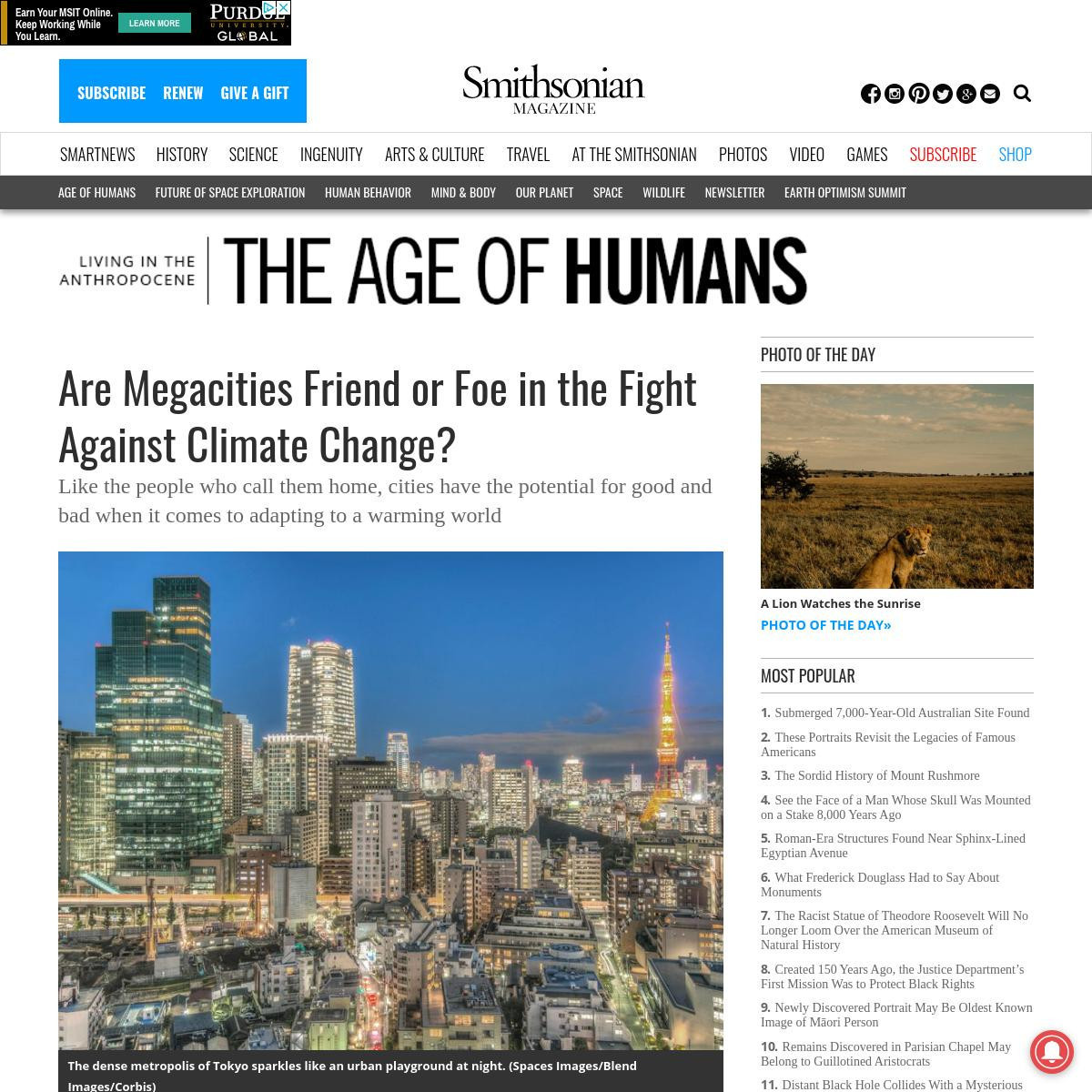