Your Tweets Can Predict When You’ll Get the Flu Simply by looking at geo-tagged tweets, an algorithm can track the spread of flu and predict which users are going to get sick. Image via Adam Sadilek, University of Rochester

In 1854, in response to a devastating cholera epidemic that was sweeping through London, British doctor John Snow introduced an idea that would revolutionize the field of public health: the epidemiological map. By recording instances of cholera in different neighborhoods of the city and plotting them on a map based on patients’ residences, he discovered that a single contaminated water pump was responsible for a great deal of the infections.

The map persuaded him—and, eventually, the public authorities—that the miasma theory of disease (which claimed that diseases spread via noxious gases) was false, and that the germ theory (which correctly claimed that microorganisms were to blame) was true. They put a lock on the handle of the pump responsible for the outbreak, signaling a paradigm shift that permanently changed how we deal with infectious diseases and thus sanitation.

The mapping technology is quite different, as is the disease, but there’s a certain similarity between Snow’s map and a new project conducted by a group of researchers led by Henry Kautz of the University of Rochester. By creating algorithms that can spot flu trends and make predictions based on keywords in publicly available geotagged tweets, they’re taking a new approach to studying the transmission of disease—one that could change the way we study and track the movement of diseases in society.

“We can think of people as sensors that are looking at the world around them and then reporting what they are seeing and experiencing on social media,” Kautz explains. “This allows us to do detailed measurements on a population scale, and doesn’t require active user participation.”

In other words, when we tweet that we’ve just been laid low by a painful cough and a fever, we’re unwittingly providing rich data for an enormous public health experiment, information that researchers can use to track the movement of diseases like flu in high resolution and real time.

Kautz’ project, called SocialHealth, has made use of tweets and other sorts of social media to track a range of public health issues—recently, they began using tweets to monitor instances of food poisoning at New York City restaurants by logging everyone who had posted geotagged tweets from a restaurant, then following their tweets for the next 72 hours, checking for mentions of vomiting, diarrhea, abdominal pain, fever or chills. In doing so, they detected 480 likely instances of food poisoning.

But as the season changes, it’s their work tracking the influenza virus that’s most eye-opening. Google Flu Trends has similarly sought to use Google searchers to track the movement of flu, but the model greatly overestimated last year’s outbreak, perhaps because media coverage of flu prompted people to start making flu-related queries. Twitter analysis represents a new dataset with a few qualities—a higher geographic resolution and the ability to capture the movement of a user over time—that could yield better predictions.

To start their flu-tracking project , the SocialHealth researchers looked specifically at New York, collecting around 16 million geotagged public tweets per month from 600,000 users for three months’ time. Below is a time-lapse of one New York Twitter day, with different colors representing different frequencies of tweets at that location (blue and green mean fewer tweets, orange and red mean more):

To make use of all this data, his team developed an algorithm that determines if each tweet represents a report of flu-like symptoms. Previously, other researchers had simply done this by searching for keywords in tweets (“sick,” for example), but his team found that the approach leads to false positives: Many more users tweet that they’re sick of homework than they’re feeling sick.

To account for this, his team’s algorithm looks for three words in a row (instead of one), and considers how often the particular sequence is indicative of an illness, based on a set of tweets they’d manually labelled. The phrase “sick of flu,” for instance, is strongly correlated with illness, whereas “sick and tired” is less so. Some particular words—headache, fever, coughing—are strongly linked with illness no matter what three-word sequence they’re part of.

Once these millions of tweets were coded, the researchers could do a few intriguing things with them. For starters, they looked at changes in flu-related tweets over time, and compared them with levels of flu as reported by the CDC, confirming that the tweets accurately captured the overall trend in flu rates. However, unlike CDC data, it’s available in nearly real-time, rather than a week or two after the fact.

But they also went deeper, looking at the interactions between different users—as represented by two users tweeting from the same location (the GPS resolution is about half a city block) within the same hour—to model how likely it is that a healthy person would become sick after coming into contact with someone with the flu. Obviously, two people tweeting from the same block 40 minutes apart didn’t necessarily meet in person, but the odds of them having met are slightly higher than two random users.

As a result, when you look at a large enough dataset of interactions, a picture of transmission emerges. They found that if a healthy user encounters 40 other users who report themselves as sick with flu symptoms, his or her odds of getting flu symptoms the next day increases from less than one percent to 20 percent. With 60 interactions, that number rises to 50 percent.

The team also looked at interactions on Twitter itself, isolating pairs of users who follow each other and calling them “friendships.” Even though many Twitter relationships exist only on the Web, some correspond to real-life interactions, and they found that a user who has ten friends who report themselves as sick are 28 percent more likely to become sick the next day. In total, using both of these types of interactions, their algorithm was able to predict whether a healthy person would get sick (and tweet about it) with 90 percent accuracy.

We’re still in the early stages of this research, and there are plenty of limitations: Most people still don’t use Twitter (yes, really) and even if they do, they might not tweet about getting sick.

But if this sort of system could be developed further, it’s easy to imagine all sorts of applications. Your smartphone could automatically warn you, for instance, if you’d spent too much time in the places occupied by people with the flu, prompting you to go home to stop putting yourself in the path of infection. An entire city’s residents could even be warned if it were on the verge of an outbreak.

Despite the 150 years we’re removed from John Snow’s disease-mapping breakthrough, it’s clear that there are still aspects of disease information we don’t fully understand. Now, as then, mapping the data could help yield the answers. 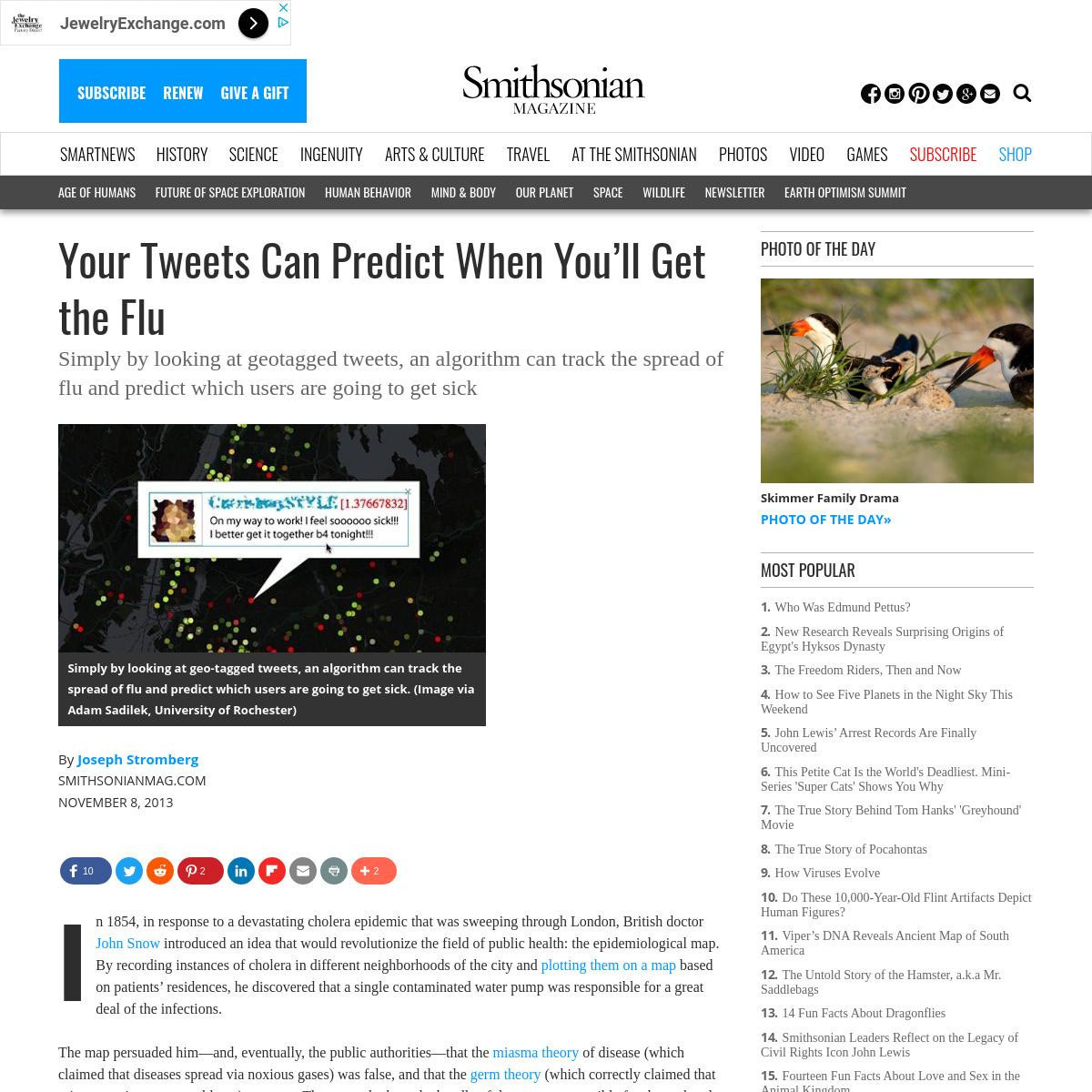