The Founding Fathers and the Women, Not Their Wives, Whom They Wrote To

When the term “platonic friendship” comes to mind, we’re likely to think of the movie When Harry Met Sally or the latest pop psychology article examining whether these relationships are possible. But the founding fathers? Our nation’s first presidents had close, loving friendships with women—women who weren’t their wives or close relatives. These friendships show us a softer side of the founding fathers.

While today we use the term “platonic” to describe nonsexual friendships between men and women, in the late-18th and early-19th centuries, there was no special term for or even much recognition of, these relationships. The word “platonic” connoted an unrealized ideal and usually referred to romantic love not-yet consummated. Historians can, however, distinguish a friendship from a romance in the past through careful attention to the language men and women used. Of the many thousands of letters of the founders which have survived, small caches of correspondence with female friends survive. Their correspondence shows that the founding presidents were warm, loving and often lighthearted with their female friends.

Americans in this period were prolific letterwriters, writing lengthy missives to friends and family from whom they might be separate for years at a time. Trips up and down the Eastern seaboard would take weeks. A trip across the Atlantic to London or Paris, months. But friends of the opposite sex faced special challenges when writing one another, because unrelated men and women were not supposed to correspond. When they did write one another, they had to worry that their expressions of affection would be misinterpreted—especially since letters were often passed around as public documents. Think about it as if your whole family and a few of your neighbors had access to your email password.

As Benjamin Franklin told a female friend, “I know very well that the most innocent Expressions of warm Friendship, and even those of meer Civility and Complaisance, between Persons of different Sexes, are liable to be misinterpreted by suspicious Minds.” Given that, men and women were careful about the wording of their letters, particularly the openings and closings. While John Adams opened letters to Abigail with “My dearest friend” and signed off with lines like “yours most tenderly,” his letters to his friend Mercy Otis Warren look quite different. Most opened with “Madam” and closed more formally: “With the greatest Esteem and Respect, Madam, / I have the Honour to be, your Fr[i]e[n]d, & sert.”

The founding father who left the largest body of correspondence with female friends was Thomas Jefferson. Jefferson particularly enjoyed having female friends and had a unique ability to connect with women. His wife died in 1782, and soon after he moved to France. There, he befriended Alexander Hamilton’s sister-in-law Angelica Schuyler Church. Church was not in Paris long and Jefferson regretted that they were not able to be in the same place. In a 1788 letter, he told her “I never blame heaven so much as for having clogged the etherial spirit of friendship with a body which ties it to time & place. I am with you always in spirit: be you with me sometimes.”

While in France, Jefferson also first met Abigail Adams, in 1784. Abigail and Jefferson bonded as parents missing their children, lovers of art and culture and as sharp intellectuals. They went to plays, concerts and exhibitions together, and Jefferson spent much of his time at the Adams’ home.

By the time Abigail moved from Paris to London with John for his new appointment as American ambassador to Britain, she reported to her sister that Jefferson was “one of the choice ones of the earth.” He, in turn, jokingly referred to her as Venus; he wrote from Paris that while selecting Roman busts to send for the Adams’ London home, he passed over the figure of Venus because he “thought it out of taste to have two at table at the same time.”

Abigail’s husband John Adams, Jefferson’s eventual political rival during the Election of 1800, is known today for his loving letters to his wife, but he also corresponded eloquently with female friends. He and Abigail were both close with Mercy Otis Warren, a well-educated Massachussetts writer. John respected Mercy’s intelligence and insight on political affairs. He told her of a Bishop writing to a female friend that “I never attempt to write to you but my Pen conscious of its Inferiority falls out of my Hand.” Adams then remarked that “The polite Prelate did not write to that excellent Lady in so bold a figure with half the sincerity, that I could apply it to myself when writing to Mrs. Warren.” He closed the letter expressing “more Esteem than I have Power in words to expend.”

Adams’s predecessor, George Washington, likewise had talented female friends to whom he wrote in a more playful, loving style than we might expect from a leader often depicted as stiff and stoic. While in Philadelphia during the 1780s, he befriended two women from a circle of female intellectuals there, Annis Boudinot Stockton and Elizabeth Powel. Stockton was a New Jersey widow living near Trenton and held dinners for Revolutionary War officers in the early 1780s. She began writing and publishing poems in tribute to Washington before she met him, and in 1783 she wrote to apologize for doing so. He replied playfully, saying:

“You apply to me, my dear Madam, for absolution as tho' I was your Father Confessor; and as tho' you had committed a crime…You are the most offending Soul "alive" -(that is, if it is a crime to write elegant Poetry) yet if you will come & dine with me on Thursday, and go thro' the proper course of penitence which shall be prescribed, I will strive hard to assist you in expiating these poetical trespasses on this side of purgatory.”

This may sound stilted to modern ears, but essentially he’s offering her dinner with him as punishment for her poetic crimes. In the language of the late 18th-century, this is light-hearted jesting—especially for Washington.

Washington’s closest female friend, however, was Elizabeth Powel. Powel lived in a large home in the heart of the city, and Washington frequently spent time at her home while in Philadelphia for the Constitutional Convention in 1787. The poem he sent her for her 50th birthday in 1793 (written by another writer friend of Stockton and Powel) praised her (as Mira, the name of the brightest star in the constellation Cetus, the Whale):

Let her adorn your Mind

For Virtue in a pleasing Dress

Has Charms for all Mankind.

Washington remained friends with Powel for the rest of his life, even signing one letter to her a year before his death “I am always Yours.”

The affection and lightheartedness in these letters, however, coexists with serious discussions of politics. As John Adams told his friend Mercy Otis Warren in 1776, “the Ladies I think are the greatest Politicians.”   Thomas Jefferson, while often wary of women’s involvement in politics, trusted Abigail Adams to convey political news and often discussed current events with her. It was in response to her disparaging comments on Shays’ Rebellion, the 1786-7 armed uprising of Massachusetts farmers angry about taxation and other matters, that Jefferson famously wrote “I like a little rebellion now and then.” Men like Jefferson, Adams and Washington valued the political opinions of their female friends and sometimes even turned to these women for political access and influence.

Thomas Jefferson suggested to his friend Angelica Schuyler Church that if their friendship had been painted, it would be “something out of the common line.” What friendships between Jefferson and other founders and women show is indeed “something out of the common line”—it is a new story line for the founding era. It is impossible to continue to imagine a founding fraternity once we are aware of the many friendships with women that this generation of men had. The highest of the political elite were not the only ones to have such friendships, either. In fact, these friendships were fairly common among middling to upper class Americans at the time. All of these relationships, whether with political figures or not, offered a space for men and women to model the best virtues of the young nation, in particular modeling equality across the sexes. As such, we should not talk about founding brothers or founding fathers, but a founding generation made up of both men and women. 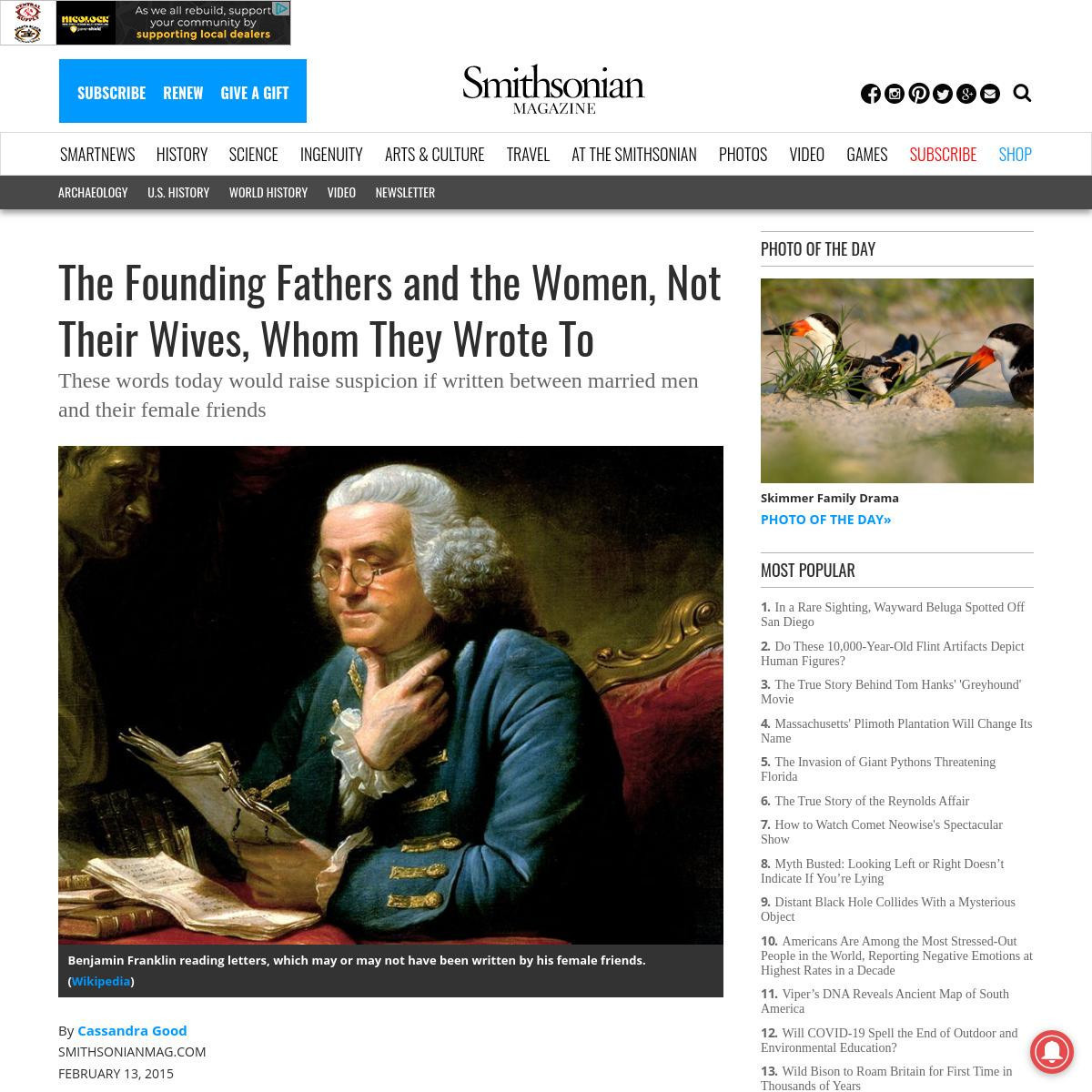 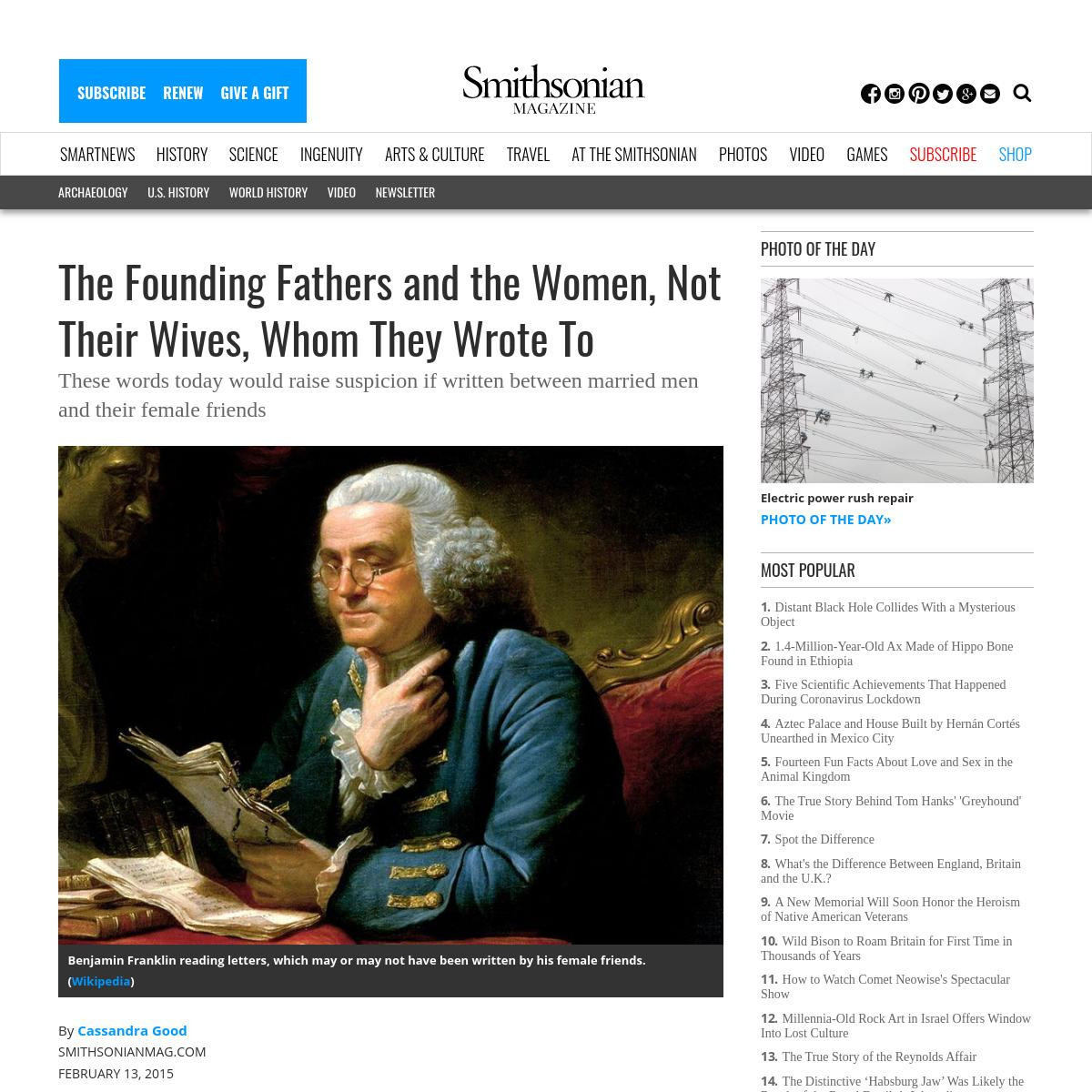