Change Author / Owner : Do We Doodle Because We Speak?

A toddler with a crayon in hand is understood to be a menace to white walls. But instead of scolding the kid, we could instead examine the scribbles for messages. Is doodling, often born of boredom, actually something that we are driven to do by instinct?

Some researchers are now discussing the possibility that doodling may be a kind of language. In an article by David Robson for BBC Future, Neil Cohn, who studies graphic novels scientifically at the University of California, San Diego, points out that some symbols are repeated across a medium — for instance, stars spin around the head of dizzy characters in comics — and serve as a kind of vocabulary.

A toddler’s desire to scribble on anything and everything may actually be evidence of a fundamental need for a doodle language.

There are also some signs that these drawings are rudimentary attempts at communication – the size of the random squiggles seems to correspond to the size of nearby objects, for instance. In light of Cohn’s work, this instinct could just be the graphical equivalent of “babbling” – the cooing noises that all babies make as they make the first steps towards speech. Perhaps we are just hard-wired to communicate in as many ways as possible and our environment determines which path becomes more dominant.

Robson’s piece also delves into the storytelling by the Arandic, the Waripiri and other indigenous cultures in Australia. There, stories are told with visual aids sketched in the desert ground. “In the old days, the women would take a stick from a tree and shape it into a flexible implement for drawing,” Lizzie Ellis, a Western Desert storyteller, told the BBC. “But the girls now use wire, made with elaborate handles.” The girls wear these 'story wires' around their neck so they can quickly draw at any time

Other facts also help elevate the humble doodle. Of course, artists doodle regularly (though we call it sketching). Early written languages look like they borrow heavily from and improve upon sketches of people and things. And doodling may even improve our ability to retain information. So next time your pen wanders to the margin of your page, know that you are engaging in a practice that is rich in history and just maybe hardwired in your brain. 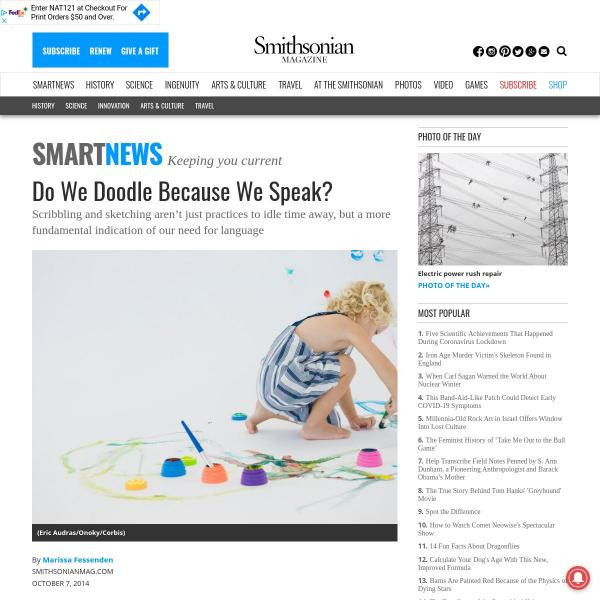