Life aboard the International Space Station may soon be decidedly more enjoyable. Astronauts are about to harvest their first small crop of lettuce, and an Italian-made espresso machine is scheduled for delivery in November.  And if all goes according to plan, the space station may even get a lot less cramped by next summer thanks to an add-on module built by Bigelow Aerospace.

The addition won’t look like the rest of the station, though: It’s a (highly sophisticated) inflatable module with a flexible shell.

The Bigelow Expandable Activity Module (BEAM) will be the first non-rigid, expandable space module to house human occupants. BEAM is scheduled to arrive, deflated and compact, aboard the eighth SpaceX ISS cargo resupply mission in 2015. Once affixed to the ISS by the robotic Canadaarm2, BEAM will inflate to a 13-by-11-foot room, and astronauts will begin a planned two-year, NASA-backed test. In particular, NASA is interested in how the structure stands up to things like hits from micro meteors and radiation compared to more traditional rigid, primarily metal structures, like the ISS itself.

Without a rigid frame, fragility and air leaks are, of course, a concern. But the shell of BEAM is built less like a balloon and more like a thick tire wrapped in a Kevlar-like vest. Michael Gold, the director of D.C. operations and business growth at Bigelow Aerospace, says BEAM’s flexible nature is part of the reason it could offer big advantages.

Unlike rigid structures like the ISS, BEAM is better suited to serve many of NASA’s next-generation needs: It can be tailored to specialized activities or missions—say, as exercise space, or a place for astronatus to conduct experiments—and can be connected together to form even larger structures. More internal volume also means more room for supplies.

Perhaps the most important benefit of BEAM and Bigelow Aerospace’s other designs, though, is that that their launch footprint is fairly small and light at just 3,000 pounds, which makes it much less costly to launch than similarly sized rigid structures.

By comparison, the total weight of the ISS is 925,000 pounds--or it would be, if it was sitting on earth, rather than in orbit.

“Not only will we protect you against asteroids and radiation,” Gold says, “but [also] from a much greater threat, which are budget cuts. Our technology can be implemented for a fraction of the cost of traditional systems.”

As NASA and international space agencies strive to move astronauts toward Mars and beyond, while facing budget battles back on Earth, figuring out how to do more with less is one of the most needed innovations in modern space exploration.

The company has tested BEAM’s concepts in orbit already, with earlier (and somewhat smaller) Genesis I and Genesis II crafts, which were launched and tested in 2006 and 2007 aboard converted Soviet-era nuclear rockets.

This new round of BEAM testing will be the first with human astronauts inside, however. NASA is currently testing the BEAM module on the ground, both with Bigelow and with independent materials testers, to understand how its materials stretch and retain shape over time, as well as exactly how the structures fail when pushed past their limits.

The idea of using non-rigid materials for structures in space has been around for decades. NASA has designed and tested the concept on the ground, but the BEAM module will be the first non-metalic, flexible structure to be tested in space by astronauts. Human testingis finally happening now, because NASA is looking at ways to get people to Mars and other far-off destinations, which will require larger spacecraft and a larger crew capacity.

Jason Crusan, director of advanced exploration systems at NASA, says once the BEAM module is installed on the ISS next summer, measuring how module leaks will be one of the primary concerns.

“Everything leaks at some point, even our solid, rigid structures,” Crusan says. “There are points and seals and such, and understanding how those may or may not leak over time and [with BEAM] will be really important for us.”

Crusan also says the inside of BEAM will be fitted with sensors for temperature, micro-meteor impacts, and radiation, which should help NASA better understand in what ways non-rigid spacecraft are more, or less, dangerous to astronauts over long periods of time.

How the soft-shelled module reacts to radiation is also a concern for NASA. But this might be another area in which using a non-rigid, mostly non-metal structure offers a substantial benefit.

“When [metallic structures are] hit by a radiation particle, the one particle gets split into many,” Crusan says. “Soft-good structures [like BEAM] don’t have metallics in them, so your one particle stays one high-energy particle and passes right through."

In theory, then, BEAM’s small, inflatable structure should mean fewer, more concentrated radiation strikes passing through the module, rather than a spray of many more less-powerful, though still potentially damaging particles like those that astronauts are subjected to on ISS and other metal-shelled spacecraft.

The BEAM module and its successors (the company is also working on more advanced, larger structures, like the 330-cubic-meter BA 330) may be critical to NASA’s future plans as humans venture further into space.

NASA is far along in development of a next-generation launch vehicle, the Space Launch System or SLS, as well as a new capsule, Orion. Both are expected to make their first launch in 2017 and, like the BEAM, should help make greater strides in space.

“The next component that we need in orbit is something that extends Orion’s duration beyond its less-than-30 day duration and four-person crew to longer and longer periods of time,” says Crusan, “and that will be some kind of limited habitat.”

If the tests go as planned, the flexible, modular, low-cost nature of BEAM and other future modules like it could could form the limited habitats astronauts will need on the long trip to Mars, and beyond. 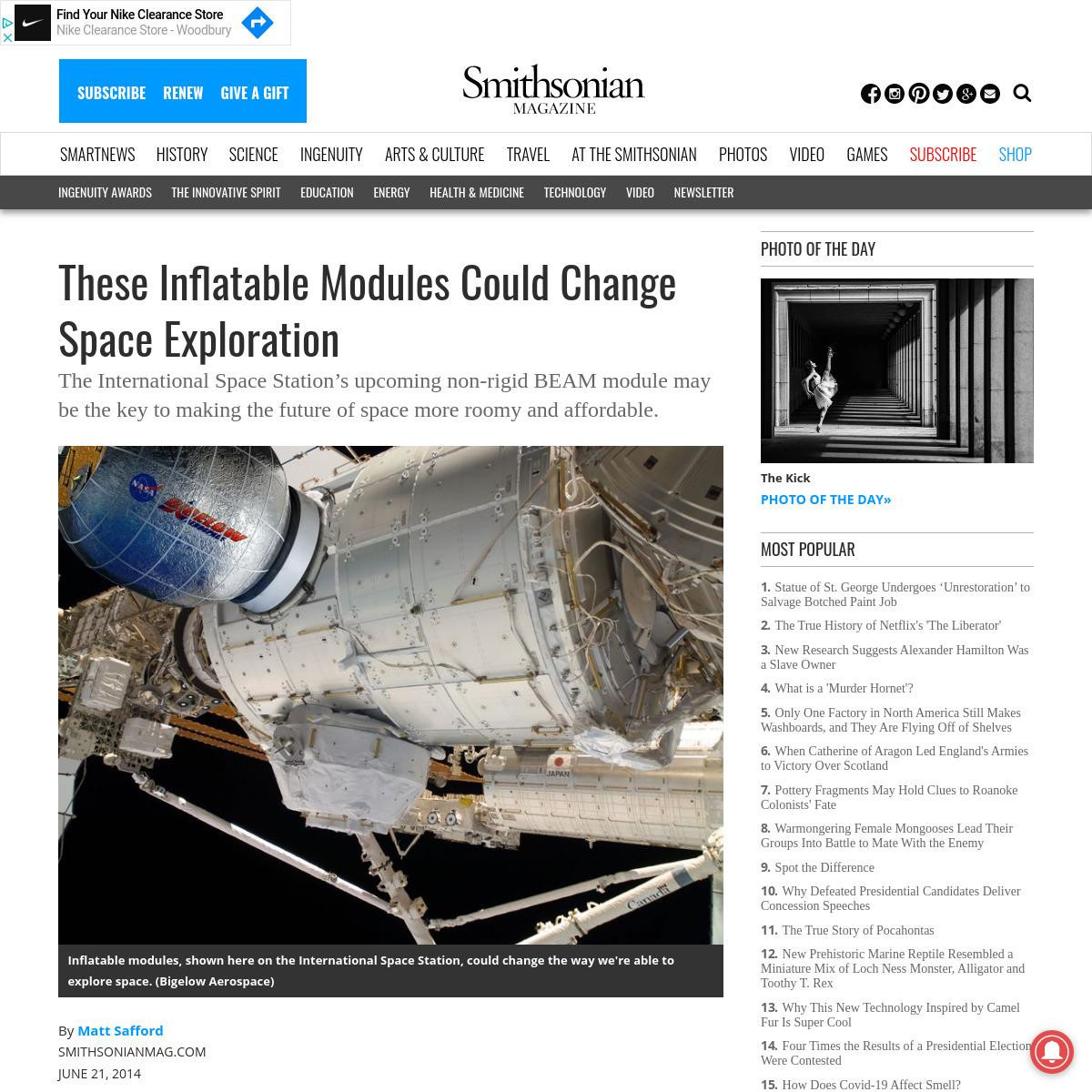