Change Author / Owner : Will Brazil’s World Cup Stadium in the Middle of the Amazon Pay Off?

In a competition for most improbable place to host the World Cup, the city of Manaus would surely make the finals. Its Arena da Amazônia sits in the middle of the Amazon Rainforest, 900 miles up the Amazon River in Brazil’s isolated Amazonas state bordering Venezuela, Colombia, and Peru. “The Amazon Arena”  will host four matches next month– including one featuring the English team, whose coach got into a spat with the mayor of Manaus after complaining about the prospect of having to play “in the middle of the Amazonian jungle.” So perhaps more than any other of Brazil’s 12 World Cup host cities, Manaus faces a Sisyphean task during next month’s influx of futebol superstars and their rabid fans: prove that it was worthwhile to build a $300 million, 42,000-seat stadium in an isolated port city lacking a serious futebol culture, or experience hosting major events.

"I didn’t have any idea how difficult this would be,” said Eraldo Boechat Leal, executive coordinator of the Unidade Gestora do Projeto Copa (“UGP Copa”), the project management unit overseeing all World Cup preparations for the state of Amazonas. "It was a huge, huge, huge challenge."

Leal and I had lunch recently at a restaurant on the banks of the Rio Negro, an Amazon tributary that had supplied our spread of baked tambaqui fish and bolinhos de bacalhão (fried codfish). Outside the windows, an afternoon monsoon obscured the view onto an inlet littered with refuse, filled with fishing boats, and surrounded by colorful pink and orange shanty homes. The previous evening, Arena da Amazônia had hosted the top-flight Brazilian team Santos, giving Leal and his team a final chance to iron out the wrinkles before Manaus hands the stadium keys to FIFA at the end of May.

But “wrinkles” may be an understatement, considering that Arena da Amazônia saw three construction-related deaths—out of the eight total deaths that have occurred during Brazil’s $11 billion World Cup preparations. This is four times as many deaths as South Africa experienced during its preparations for the 2010 World Cup. Leal, however, was nonplussed. “We had almost four years of building and construction from the bottom until the stadium was ready,” he said. “We’re saying close to 1,500 days, with workers every day. At least eight hours a day and, in some months, three shifts of eight hours. Imagine how many events happened without accident.”

Image by Reuters/Corbis. Workers rest at the entrance to the Amazon Arena three days before its scheduled inauguration. (original image)

Image by Reuters/Corbis. Workers look out over the Arena Amazonia soccer stadium three days before its scheduled inauguration. (original image)

Image by Reuters/Corbis. An aerial view of the Arena Amazonia soccer stadium two days before its scheduled inauguration. (original image)

Image by BRAZIL/Reuters/Corbis. Players from the Nacional of Amazonas soccer club warm up in the Arena Amazonia stadium before the its inaugural match between the Nacional and Remo clubs in Manaus. (original image)

Image by © BRAZIL/Reuters/Corbis. An overview of the stadium on the day it was inaugurated in Manaus. (original image)

Not that all the work is done. Manaus is still rushing to complete sidewalks and roads outside the arena, while other stadiums such as the Arena de São Paulo are yet to be completed. I wanted to see these last-minute preparations first hand, and so I arrived to Manaus in late April to live here for three months while reporting on the tournament and more generally about the dynamics between environment and industry for The Christian Science Monitor, where I am a correspondent and an editor. I’d lived in Rio before, but never been to Manaus before, which people in Rio consider a continent away.

I was at the May 8 test-run match between São Paulo state’s Santos (the most-winning team in Brazilian history) and Amazonas state’s Princesa do Solimões (whose team highlight is having once been good enough to compete in the Serie B division, which is a full division below the Serie A). And, admittedly, I was also one of many people posing for photos outside and inside the beautiful white stadium, designed to resemble a traditional indigenous straw basket.

The stadium stands in juxtaposition to most everything else about this unruly and unplanned city, constantly clogged with cars and buses because of the absence of ring roads or bypasses. Many people in Manaus work jobs related to the free trade zone created in 1967 under the military government as a geopolitical strategy to populate and guard this porous border region. Since then Manaus has become the nation’s fastest-growing city, with a population of 2 million, and third-largest industrial hub, a base for 550 major companies from Samsung to Honda assembling pieces of TVs and motorbikes that are shipped in from around the world and then shipped 900 miles back downriver to the Atlantic Coast for distribution to Brazil’s more populous southern states.

The future of the city is inextricably tied to the future of the free trade zone, which the Brazilian Congress is currently debating whether to extend by 50 years to 2073. Arena da Amazônia is a symbol that Manaus is here to stay, regardless. Some 20,000 people had quickly snatched up tickets for the sold-out May 8 match (only half the arena was opened) and there was a palpable excitement that the famed Santos – the team forever associated with Pelé – had deigned to fly 1,700 miles to the Amazon. Even the police on guard couldn’t take their eyes off the field, stepping forward to the guardrail whenever Princesa managed to mount an attack against the visiting Goliath.

During the second half, I made my way up to the security control room, escorted by two members of the military police. There, in an extra-large luxury box high above the field, I met Igor Menezes Cordovil—who will oversee all city security during the World Cup (FIFA itself is in charge of security inside all stadiums). The white-walled room was filled with desks and computers and security monitors with feeds from 107 cameras inside the stadium and 50 cameras around the perimeter.

“Intelligence services saw you,” Menezes told me. “They asked me who you were.”

For this trial run, Menezes had deployed a veritable army of 3,500 security personnel that included police from the civil, mounted, military, federal, and special forces; a traffic unit; a bomb squad; gate stewards checking tickets and enforcing rules; and volunteers. The security room was connected in real time to the city’s command center a couple of miles away. Menezes claimed that in the event of an incident, it would take less than 8 minutes to evacuate all 42,000 spectators — though it took me 10 minutes just to walk up the long concrete ramps into the stadium, let alone reach the nose-bleed section.

So far, instead of security problems, Manaus officials have encountered cultural hurdles that would be unfamiliar to other World Cup host cities. Because Manaus doesn’t have a team of its own or a tradition of hosting big matches, Manaus fans didn’t know to arrive early to a match, which meant many were rushing into the stadium at the last minute, causing confusion over seating. Amazonian weather is another challenge. The high humidity and heat—averaging 93 percent humidity and 81 degrees in June—are more than a concern for players and coaches: the tropical weather repeatedly delayed stadium construction and caused Manaus to miss FIFA’s end-of-2013 deadline for finishing the stadium.

It rains so much in Manaus that even as the rest of Brazil is experiencing its worst drought in decades, the stadium here is recycling rainwater for both the field irrigation and sanitation systems. Recently, heavy rains caused a partial ceiling collapse at the newly upgraded international airport, according to local reports.

The bigger challenge for Manaus, according to Leal, still lies ahead, in ensuring that the World Cup leaves behind a positive legacy and that the arena does not become the white elephant that critics have predicted. “We designed the World Cup in Manaus to provide a legacy to our people,” Leal said. “All the things we’re doing, every detail is connected to people.” That means using the event to attract investment and speed up construction of other planned city projects, such as a new water treatment system. It means reframing the World Cup not as a “cost,” but as an “investment.”

Brazil already faced an uphill slog in recouping its investment. As Americas Quarterly detailed in an article three years ago, the World Cup normally only generates $3.5 billion in revenue (most going to FIFA), but Brazil would incur costs more than three times greater. The physical legacy of the World Cup, therefore, would need to yield a future stream of financial benefits for Brazil to recoup costs.

“I think it will be a waste of money,” Eryco Gomez, a 20-year-old biology student here in Manaus, told me in one of many conversations I’ve had with disgruntled Brazilians. “We don’t have good teams in Manaus, so why do we need a good stadium? After the World Cup, this stadium will be nothing.”

Many Brazilians have come out against hosting the World Cup because of the soaring costs and pervasive corruption. Massive nationwide protests erupted a year ago during the Confederations Cup, with fans booing President Dilma Rousseff during an opening event and later marching to the chant "Não vai ter Copa!" (“There won’t be a Cup”). Leal and Menezes told me that such protests in Manaus have been minimal and nonviolent.

“It’s going to be a strong emotion to see the World Cup open in Manaus,” Leal said. “I believe I will not hold back tears.”

I imagine the same for many people looking upon the future shell of the Arena da Amazônia, memories fading of the highly anticipated face-offs here between England’s Wayne Rooney and Italy’s Mario Balotelli, Portugal’s Cristiano Ronaldo and USA’s Clint Dempsey. It is hard not to draw parallels to the grand opening in 1896 of the city’s Teatro Amazonas, a world-class opera house built with riches from the rubber boom to lure the great Italian tenor Enrico Caruso into the Amazon. The city’s downward spiral soon began as Asia began producing rubber more efficiently, and the opera house was shuttered from 1924 until 1997.

Today, no one seems to remember if Caruso ever actually came.

Stephen Kurczy is a Latin America correspondent for 'The Christian Science Monitor'. He wrote this for Zocalo Public Square. 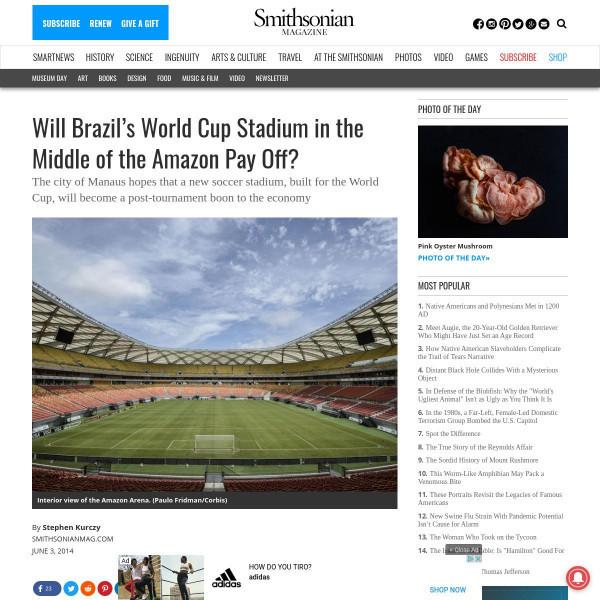