Change Author / Owner : This Halloween, Spend a Ghoulish Night (or Day) at the Smithsonian

From stiletto daggers and sexy witches to devilish hydras and sea serpents, there's no end of scary stuff to spook yourself and your date silly here at the Smithsonian. Costumes are encouraged and if you don't feel safe going out on Halloween, stay home and make a virtual appearance.

1.     “Halloween Changes Its Disguise: Has the Witching Season Grown Up?”
Just do a quick search of female Halloween costumes and you’ll be bombarded with outfits like “sexy policewoman,” “sexy nurse,” or even “sexy lobster.” This trend of “sexy” is nothing new. In fact, in the early 20th century, Halloween postcards featuring sexy witches were quite popular among the ladies. Daniel Gifford, author of American Holiday Postcards, 1905-1915: Imagery and Context will speak about these Halloween postcards and how the holiday has changed (or not changed) over the course of time. The event is Oct. 27 at 6:45 pm at the S. Dillon Ripley Center. Tickets are $25.

The myth of the half-fish, half-woman creature has existed for centuries, but it didn’t materialize from nowhere. In fact, early explorers like Christopher Columbus claimed to see mermaids, but what they actually saw were manatees. The Biodiversity Heritage Library is doing an online social media campaign called “Monsters Are Real” to explore stories, books and animals that inspired monsters such as the mermaids, Kraken, Leviathans, Hydra and sea serpents. Follow @BioDivLibrary on Twitter and their Facebook page for updates on their six blog posts from Oct. 27-31. You can also explore their Flickr collection of historic monsters and enjoy animated GIFS on the Smithsonian Libraries Tumblr.

Start your Halloween festivities early in the evening at Fear at the Freer! Learn about the spooky objects in their collection like Emperor Jahangir's meteorite dagger, create a scary mask and eat from the Tokyo in the City food truck. Stay for the screening of “Ringu,” the Japanese horror movie that inspired the making of “The Ring.” The event is Oct. 31 at 5 pm. Free. Costumes are encouraged.

In celebration of Halloween, Smithsonian Gardens is kicking off #SpookyPlantsWeek filled with odd, creepy-looking plants, such as the parasitic Himalayan Balanaphora, a tongue-twister of plant that masquerades as a toadstool. The Tacca chantrieri, better known as the bat flower, has black flowers and long whiskers and can be seen at the Ripley Center kiosk entrance. Look out for doll’s eyes if you find yourself at the Bird Garden in Natural History this week, it’s hard to miss those eyes following you around the garden. From Oct. 27 through Oct. 31, Smithsonian Gardens will post a new plant on Facebook, some of which you can view online and others that you may find in the gardens. You can also follow their Twitter @SIGardens for updates.

The acclaimed American author, Sandra Cisneros, created an installation, “A Room of Her Own: My Mother’s Altar” as part of the “American Stories” exhibition at the American History Museum. The installation is in the tradition of “Dia de Muertos” and honors her mother who never had a room to herself until the last 10 years of her life.  The installation runs from Oct. 31 to January 12, 2015. Free.

Practiced primarily in Mexico, El Día de Los Muertos, or the Day of the Dead, traces its origins to both Spanish and indigenous influences. (National Museum of the American Indian)

And calling all New Yorkers, continue the spirit of Halloween and make your way to Smithsonian’s Day of the Dead Celebration at the American Indian Museum Heye Center at One Bowling Green across from Battery Park. The Aztecs believed after someone passed away on Earth, they spent four years journeying through nine levels before reaching Mictlan, the resting place of the departed. At the museum's Washington, D.C., location, you can explore these levels through music, dance, food and activities Nov. 1-2 from 10:30-5 pm. The museum's New York City event will run Saturday Nov. 1 from noon to 5 pm. Free.

In Mexico, El Día de Los Muertos, or the Day of the Dead, traces its origins to both Spanish and indigenous influences. (National Museum of the American Indian)

7. Virtual Celebrations of Day of the Dead

If you aren’t able to attend the festival in NYC, join in on the celebrations via the Smithsonian Latino Virtual Museum. From Oct. 27-Nov.2, enjoy events such as a live webcast via the Latino Centers UStream channel featuring the behind the scenes altar installation by artist Sandra Cisneros. You can also look forward to a 3D experience in Second Life, an avatar based virtual world and even build you own virtual altars. The interactive commemoration hosted by the Smithsonian Latino Center in collaboration with the University of Texas at El Paso allows people all over the world to participate in this rich, informative celebration. 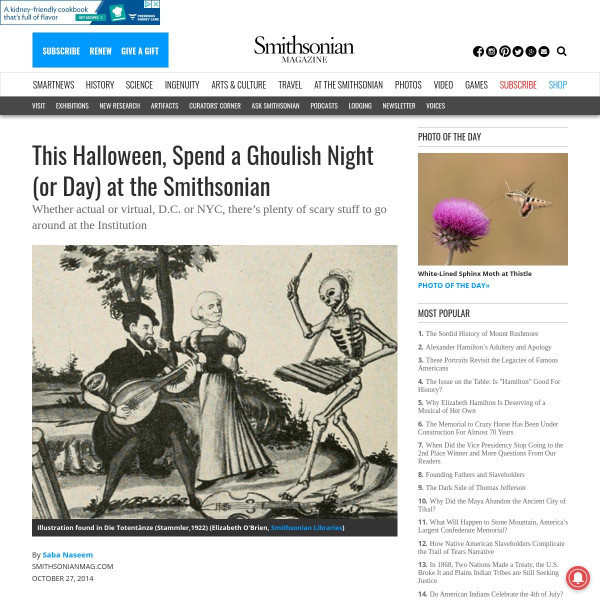