A fine hotel lobby always has that mysterious cinematic charm, cast in the theatrical glow of ornate lighting, high ceilings and opulent furnishings. Washington, D.C.'s Sofitel Hotel on 15th Street promotes its luxurious accommodations with no adjective spared—incomparable, presidential, chic, elegant, superb. And indeed, wandering in under the watchful and discerning eye of the concierge, the average visitor naturally assumes the air of propriety before stepping up to the bar to order a martini, shaken but not stirred.

We are not in a museum here, but the works on the walls at the Sofitel have been curated by none other than Olivier Widmaier Picasso, the great artist's grandson and author of the book Picasso: Portrait In Time, in an exhibition entitled, "Revealed." The show opened last week and will remain on view through October 31 before traveling on to Chicago, Montreal and Los Angeles. The 30 photographs were selected by Picasso from the archives of the French weekly magazine Paris Match and offer a unique and rare opportunity to see some of the last century's most revered and most talked about artists at work in their studios or at their easel. The magazine's photographers have somehow captured some of the most intimate moments of these artists engaging with their muse.

"An artist's studio is a reflection of his soul," writes Olivier Widmaier Picasso in the show's accompanying booklet. "A sacred, secret place where his talent is expressed and genius revealed. This is where a painter keeps not only his tubes, brushes and canvases, but also his thoughts, memories, doubts, worries and certainties."

The works include Salvadore Dalí painting a rhino at a French Zoo, René Magritte donning his characteristic black bowler, Pablo Picasso with three of his many lovers, models and wives, and Henri Matisse just months before his death painting the walls of his room from his bed.

At a recent gathering, Susan Behrends Frank, a curator from DC's Phillips Collection was on hand, admiring the images. The show, she says, "emphasizes the hand of the artist and the mind of the artist." And like everyone in the crowd, Frank was enjoying the behind-the-scenes peek into the artists' lives. "Picasso needed everything around him. His studio is filled with his work. It is all around him. On the floor even. But Joan Miró's studio is nearly empty, elegant, sparse—his brushes meticulously lined up," pointing to Tony Saulnier's 1962 image. All of the artist's brushes on the elegant were neatly aligned with his colored-filled cups.

"I'm looking at this ensemble of images as a curator familiar with the works of these artists, so many of them are held in the Phillips' permanent collections," she added, before marvelling at the unique collaboration that the Paris Match photographers employed. "It's a dynamic conversation between the photographer and the artist." Here is Salvador Dalí at the Vincennes Zoo near Paris in 1955 painting a rhinocerous who is gazing longingly at a full-size reproduction of Vermeer's La Dentelliére. "Dalí is so dramatic."

"Revealed" is on view at the Sofitel Hotel in Washington, D.C., at Lafayette Square through October 31 and will travel to the Sofitel Hotels in Chicago (November 2014 to January 2015), Montreal (February to March 2015) and Beverly Hills (April to June 2015). 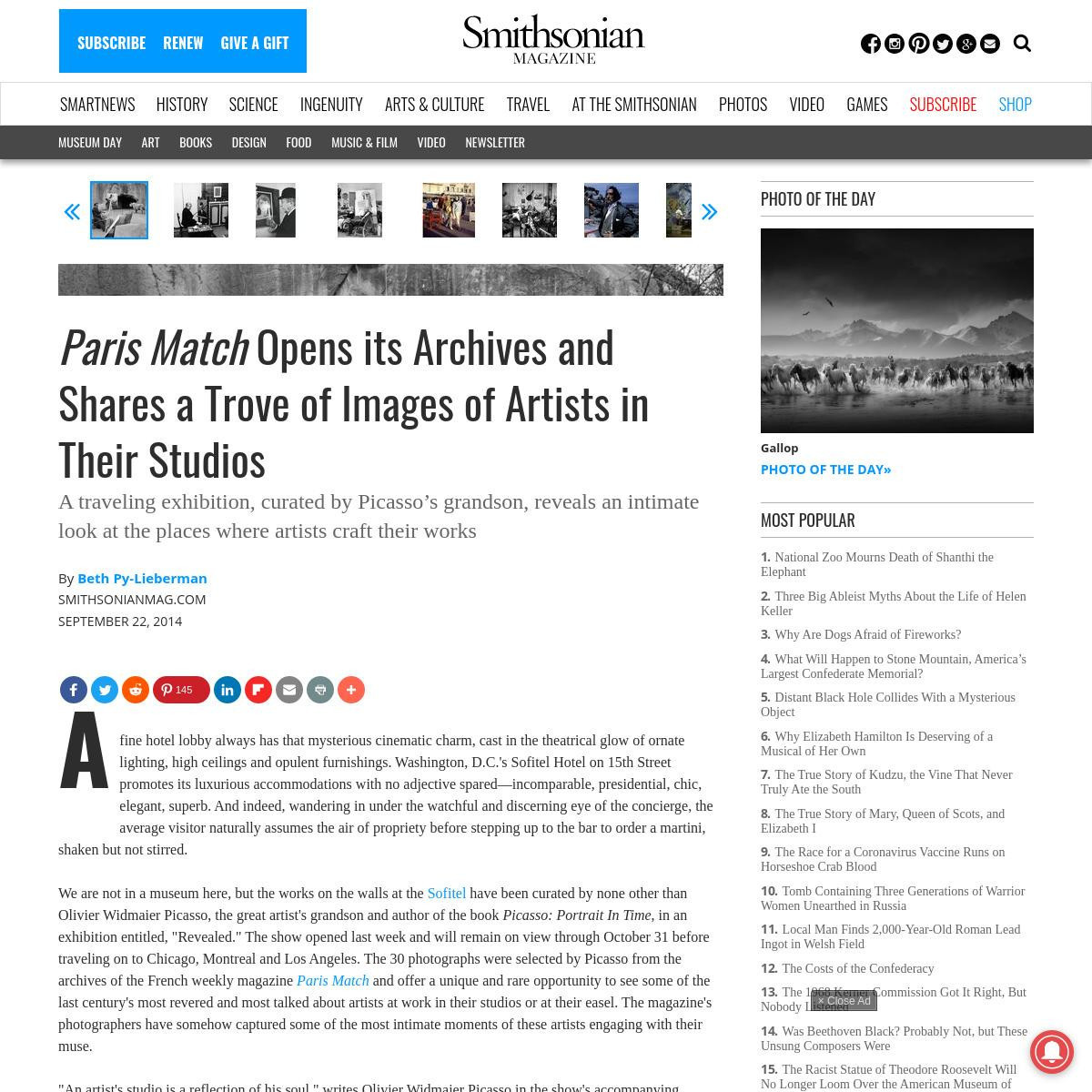