Doctor Who may be the world’s longest-running science fiction television series, but it’s not the oldest sci-fi program to have been broadcast on television. That honor goes to another BBC production, which first aired 78 years ago today: a live recording of Karel Čapek’s seminal play, R.U.R. (Rossum’s Universal Robots).

Written by Čapek in 1920, R.U.R. is a cornerstone not just for science fiction, but also real-life technological advancements – famously, Čapek coined the Czech word “robota” to mean an artificially created person, which was later translated into English as “robot.” On the surface, however, Rossum’s robots have very little to do with the various machines that use the term today.

As Noah Berlatsky writes for the Atlantic:

[R.U.R.] imagined its artificial servants not as metal men of nuts and bolts, but as biological products, much like clones. Domin, the robot-factory manager in the play, cheerfully gives a tour pointing out "the spinning mill for nerves. The spinning mill for veins. The spinning mill where miles and miles of digestive tract are made at once." These first robots were fleshy, goopy beings that grew like biological critters. In the play, robots are basically human bodies borne of mechanical production and process.

Rossum’s robots may be biological in nature, but they set the blueprint for all of science fiction’s robot uprisings, from The Terminator to The Matrix. At first, most of the human characters in R.U.R. see the robots as little more than appliances made in human shape, but as the robots become fed up with their place in society, they rebel. Eventually, they drive humanity toward extinction only to learn that they themselves cannot reproduce without the aid of their former masters.

While the play has fallen into relative obscurity over the decades, it was controversial when it first premiered. The New York Times panned the play when it started its run in the United States, but it curried favor with writers and poets who found power in Čapek's allegory of politics, power and technology, Erin Blakemore writes for Mental Floss.

“In its various windings, R.U.R. is significant, important, teasing, quizzical, funny, terrible, paradoxical," poet and writer Carl Sandburg writes in a letter to the editor for the New York Times, defending the play.

Just two years after the BBC Television Service launched, R.U.R. was adapted into the 35-minute-long production that aired on February 11, 1938 at 3:20 p.m. It’s unclear whether any recordings survived the decades, but it’s worth noting that the play's special effects made it a natural fit for the television format. A week before BBC first aired the program, the Radio Times advertised R.U.R. as “a play that should lend itself very well indeed to television from the point of view of effects.” Granted, the effects were probably rudimentary and the production may have used more than its fair share of tin foil, but a marketing first is still a first.

R.U.R. might have peaked in popularity in the 1920s and '30s, but it remains the bedrock that much of modern science fiction draws on. To this day, the play is occassionally adapted and revived, and its themes run through many television shows and movies now in production. Whether it is Doctor Who, The Terminator or The Matrix, each of these science fiction franchises has a piece of Rossum's Universal Robots at its core. 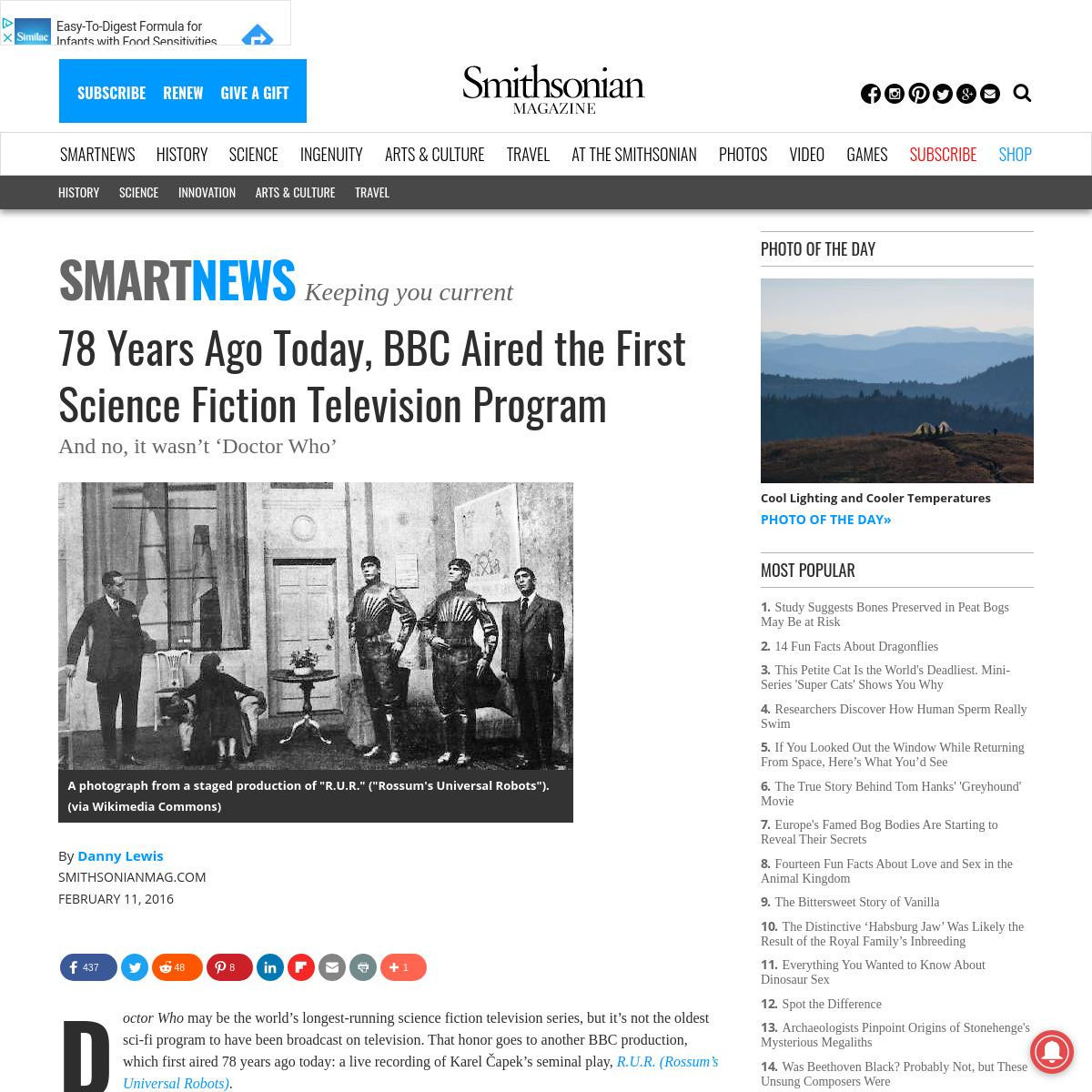