Change Author / Owner : You Can Help Try to Track Down D.B. Cooper’s True Identity by Digging Through FBI Files

On November 24, 1971, a man bought a one-way plane ticket from Portland, Oregon, to Seattle, Washington, and set off a decades-long mystery. During the trip, the man told the flight attendants that he was carrying a bomb and managed to successfully hold the airplane ransom before jumping out on the wooded outskirts of Seattle with four parachutes and $200,000 in cash strapped to his body.

The hunt for this mysterious skyjacker sparked a a major manhunt. At first, the only clue that investigators from the FBI had to go on was the name the man gave at the ticket booth—“Dan Cooper,” which was later misreported by the press as “D.B. Cooper.” However, after decades of frustration, in July, the federal agency finally gave up and closed the case.

"If it [a new lead] comes in, we've got to follow up with it," FBI Special Agent Curtis Eng, who had been on the case since 2010, told CNN's Farida Fawzy.  "It takes time and resources away from my other cases, where there are victims now. Where there's problems and crimes now."

But for journalist Geoff Gray, the search hasn’t stopped.

“He’s a cultural hero, a figure that has been sort of immortalized as a gentleman thief, this sort of swashbuckling sky pirate who was able to commit the ‘perfect crime,’ hurting nobody, at least physically, and getting away with it,” Gray tells Smithsonian.com.

Gray first got bit by the “Cooper Curse,” as he calls it, when he was working for New York magazine as an investigative reporter in 2007. Since then, Gray has become something of an expert on Cooper. He began looking into Cooper’s story and eventually found his way to the FBI’s archives, where he uncovered a trove of case files that had never been publically released. These documents included all sorts of details that Gray believes could help shed light on the man behind the myth—including photographs and interviews with the plane’s passengers and crew in the immediate aftermath of the incident.

“For instance, according to a passenger, Robert Gregory, he says Cooper had wavy, Marcelled hair,” Gray says. “And then the wavy hair is seconded by a stewardess. No sketch of Cooper has him with wavy hair—he has flat, kind of mousy hair. This guy Gregory, we know, was never interviewed [for] the FBI artist sketch...potentially decades of investigative time were spent not knowing that clue.”

Even though the FBI has given up on the case for now, Gray believes the files could still hold clues to Cooper’s true identity—and he’s looking for help. On the 45th anniversary of D.B. Cooper’s heist this November, Gray launched “The D.B. Cooper Project” through the web magazine True.Ink. By enlisting everyday investigators to the crowdsourced project, Gray hopes that getting thousands of new eyes on the material will dredge up new clues and insights that could help finally track Cooper down. But considering that the case has gone decades without being solved, Gray is aware that finding definitive proof of Cooper’s identity is tricky, to say the least.

“To me the most fascinating part is not really who was Cooper, but why are we so fascinated with this guy?” Gray says. “Why does he still after 45 years capture the public’s interest?”

So far, Gray has released one batch of interviews and other documents, with more to come on the night of the hijacking and the subsequent manhunt over the next few months. Regardless of whether or not Cooper’s identity is ever discovered, these documents provide a unique look at a modern mystery. 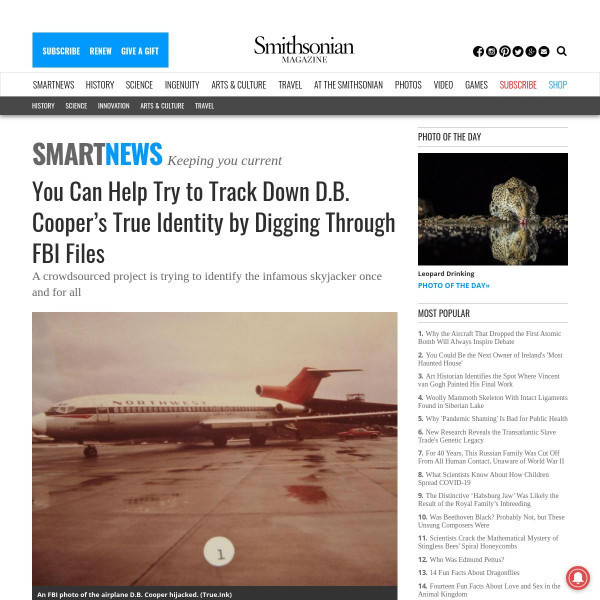