Change Author / Owner : Yawning Spreads Like a Plague in Wolves

Chimps do it, birds do it, even you and I do it. Once you see someone yawn, you are compelled to do the same. Now it seems that wolves can be added to the list of animals known to spread yawns like a contagion.

Among humans, even thinking about yawning can trigger the reflex, leading some to suspect that catching a yawn is linked to our ability to empathize with other humans. For instance, contagious yawning activates the same parts of the brain that govern empathy and social know-how. And some studies have shown that humans with more fine-tuned social skills are more likely to catch a yawn.

Similarly, chimpanzees, baboons and bonobos often yawn when they see other members of their species yawning. Chimps (Pan troglodytes) can catch yawns from humans, even virtual ones, as seen in the video below. At least in primates, contagious yawning seems to require an emotional connection and may function as a demonstration of empathy. Beyond primates, though, the trends are less clear-cut. One study found evidence of contagious yawning in birds but didn’t connect it to empathy. A 2008 study showed that dogs (Canis lupus familiaris) could catch yawns from humans, and another showed that dogs were more likely to catch the yawn of a familiar human rather than a stranger. But efforts to see if dogs catch yawns from each other and to replicate the results with humans have so far had no luck.

Now a study published today in PLOS ONE reports the first evidence of contagious yawning in wolves (Canis lupus lupus). “We showed that the wolves were able to yawn contagiously, and this is affected by the emotional bond between individuals, which suggests that familiarity and social bonds matter in these animals the same way as it does in humans,” says study co-author Teresa Romero, who studies animal behavior at the University of Tokyo.

The prevalence of contagious yawning in primates and other mammals could give us some clues to the evolution of empathy—that’s in part what makes the phenomenon so interesting and so controversial. If dogs can catch yawns from humans, did they pick up the behavior because of domestication, or does the trait run deeper into evolutionary history?

The Tokyo team took a stab at those questions by looking at contagious yawning in dog’s closest relatives, wolves. For 254 hours over five months, they observed twelve wolves (six males and six females) at the Tama Zoological Park in Tokyo. They kept tabs on the who, what, when, where, how many and how long of every yawn, then separated out data for yawns in relaxed settings, to minimize the influence of external stimuli.

Next, they statistically analyzed the data and looked for trends. They found that wolves were much more likely to yawn in response to another’s yawn rather than not, which suggests that contagious yawning is at play.

In image A, an individual (right) yawned during a resting period, and a few seconds later, image B shows the subject (on the left) yawned contagiously. (Teresa Romero)

Wolves were more likely to catch the yawn if they were friends with the yawner. Females were also quicker on the yawn uptake when watching the yawns of those around them—possibly because they’re more attuned to social cues, but with such a small group it’s hard to say for sure.

The results seem to add to the case for empathy as the primary function of contagious yawning. “We have the strongest responses to our family, then our friends, then acquaintances, and so on and so forth,” says Matt Campbell, a psychologist at California State University, Channel Islands. “That contagious yawning works along the same social dimension supports the idea that the mechanism that allows us to copy the smiles, frowns and fear of others also allows us to copy their yawns.”

Empathy likely originated as an ancestral trait in mammals, and that’s why it emerges in such disparate species as wolves and humans. “More and more research is supporting this idea that basic forms of empathy are very ancient, and they are present in a wide number of species, at least in mammals,” says Romero. Elephants, for example, comfort their upset friends. Even rats exhibit a basic helping behavior toward other friendly rodents.

Why does contagious yawning between members of the same species show up in wolves and not dogs? The difference probably comes down to study design, not biology. "Most likely, dogs also catch yawns from [other dogs], as now shown for wolves," says Elaine Madsen, a cognitive zoologist at Lund University in Sweden. Further studies might reveal the extent to which human interaction has affected present-day dogs' susceptibility to catching another species' yawns, she says.

It’s impossible to say what true function contagious yawning serves in wolves, but the researchers argue that such behavior could cultivate social bonds. “If an individual is not in sync with its group, it risks being left behind. That is not good,” says Campbell. Just watching wolves yawn can’t definitively prove that empathy drove the behavior, but it's certainly compelling evidence that wolves might feel for their fellow lupines. 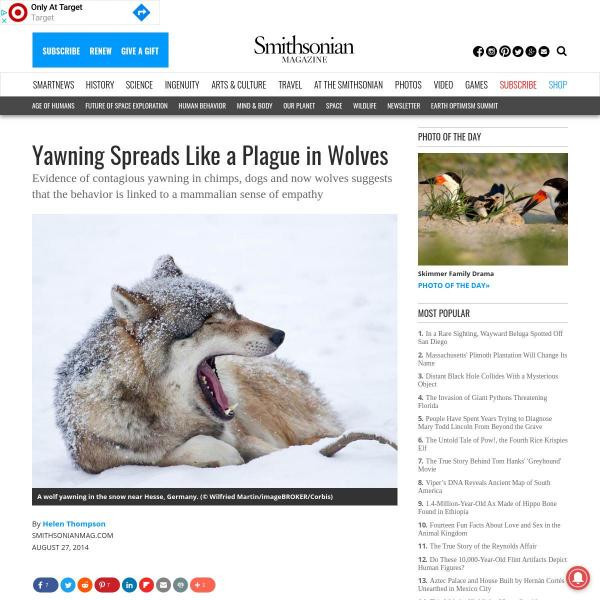