Change Author / Owner : You Can Still Stay a Night at These Grand Hotels From the Gilded Age

"It may add years to one's life to spend a season in the mountains," crowed one 1902 brochure about America's Rocky Mountain resorts. Another extolled the health benefits of spa visits for Victorian city slickers with "weak hearts, disabled lungs, and worn-out nerves." Colorado's pioneering role as a wellness destination has left it today with a rich concentration of stately Victorian hotels, including the Stanley in Estes Park, the Cliff House in Manitou Springs and the Hotel Colorado in Glenwood Springs—plus such creative originals as Dunton Hot Springs, a ghost town that has been reborn as a quirky boutique hotel property.

But Colorado's resorts were part of a broader American phenomenon. By the end of the 19th century, as taste for domestic travel flourished, every beach, mountain or hot spring across the country seemed to sprout a grand hotel offering luxuries once only seen in Europe, with rates starting at a princely $3 a day for lavish room, haute cuisine and high tea. Housing up to 1,800 guests, these hotels were like self-contained miniature cities, with shops, gardens, courtyards and marble driveways. One awe-struck French traveler observed in 1887 that these sumptuous resorts were destinations themselves, becoming to Americans "what cathedrals, monuments and the beauties of nature are for us."

Sadly, as holiday tastes changed, many of these plush hotels could not keep up. Some were demolished during the Great Depression, others burned to the ground (most were made of wood and went up like tinder boxes), still others were taken over by the military during World War II. Americans' tastes shifted, and most hotels that clung to their 19th century fashions went broke, unable to maintain their vast structures and grounds. "Hotels have to change with the times, or the public will pass them by," observes Chris Donovan, the official historian of the famed Hotel del Coronado (built in 1888) in San Diego. "It's not colonial Williamsburg!"

And yet, despite this Darwinian travel climate, a surprising number of Gilded Age resorts have managed to endure into the 21st century, often after pulling back from the brink of disaster or bankruptcy. These great survivors offer travelers a rare chance to immerse themselves in Old World pleasures amongst luxuries that have been updated for contemporary tastes. The following are some of the era’s classics. 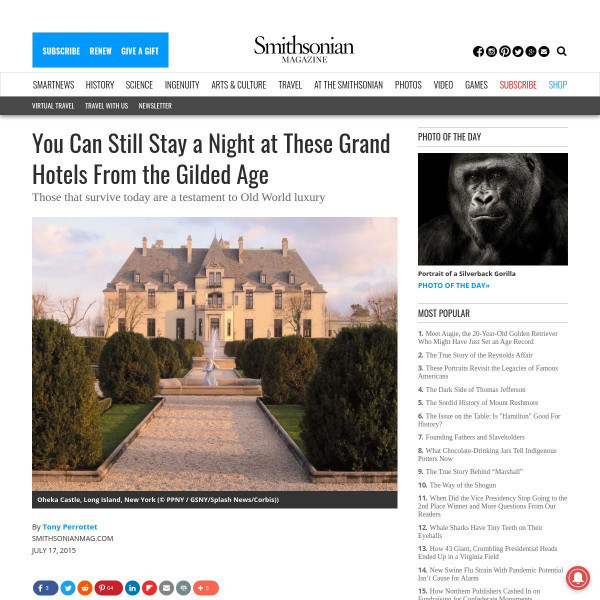