How Filmmakers Distill Science for the Big Screen
Description

One day, Isaac Newton was sitting under an apple tree, minding his own business, when an apple fell on his head. Eureka! Just like that, he understood gravity.

Okay, that’s not quite how it happened. But in the annals of scientific history, it's these kinds apple-on-the-head moments that worm their way into our collective memory: neat, satisfying discoveries in which paradigms are shifted and new paths paved. In reality, science is an altogether more complex, messy, and just generally less sexy beast. It can take decades of lonesome, repetitive work—pipetting liquids, plating bacteria, calculating trajectories, sketching insects—to get even a taste of discovery.

Therein lies the challenge of capturing the authentic process of science on the big screen. Yet that was the aim of a new docudrama movie Amazon Adventure. This film, which premiered April 18th at the Smithsonian National Museum of Natural History in Washington, D.C., delves into the work of famed 18th-century naturalist and entomologist Henry Walter Bates to tell the tale behind the key discovery of animal mimicry. Along with Charles Darwin and Alfred Russel Wallace, Bates helped developed ideas that contributed to the emerging theory of evolution.

Born as the son of a Leicester hosiery maker, Bates was destined for life in the industry. But the natural world never stopped calling him. In 1848, with the support of a London agent who bought and sold exotic specimen, Bates headed to the Amazon to study how—and if—species change over time.

Despite bouts of malaria and yellow fever, he toiled in the rainforest for 11 years, documenting over 14,500 species, 8,000 of them new to science. Eventually, he did have his own apple-on-head discovery. It came in the form of butterfly wings. He eventually figured out that species of butterfly that were perfectly harmless would—over generations—develop the same coloring as its noxious longwing (Heliconius) cousins, a process now known as batesian mimicry. By playing the copycat, these mimics successfully kept wary predators off their backs.

“It may be said, therefore, that on these expanded membranes Nature writes, as on a tablet, the story of the modifications of species,” Bates wrote in a book about his adventures, Naturalist on the River Amazon.

It’s a nice story. But the reality is that it took years for Bates to arrive at this "aha" moment, and the producers of Amazon Adventure wanted to encompass that journey in its entirety. We talked to Sean B. Carroll, an evolutionary biologist and executive producer of the film, about how he shaped a compelling visual narrative for viewers while sticking close to the scientific facts. Let’s just say it took some real, well, adaptation.

How do you approach telling stories of science, which may not be the most exciting on the surface?

We're going for insight into the motivations of scientists—not just the content of their discoveries. Story is the whole key.

This film is weaving three threads: there's a science discovery story, there's a drama and there's the natural history. I’ve written several books, so I’m used to seeking out stories as a writer. But then you’ve got to put it on a screen. You've got 45 minutes in IMAX. (That's the standard format so they can turn over the theatres on the hour.) So you're not going to have the luxury of unpacking the story at a leisurely pace.

But in the hands of the right people I think you can create a powerful experience that's more accessible to a wider audience than those who would call themselves science fans. These films help a broader audience connect with scientists and realize what would drive them to build a little machine and hurl it out to the edge of our solar system; what would drive people to spend their life in a forest or on a Savannah or in a pacific tidepool to try to understand the rules of life.

Science alone would not make a great movie. You have to get inside the skin of these people to know what makes them tick. What are they hoping for? Why are they striving? What are they up against?

Were you concerned about misrepresenting the science or the history because this was such a condensed version of the tale?

This film we all knew—both creative and science sides—had to pass a high bar of expert appraisal. And that's not easy to do while telling a good story that's also visually immersive.

The process here is really important. The combination of science and history advisors interacting with a very committed producing team helps us remain faithful to the record. Sometimes you're actually solving problems and puzzles: What did Bates know before he came home? Why would he be so motivated to find something?

There was also a tremendous effort for authenticity both historical and natural. So for example in London when you use him reconstructing the chain of butterflies and you see those boxes of butterflies—those are actually Bates’ butterflies lent to us from the Natural History Museum in London. [Part of the movie was also filmed outside Darwin’s family home in Kent.]

Working with such a large team of scientists, did you often disagree about what made it in the film and what got cut?

We worked very hard to portray Bates’ role, Bates’ contribution, Bates’ relationships with Wallace and Darwin in as faithful a light that we could. And that meant, of course, sometimes it got tense. But that's what good rigor requires.

What got tense was the question of: How much understanding could we attribute to Bates before he left the Amazon? He didn’t write scientific papers about mimicry until he got home. So how much did [these ideas of how species change] appear to Bates in the Darwinian writing?

There’s sort of a little mutualism there between Darwin and Bates, Darwin didn't have the kind of evidence Bates had.

So Darwin had the explanation that Bates needed, and Bates had the evidence to support Darwin’s ideas. How did you resolve what Bates knew?

We went through a lot of iterations. But we got around to what I think is the best supportable view: He was striving to understand it, but he hadn't reached what we would call natural selection [until after reading Darwin’s On the Origin of Species].

Bates comes back from the jungle after 11 years. He's observed these really close resemblances and thought about how they come about. He probably didn’t arrive at an explanation while in the Amazon, but he recognized it on reading Darwin. At the same time he said to Darwin something like, "I have a glimpse into the laboratory where nature manufactures her species." And Darwin's like, "tell me more."

You wrote about Bates prior taking on this film. Was there anything you learned about him in the movie research that surprised you?

This film really forced me to think about what Bates was doing for 11 years. I mean wow; eleven years in the middle of the 19th century: Malaria, yellow fever, the rainy season, scarcity of food. Oh my god, how did he stay at it?

Every time you visit these stories you see into the souls of these characters. And as I know these stories better, my admiration for these people just keeps going up. Wallace stayed four years in the Amazon and then eight years in the Malay Archipelago, and Bates was 11 years in the Amazon, and Darwin five years on the Beagle. Can you imagine when these three men were together? Was there anyone on the planet that had their feeling for nature and had paid dues that great?

That's why they had such respect and affection for each other—not rivalry, not bitterness, not pettiness—just absolute eternal respect.

The movie Amazon Adventure will premiere in 3D IMAX April 18th at the Smithsonian National Museum of Natural History in Washington, D.C. and will be playing at theaters across North America. 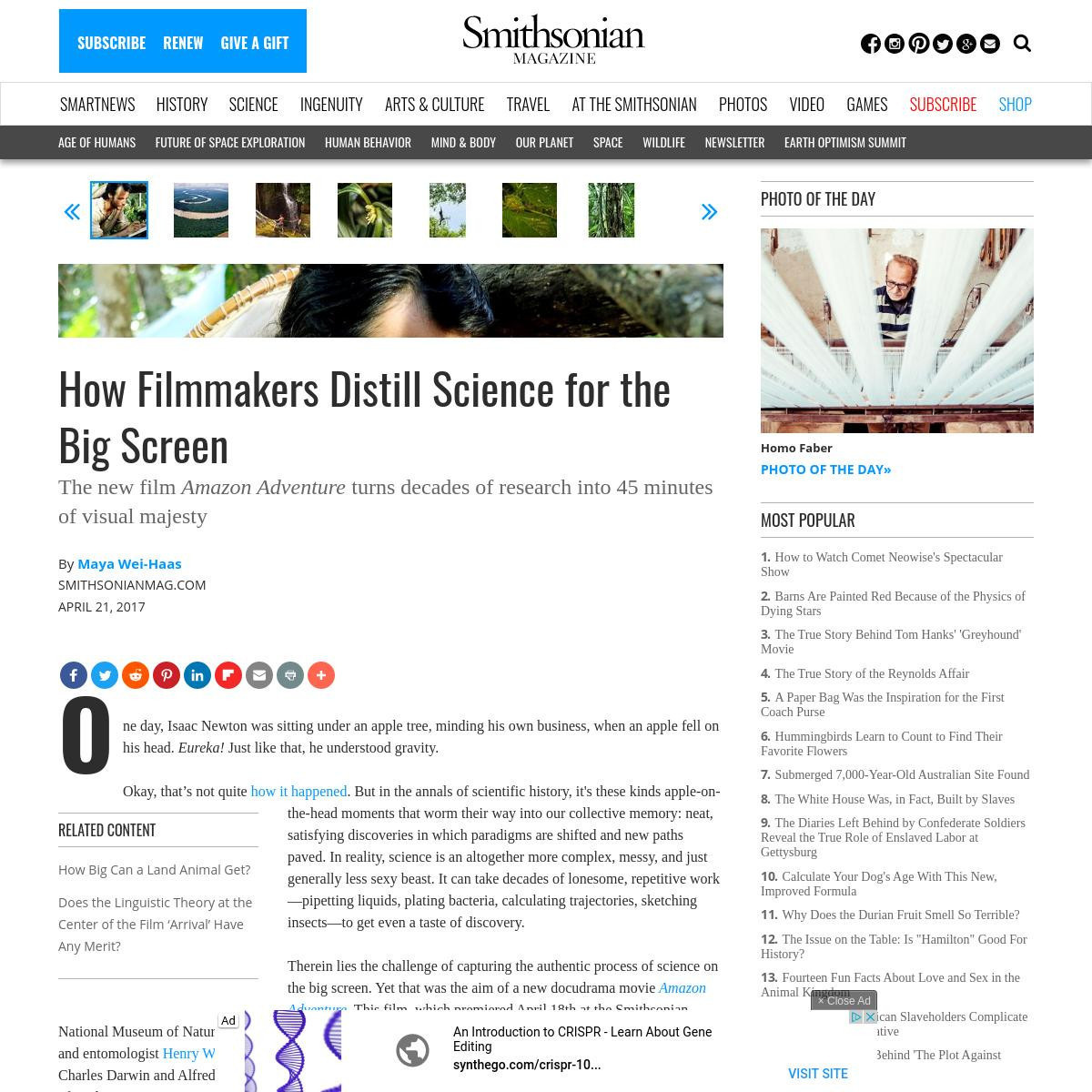