NMAAHC is the nineteenth Smithsonian Museum

"A Century in the Making: The Journey to Build a National Museum," Smithsonian's National Museum of African American History and Culture (blog), Tumblr. August 24th, 2016, http://nmaahc.tumblr.com/post/149430396115/a-century-in-the-making-the-journey-to-build-a.

The Time Has Come: Report to the President and to the Congress". National Museum of African American History and Culture Plan for Action Presidential Commission, last modified April 2, 2003, http://nmaahceis.si.edu/documents/The_Time_Has_Come.pdf.

The National Museum of African American History and Culture (NMAAHC) is opened on September 24, 2016 by President Barack Obama during a three day festival on the National Mall produced by Quincy Jones, a member of the museum's advisory board. The only national museum devoted exclusively to the documentation of African American life, history, and culture, its goals are 1) to provide an opportunity for those who are interested in African American culture to explore this history through interactive exhibitions; 2) to help all Americans see how their stories, their histories, and their cultures are shaped and informed by global influences; 3) to explore what it means to be an American and share how American values like resiliency, optimism, and spirituality are reflected in African American history and culture; and 4) to serve as a place of collaboration that reaches beyond Washington to engage new audiences and to collaborate with museums and educational institutions that preserved this important history well before this museum was created.

NMAAHC was established by law in 2003, the culmination of decades of efforts to commemorate African American history. African American civil war veterans began the push to commemorate the African American influence on America with a place on the National Mall in 1915. Veterans of the US Colored Troops were nearly excluded from a 50th anniversary Grand Review Parade celebrating the victorious Union Troops. USCT veterans formed a Committee of Colored Citizens of the Grand Army of the Republic to make sure their military service was remembered and provide help with housing, food, and logistical costs for African American veterans. After the parade, funds from this committee went to a National Memorial Association to create a more permanent memorial to African Americans' contributions to America. The association's aim was to build a building to depict African Americans' contributions in all walks of life, not just military. While no site was designated, the National Mall was the committee's goal.

Despite significant racially charged opposition, this Association worked long and hard to accomplish their goal, and with significant grass roots support that overcame congressional racism, a joint resolution creating a commission for the museum was signed into Law by President Coolidge on March 4, 1929. Unfortunately, due to the stock market crash later that year, the commission was unable to raise funds and the museum was never built. The civil rights movement of the 1950s and 1960s, and the assassination of Dr. Martin Luther King, Jr. in 1968 galvanized interest again. An initiative by Tom Mack, president of Tourmobile Sightseeing, a DC shuttle tour company, led to a 1986 Joint Resolution sponsored by Representatives Mickey Leland of Texas and John R. Lewis of Georgia and Senator Paul Simon of Illinois "to encourage and support" private efforts to build a memorial and a museum in Washington, DC.

Starting in 1988, new bills were introduced annually in the Congress by Rep. John Lewis to create a National African American Heritage Museum and Memorial within the Smithsonian Institution. In 1991, a Smithsonian blue-ribbon commission recommended the creation of a national museum devoted to African Americans to collect, analyze, research, and organize exhibitions on a scale and definition that matched the major museums devoted to other aspects of American life. The commission recommended that the museum be temporarily located in the Arts and Industries Building until a new, larger facility could be built, but the legislation stalled amid controversy about funding and the appropriateness of the site. In 2001, a new bipartisan coalition of Representatives John Lewis and J. C. Watts, Jr., and Senators Sam Brownback and Max Cleland renewed efforts to establish a National Museum of African American History and Culture within the Smithsonian Institution. Renewed questions about funding and feasibility of using the Arts and Industries Building resulted in the passage of P.L. 107-106 on December 28, 2001, which established the NMAAHC Plan for Action Presidential Commission to develop a feasible plan to move forward with the museum. 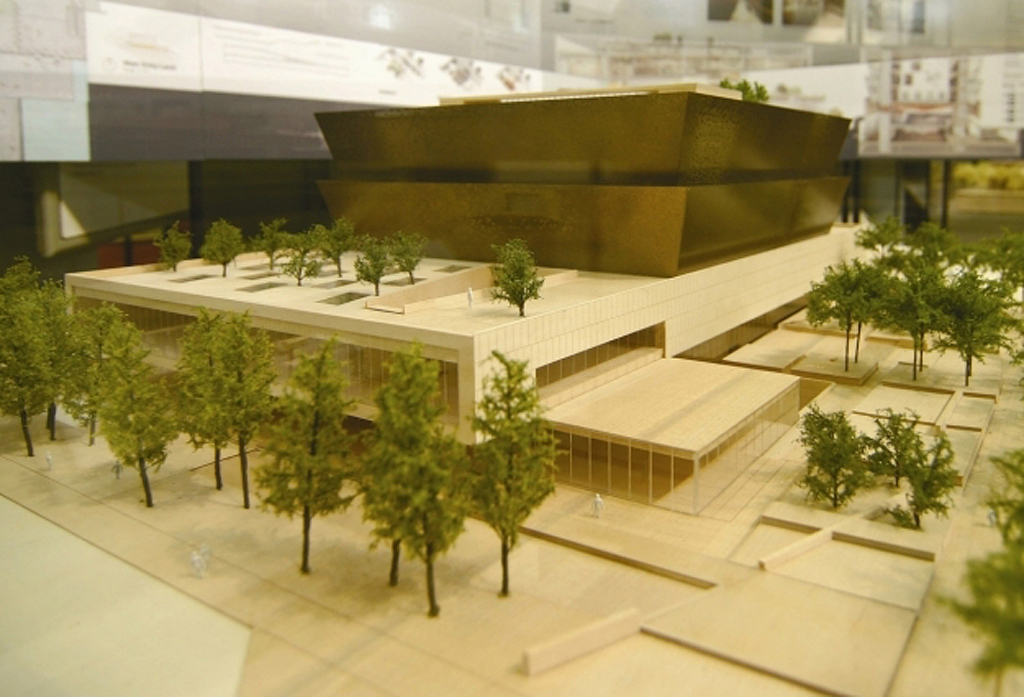