Change Author / Owner : Where Did the FDA Come From, And What Does It Do?

In the past month, the Trump administration has already started to reshape the alphabet soup of federal agencies that regulate Americans’ food, air and water. Most of the spotlight has been on the Environmental Protection Agency, which underwent a hearing this week titled “Make EPA Great Again” that laid out a controversial bill seeking to limit the scientific data the agency can use to create regulations. But there are plenty of other science-focused agencies that regulate issues critical to Americans’ health and well-being.

As fundamental changes come to some of these agencies, it’s worth looking back at how they originated and what they actually do. We’ll start with the Food and Drug Administration, which exists to ensure the safety of America's food, cosmetics, drugs and medical devices. For most Americans, the phrase “FDA approved” serves a seal of trust: It means that the product in your hands—whether it’s a tube of lipstick, an insulin pump or a condom—has been deemed scientifically, medically and nutritionally sound. But who’s doing all that vetting?

Overall, the FDA estimates that it regulates roughly $1 trillion worth of products annually. These include consumer products that emit radiation, such as microwaves and sunlamps, and even tobacco products and pet and livestock food and medicines.

The FDA conducts this regulation through the rules it issues, and employs more than 14,000 people to inspect food and drug production and conduct research into new technologies for inspection. (Meat, poultry and eggs fall under the jurisdiction of the Department of Agriculture, while tap water falls under the purview of the EPA.)

How it came to be

The FDA got its start with the passage of the country’s first major food and drug safety bill, the 1906 Pure Food and Drug Act. That law's origins stem from a decades-long fight for the government to regulate food.

As the Industrial Revolution swept America, the production of food and medicine became a large-scale enterprise. Inventions like canning allowed foods to last long enough to be shipped around the country, and sit on store shelves for extended periods. Meanwhile, "patent medicines" started being sold in catalogs for a variety of ailments. This industrialization put a new veil between consumer and product: Besides artful labels and hyped slogans, there was no way of knowing what a product really contained.

Naturally, manufacturers began to exploit this ambiguity. Using spices or additives, canners could mask the taste of expired meat and other substandard ingredients. Many patent medicines ended up relying on large quantities of morphine or cocaine to give users a high instead of actually healing them.

The federal government largely took a hands-off approach to food and drug safety at this time. It didn't help that manufacturers had a significant influence on Congress through aggressive lobbying. But there was resistance from within: One of the most powerful advocates of food and drug regulation was Harvey Wiley, who served as head of the USDA's Bureau of Chemistry. Wiley’s official role was to support scientific developments to help farmers, but his passion was to make America's foods and medicines safe.

Wiley tapped into a network of powerful support: millions of American women who feared for the safety of themselves and their families. Led by activist Alice Lakey, these women formed an unstoppable crusade of lobbyists. "Historians and Dr. Wiley himself credit the club women of the country for turning the tide of public opinion in favor of the 'pure food' bill," FDA historian Wallace Janssen wrote in 1981.

The crusade for the Pure Food and Drug Act received a final push from the 1906 publication of Upton Sinclair's The Jungle. This powerful exposé, which set out to document the inhumane labor conditions in America's factories, also ended up drawing attention to the horrifically unsanitary production of many processed foods. As Sinclair famously wrote: “I aimed at the nation's heart and by accident hit its the stomach." Around the same time, muckraking journalist Samuel Hopkins Adams published a 12-part expose on the fraudulence and dangers of the patent-medicine industry in the widely read Collier’s magazine. Soon after the book and series’ publication, an outraged President Theodore Roosevelt signed the bill into law on June 30, 1906.

The law was nicknamed the Wiley Act, and regulation power was given to Wiley's Bureau of Chemistry. Later amendments and laws expanded and reorganized the agency, which eventually grew into today’s Food and Drug Administration.

The FDA has maintained its watch over the American consumer for a century. One of its most famous accomplishments was its rejection of thalidomide, a widely used drug that was later revealed to cause significant birth defects. The drug was marketed extensively in Europe in the late 1950s as a way to suppress morning sickness in pregnant women. At the time, doctors thought that drugs given to a mother couldn’t affect fetuses. Thus, they didn’t even bother to test its safety for developing babies.

When thalidomide’s manufacturers sought approval from the FDA to sell the drug in the U.S. in 1960, FDA inspector Frances Kelsey put the brakes on the process by requesting the company conduct more safety studies. The following year, reports of thousands of babies being born with severe birth defects started coming out. The FDA’s work on thalidomide earned Kelsey praise from President John Kennedy and helped spur the passage of amendments strengthening the FDA’s drug review process.

“Her exceptional judgment in evaluating a new drug for safety for human use has prevented a major tragedy of birth deformities in the United States,” Kennedy said while awarding her with a medal for distinguished federal service in 1962.

One of the biggest critiques against the FDA in recent years has been for its continued approval of opioid medicines, despite the increasingly devastating epidemic of opioid abuse nationwide, with overdoses now killing 91 people per day, according to the Centers for Disease Control.

“They’re listening to these patients, and the people who stand to gain a lot financially from opiates, instead of taking notice of the evidence,” University of Washington physician Jane Ballantyne told Roll Call in 2015.

Ballantyne, who also served as president of the Physicians for Responsible Opioid Prescribing, said that the FDA had repeatedly declined to consider the highly addictive nature of opioid drugs when it reviewed the medicines. This left many patients unaware of the dangers of the pain medicines they were prescribed.

Marion Nestle, a food historian and professor of nutrition and food studies at New York University, also worries about the FDA’s rapid approval of many other kinds of drugs. This process, she says, has led to the approval of controversial drugs that she believes should not have been marketed. “The drug industry wants fast approval of the drugs that it’s coming up with, whether they work or not,” she says.

The majority of the FDA's leaders have been medical doctors. This includes the most recent Commissioner of Food and Drugs, cardiologist Robert Califf. Califf, who worked at Duke University for 35 years before being appointed by President Barack Obama to serve as commissioner in 2015. In an exit interview with the Washington Post last month, Califf defended his efforts to speed up the approval of generic drugs to fight the rising cost of medicines while still cracking down on ineffective medicines.

"I think we have pretty clear evidence from the public that they would like to have a system that's giving them some assurance that the treatments they are given work," Califf says.

In response to rumors that the next FDA commissioner may come from the investment world, Nestle says that a non-medical or scientific figure would reshape the agency in potentially negative ways. “To put somebody who doesn't have any science background at all in that job turns it into a very different kind of agency,” says Nestle, who has also served on the FDA’s science advisory board. She also calls for strong future government support for the FDA, despite its shortcomings.

“It's an enormously important agency that needs more funding, not less,” she says.

Maggots are an FDA-approved medical device. In 2004 the agency certified that doctors could use these creepy-crawlies to safely clean dead and infected tissue from open wounds, and help stimulate healing growth. And they aren't the only bug the agency regulates: Leeches and worms are also recognized as medical treatments. Something to think about the next time you see the words "FDA approved."

Editor’s note: This is the first in a series of Smithsonian primers on science-driven government agencies and how they came about. 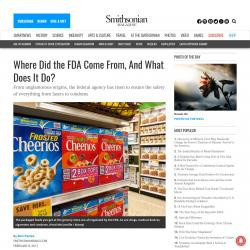 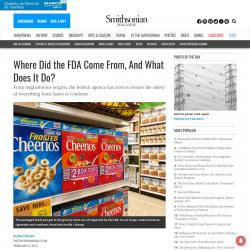