Change Author / Owner : These Flowers Come Straight From the Farm to Your Door

Take a close look at that bouquet that just arrived for Valentine’s Day. Where were your flowers grown?

There’s a good chance they came from Ecuador, raised in a greenhouse on the sun-drenched flank of an Andean volcano. But once harvested, the blooms usually take a lengthy detour to get to you: a third-party handler typically ships them to a warehouse where they can wait for weeks in cold storage before arriving on your doorstep. It’s not their fault they end up looking a little worse for all that wear.

But why go through all that, if less product is wasted (and the resources to grow them) by waiting to cut the flowers until they’re ordered, and shipping them straight to customers?

That’s the approach of The Bouqs Company, a startup headquartered in Venice, California. But the company’s true heart lies in Ecuador, home country of co-founder by J.P. Montufar. Raised in and around agriculture, he returned to his native country after earning business and biochemistry degrees from the University of Notre Dame and working in in the San Francisco biotech scene. Since founding Bouqs in 2012, Montufar and his partner John Tabis have enlisted around 50 partner farms in the United States, Ecuador and Colombia.

A new round of investing announced last month brings their total seed funding to $43 million; clearly more than a few people think the model is worth a gamble.

The flower industry in Ecuador, and rose-growing in particular, has been both a boon and a burden for the country; while it created more than 115,000 jobs in 2008, occupied mostly by women, and exported $800 million worth of cut flowers in 2015, the industry has grappled with water overuse and the human impact of horticultural chemicals.

But going right to the customer is one way, at least, operations like Montufar’s can shield themselves from the vagaries of the international market, says Gregory Knapp, a professor at the University of Texas at Austin and author of an upcoming journal article on the Ecuadorean flower industry.

“Cut flowers are the first highly lucrative global agricultural export from the high Andes, and because it’s decentralized, the benefits are spread fairly widely,” Knapp says. “Plantation workers are paid wages unavailable elsewhere, and they use their earnings to invest in their farms, health care and education. Despite many predictions of its imminent demise stretching back decades, the high Andean cut flower industry has continued to thrive. I wouldn’t bet against it at this point.”

Gail Nonnecke, a professor of horticulture and expert in global resource systems at Iowa State University, says Bouqs’ strategy is made easier by shipping flowers in small batches on existing international flights. It also uses a model that’s been the norm throughout most of the history of modern agriculture: purchasing straight from the farm or a farmers market.

“Having direct-to-consumer flower sales from South America, which are transported on airplanes already traveling to the US and delivered to the US consumer, is a novel adaptation of the earliest forms of agricultural marketing,” Nonnecke says. “It’s the farmer or farm group selling directly to the customer.”

Smithsonian.com reached Montufar on a quick break in a greenhouse near the Cotopaxi volcano outside of Quito, Ecuador to talk about his business and how he hopes his company’s approach can change the flower business. Warning: he gets really excited about mold.

Why did you decide to market directly to customers?

[Co-founder John Tabis] and I realized something is broken in sourcing flowers and servicing customers. Sourcing them directly from a farm means we can offer a fairer rate to the grower. And flowers are the most delicate and time-sensitive perishable product you can work with—the more you touch them, squeeze them, store them and move them, the more they’re affected. Since the life of a flower is short, it seemed obvious to us to get rid of the wasted time in the middle steps of the process. When the recipient gets their flowers, the last time they’ve been touched is by the farmer. We restore a connection that’s been lost.

Talk about your company’s approach to pesticides and chemicals.

For this business to work, one has to be very responsible, both socially and environmentally. From an ethical standpoint it makes sense, but it also makes sense financially. Any farm we work with must be certified by a third party as not using any “red-label” [highly toxic] chemicals, and many have certifications from the Rainforest Alliance and fair-trade groups. We have traceability for each of our stems.

A farm that doesn’t take care of the environment and their people is a farm that will not, in my humble opinion, survive in the medium or the long term. That’s not a farm I want to engage in. If you’re cutting corners environmentally, you’re probably also doing it with quality control practices.

How have you used your knowledge of biology and chemistry to influence your fellow horticulturists?

There’s been a huge shift from chemical use to biological controls and sustainable fertilizer. We compost anything not suited for export, and not just waste from the flower farm, but egg shells and orange peels, which by the way also provides a natural fungus that helps convert vegetable matter into available carbon. We’ve also had great success with the control of grey mold, which rots flowers from the inside out, by developing a system at each of our locations to capture, grow and propagate strains of local molds that combat the grey mold but don’t hurt the plant. As well as being more effective and cheaper than chemical counterparts, it’s easier on the employees, too.

But I can’t take credit for any of these ideas. A lot of them come from scientific research papers at universities. What my expertise allowed me to do is see what could be performed in-house and why. I just hope I’ve had some influence as a biological consultant to some of our partner farms.

Has there been much resistance to changing growing practices in Ecuador?

My goal is to get everyone to produce better roses, especially in Ecuador. My expertise is an open book to everyone whether we work with them or not. It’s a cheap and logical change, but if you’re a flower grower, everyone is against you—the rain, the sun, the government, and then when someone comes in and says, try this! I understand why a lot of folks would be hesitant to change what works for them, even if it’s not optimal. But with a little bit of time, data, numbers and proof that the farm won’t go down in two days because you made a change, little by little, there is change.

How does Bouqs build its farm network?

We build up our supply network depending on which flower we need, and where the best of those flowers are grown. For example, the best spray roses are in California and the best roses are in Ecuador. Once we’ve located where those flowers are grown, we have a very thorough checklist of standards and best practices that all of our farm partners must meet. This process includes our farm operations team conducting site visits, ensuring the farm’s certifications are current, making sure they are financially stable, and that there are responsible labor practices in place.

Then the next step is testing the product quality. We know what our customers expect, so it’s crucial that the farm meets those quality standards.

Then lastly, once the partnership is made official, we work to be sure all of the certifications remain current and we continue making regular site visits. We also want to encourage our farms to experiment with new varieties so we can work with them to offer new things.

How do the farms’ geographic locations affect what flowers Bouqs can offer?

Flowers with bulbs require four seasons, and it is not that easy to mimic that. Tulips and peonies grow much better in temperate zones than tropical zones, so we look for them very far north in North America or further south in South America. But tropical flowers, like ginger, are obviously going to grow in more tropical areas.

For roses, we look at both altitude and proximity to the equator to determine if a geographic location would be ideal.

So your farms can be far apart—how can you guarantee quick deliveries?

With air travel, the world is a small place. Of course the further away a farm is, the more it costs us to bring them in to the U.S. in a timely manner. But it’s not the distance that necessarily affects the freshness of the product, it’s the delays caused by the customs, agriculture and IRS inspections.

Our same-day delivery options are fulfilled by a network of hand-picked artisan florists around the country. We allow our florists the flexibility to be creative in their designs. There’s no “painting by numbers,” which allows for more craftsmanship and unique designs. 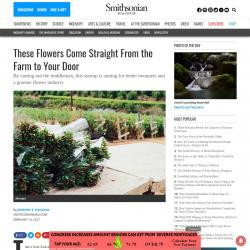