Change Author / Owner : Are We Close to Having a Blood Test That Detects Cancer?

We’re about seven months into the “Cancer Moonshot” mission, the federal project with the ambitious goal of doubling the rate of progress of cancer research. It’s President Barack Obama’s reboot of the “War on Cancer,” which despite more than $100 billion in government spending since the 1970s didn’t really make a big difference in the overall cancer death rate in the U.S.

While “Cancer Moonshot” may seem simply a new name for the same daunting challenge, it actually has a much better chance of success. Not only do scientists now have a clearer understanding of the complexities of the disease and a realization that there is no one cure for all cancers, but they also have the benefit of supercomputers that can analyze an enormous amount of cancer research and the mapping of the human genome.

The latter has opened up promising avenues of treatment, such as new bio-technology that creates immune cells to fight cancer, and more precise treatments based on a patient’s DNA.

At the same time, real progress is being made on another key front—the ability to detect traces of cancer in a person’s body without needing to do something as invasive as a conventional biopsy. The process, known as a liquid biopsy, involves only drawing blood from a patient.

What tips off the presence of cancer are fragments of mutated DNA released by tumor cells into a person’s bloodstream. These can be found by scanning the blood through a gene-sequencing machine. Since early detection has long been considered a key to surviving cancer, scientists are hopeful a blood test that lets doctors know cancer is present before it begins to spread could make a big difference in the number of people who beat the disease.

It could also become a huge business. Some analysts have estimated that liquid biopsies could soon become a $10 billion-a-year industry. This, not surprisingly, has helped spark a flurry of research on the technology, and some positive results have recently been reported.

Earlier this month, a team of researchers from Johns Hopkins University and the Walter and Eliza Hall Institute of Medical Research in Australia published a study suggesting that they could pretty accurately predict if a colon cancer patient would have a recurrence of the disease. After doing a series of liquid biopsies on 230 patients over two years, they found that 79 percent of the patients whose blood still had traces of tumor DNA after surgery suffered a relapse. These were all patients with stage 2 colon cancer that had not yet metastasized.

The test wasn’t perfect. Almost 10 percent of the patients who didn’t appear to have tumor DNA in their blood had their cancers come back. Still, the scientists said the liquid biopsies could provide a strong indication as to whether a patient was cured through surgery or if he or she also needed to be treated with chemotherapy to take care of cancer traces that remained.

Last month, at the American Society of Clinical Oncology conference in Chicago, researchers presented the largest study yet of liquid biopsies, reporting that blood tests to detect cancer mutations largely agreed with what was found through conventional biopsies. In that case, the scientists analyzed more than 15,000 liquid biopsies that had been performed by Guardant Health, a Silicon Valley startup.

Those blood samples came from patients with several different types of cancer, including lung, breast and colorectal. For about 400 of those patients, there were also tumor tissue samples. When the blood samples and tissue samples were compared, the researchers found the same cancer mutations in both more than 90 percent of the time.

Those impressive results were for a gene mutation associated with tumor growth. There was less agreement between the two types of biopsies, however, when the scientists analyzed mutations that indicate potential resistance to certain drugs. Also, for about 15 percent of the patients overall, the liquid biopsies didn’t show any evidence of the tumor.

This recent research does boost the prospects for liquid biopsies, but the tests still have a long way to go before they’re considered reliable enough to replace more invasive biopsies. So far, studies have involved samples from patients who were already known to have cancer. That suggests liquid biopsies could be useful in monitoring tumors to determine if a treatment has been effective.

But the evidence is less convincing that they can be trusted to find cancer on their own. Medical professionals worry about false negatives, in cases where some cancers may not secrete the DNA fragments early in the development of the disease, and false positives, where a test may pick up evidence of cancer in a very early stage that could be eliminated by the body’s immune system. Those patients might end up going through an unnecessary round of invasive tests. The overall concern is that patients may begin viewing liquid biopsies as a relatively painless screening test for all cancers, and will start requesting them to avoid unpleasant procedures, such as colonoscopies.

“I would argue that implementing an unproven screening program could violate the medical affirmation to 'first, do no harm,'" wrote Richard Hoffman in the Health News Review. Hoffman, director of the Division of General Internal Medicine at the University of Iowa Carver College of Medicine, argues that more evidence is also needed to show that early detection will actually increase a patient’s lifespan, so that they’re not submitted to the physical and financial demands of treatment years before it’s necessary.

Last fall, the FDA sent a warning letter to a company called Pathway Genomics that was marketing blood tests, costing between $300 and $700, as an early cancer detection tool. The federal agency said it had found no clinical evidence that a blood test could serve as a valid screen for cancer.

Nonetheless, a number of companies are banking on liquid biopsies becoming a boom business. Earlier this year, Guardant Health, the firm involved in the study presented in Chicago in June, announced that it had raised $100 million in funding, while another, Exosome Diagnostic, said it had raised $60 million.

Around the same time, Illumina, the world’s largest maker of gene-sequencing machines, raised about $100 million to start its own liquid biopsy company. Among the investors are Microsoft co-founder Bill Gates and Amazon founder Jeff Bezos.

To get a sense of their expectations, consider that they’ve named it Grail. 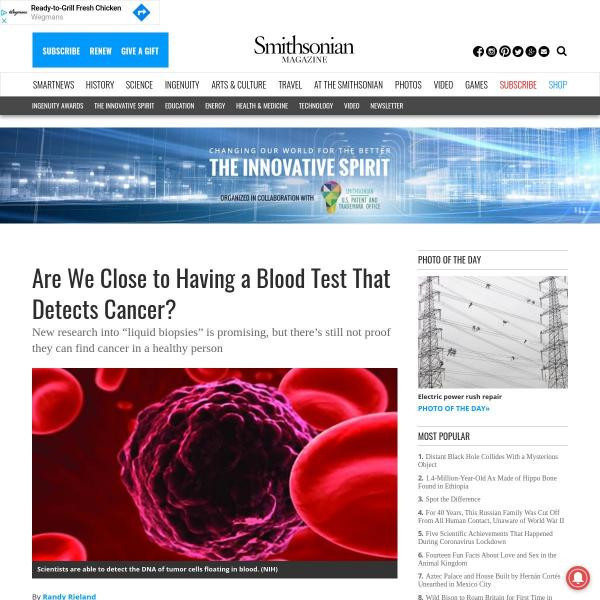