Defying Stereotypes, Ducklings Are as Clever as They Are Cute
Description

Conventional wisdom states that, newly hatched, a duckling will immediately clamp onto the first suitable mother figure it lays eyes on. We often see this ability, known as imprinting, go awry—in the form of a line of ducklings waddling behind a dog, person, or cat. This kind of adorable slip-up might be taken as evidence that ducks aren’t exactly the smartest creatures in the animal kingdom—you might even say they’re a bit, well, bird-brained. But is that true?

Actually, a duckling’s ability to imprint confers a remarkable ability for abstract thought, often associated only with primates and other animals considered highly intelligent. Ducks even outperform supposedly “smarter” animal species in certain aspects of abstract reasoning. Just hours after birth, those yellow fuzzballs understand concepts like “same” and “different,” remember them, and apply them to never-before-seen objects with no social cues or training whatsoever, researchers report in a study published this week in the journal Science.

To explore how ducks think, researchers exposed newborn ducklings to a variety of objects, showing them pairs that were either the same or different, in characteristics like shape or color. Later, when shown completely different objects, three-fourths of the ducks got up and followed the pair that had the same relation they'd originally seen—whether it was one of color or shape, sameness or difference—parading after them the same way they'd line up and follow Mrs. Mallard.

For example, newborn mallards who were first exposed to two spheres (same), later chose to follow a pair or triangles (same) rather than a cube and a cuboid (different). “We hatch them, we give them about 12 hours to dry off, and once they able to walk they are able to do this and learn it with great accuracy,” says Antone Martinho a cognitive scientist at the University of Oxford and co-author of the new study.

This kind of relational matching behavior has been observed in certain primates, like monkeys and apes (and of course humans), and a few other birds, like parrots and crows. But again, these animals are all generally considered to be far more intelligent than ducks.

Plus, those species exhibited relational matching behavior only after going through training that rewarded correct associations and punished incorrect ones. In ducks, by contrast, this ability appears to be virtually innate. “To our knowledge, this is the first demonstration of a non-human organism learning to discriminate between abstract relational concepts without any reinforcement training,” said co-author Alex Kacelnik, of Oxford University's zoology department, in a statement.

How are ducks able to cognitively able to perform such seemingly-advanced cognitive tasks so soon after entering the world? It seems there’s more to imprinting than meets the eye.

“Imprinting allows ducks to identify who their mother is on the first day of their life,” Martinho says. “In this experiment we are essentially hijacking that normal, but remarkable, behavior. We already knew that ducks would be very good at learning quickly because that's what they are built to do. But the fact that, within that behavior, they can learn something abstract was certainly startling. And they do it quite a bit faster than we see in other species.”

“That's more of a testament I think to their innate ability for imprinting, coupled with their ability to recognize abstract concepts, rather than simply being faster at abstract concepts than other species,” he adds. “This is two abilities combining to produce a stunning result.”

Edward Wasserman, an experimental psychologist at the University of Iowa who wrote a commentary on the study in Science, said the study added on to our understanding of abstract thought in animals. First, it demonstrated abstract thinking in a bird considered not particularly intelligent. But it also showed that abstract thinking can occur in animals just hours old, suggesting that prior learning isn't needed for this kind of ability. Finally, it showed that learning could take place with no instruction or system of reward and punishment.

“Those three things produce a powerful mix that makes this an unprecedented and important project,” says Wasserman, who has showed that pigeons can recognize and categorize objects much as human toddlers do and helped a Russian team explore how crows can match objects without training.

He adds that being able to distinguish likeness and difference is a more advanced process than just knowing what the mother looks like standing still. When ducks dive, fly or move behind a bush, their shape and appearance changes to the viewer, which would cause youngsters relying on a fixed image to lose them.

“If animals are just taking a sensory snapshot, something akin to a photo where it's a case of, 'I see my mother, I remember exactly what my mother looks like at this moment in time and I'm going to use this image ingrained in my brain to follow her'—that's not going to work," he says.

Given how crucial it is for ducks—as well as crows and parrots, which are only distantly related on the avian family tree—it's likely that of abstract thinking is actually more common across animals than previously thought. “The suggestion from this evidence is that relational learning is something far more widespread in the animal kingdom than we might have suspected,” Wasserman says. Examples are mounting: One study has even suggested that honeybees can discriminate between the paintings of Monet and Picasso.

If that's true, another fascinating question to explore is the origin of abstract thought. As Wasserman puts it: “Did the wheel get reinvented many times, or might relational learning be exceptionally old and we're just now with our very young science discovering it?” 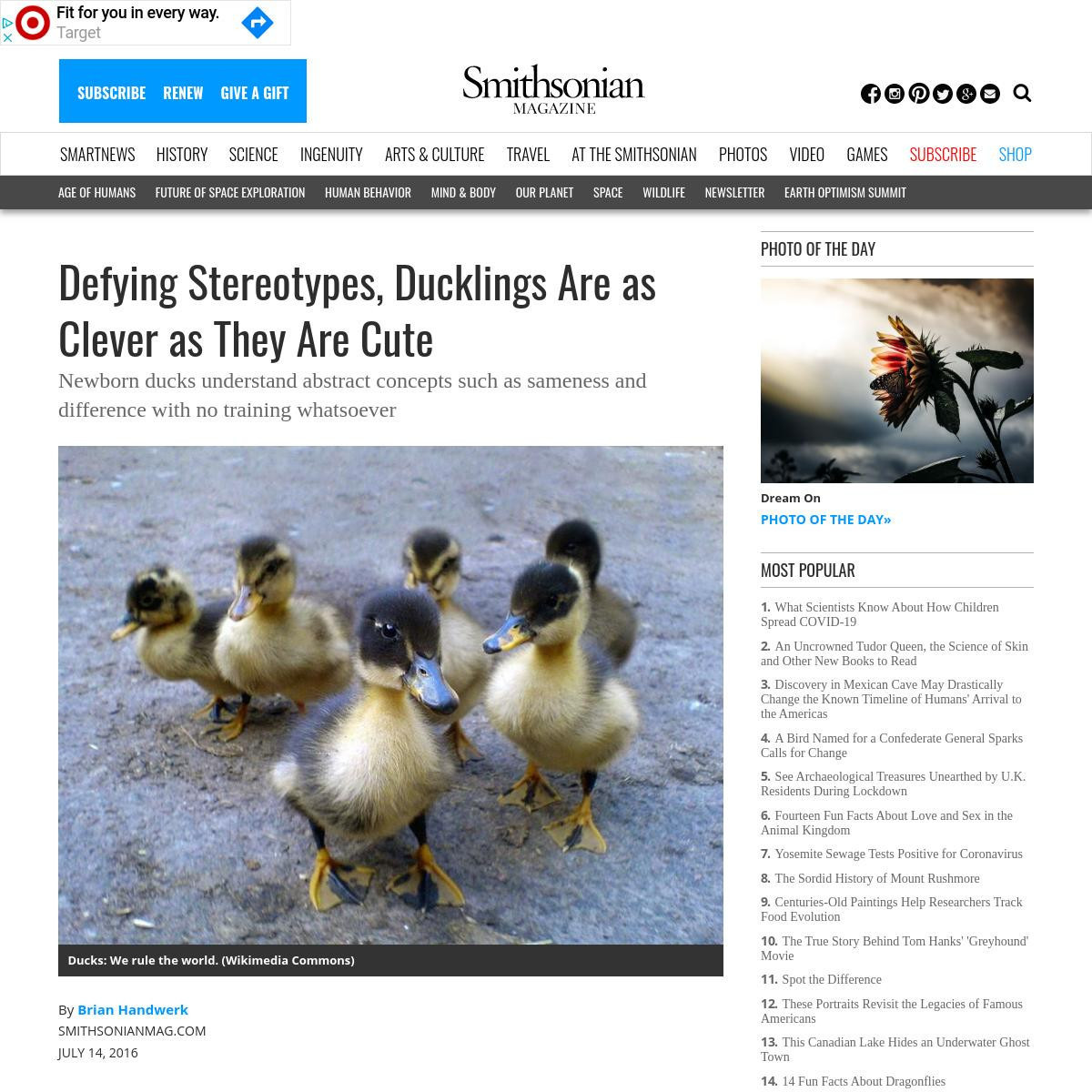 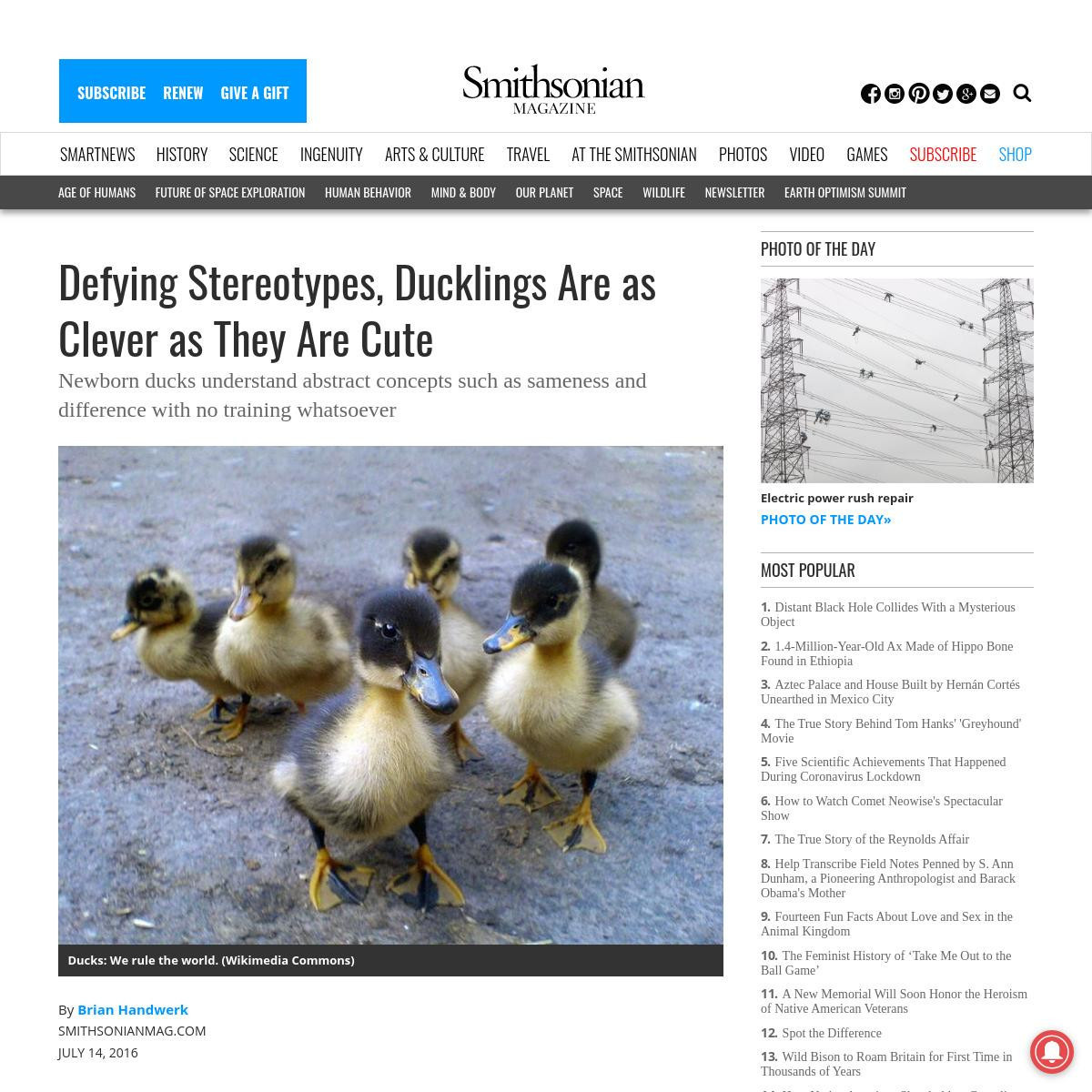