Today your dog makes use of his tail for wagging, pointing and chasing in a circle. But tails do far more than that: 360 million years ago, they helped the first land-walkers make the fateful evolutionary transition from water onto land. In a new study, researchers used stubby-tailed robots designed to move like amphibious “mudskipper” fish to show that the first land walkers may have used their tails to navigate treacherous shoreline conditions.

The findings, detailed in this week’s issue of the journal Science, could aid in the design of amphibious robots that can scamper efficiently across challenging surfaces such as sand that can flow around limbs and impede motion. (No telling what those nimble-footed robots might be used for, but it’s worth noting that the study was funded in part by the U.S. Army Research Office and the Army Research Laboratory.)

“Land is not just hard concrete or rocks. It can be composed of sandy and muddy loose terrain that flows upon contact, and moving across those kinds of materials is not trivial at all,” says study leader Daniel Goldman, a biophysicist at Georgia Tech who specializes in animal locomotion.

To gain more insights into the locomotion of early terrestrial vertebrates, or tetrapods, Goldman and his colleagues studied the movement of the African mudskipper, a small, amphibious fish that lives in tidal areas near shore and spends its time in both water and on sandy and muddy surfaces. Mudskippers use their nubby fins to stroll across land and are known to occasionally jump by thumping their tails.

The team’s observations revealed the mudskipper’s tail is only marginally useful for moving on flat surfaces—but becomes significantly more important when the creature has to propel itself up slippery inclines.

To better understand how the mudskipper was using its fins and tail in concert, the scientists used a 3D-printer to create a robot that mimics some of the creature’s key movements. Most importantly, the “MuddyBot” can do a push-up and thrust its front limbs backward—a movement called “crutching”—and it can place its powerful tail at different angles on the ground relative to its limbs.

“It’s not the most glamorous device,” Goldman says, “but it’s well-controlled. We’re using a robot to do science, and in this case, to talk about things that happened 360 million years ago.”

The robot has two limbs and a powerful tail, with motion provided by electric motors. (Rob Felt, Georgia Tech)

Like the mudskipper, the MuddyBot needed a kick from its tail to ascend a 20-degree sandy incline. The tail was also useful for anchorage, so the robot didn’t slide backwards down the slope.

“By looking at robots, we were able to pick apart some of the benefits of using tails in concert with limbs,” Goldman says. “For steeply inclined materials in particular, if you don’t use your tail, you get stranded pretty quick.”

The findings are an important step—no pun intended—toward understanding the mechanical principles of early tetrapod locomotion and the importance of tails in particular, says John Nyakatura, an evolutionary biologist at the Humboldt University of Berlin who was not involved in the study.

“For a long time, salamander locomotion was regarded as the most adequate model [for early tetrapod movement],” says Nyakatura, who wrote a related news article about the findings for Science. “Since salamanders do not use the tail in this fashion on challenging supports like steep, sandy inclines, nobody thought of the tail.”

Nyakatura also praised the team’s innovative methods. “What I like about this paper is that it draws from different research approaches: robotics, simulations, biomechanics of living fishes,” he says. “The use of simulation and robots in particular offers great possibilities to functional inferences in paleontology. These approaches allow (you) to systematically vary individual parameters. The whole ‘parameter space’ can be explored, including parameter combinations that can’t be observed in living animals.”

John Hutchinson, a professor of evolutionary biomechanics at the University of London, agreed. Moving from water to land “was a major transition in vertebrate evolution, and it set the stage for everything that happened on land in the vertebrate group ever since,” says Hutchinson, who was not involved in the research. “Nobody’s ever used robots to shed light on this area, so it’ll be interesting to see where it goes.” 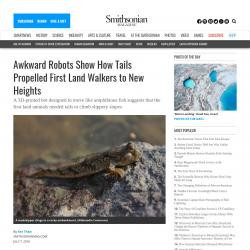