In an electoral season where the presumptive Republican nominee has proposed erecting a wall on the border of the United States and Mexico, not to mention banning those of Muslim faith from immigrating to the United States, it can be easy to forget that Donald Trump is married to an immigrant.

But while those running for the highest political office in the United States must be able to meet just three simple requirements—one of which is being a natural born citizen—there is no such burden imposed on a prospective first spouse.

Melania Trump was born Melanija Knavs in a village in Yugoslavia, now part of modern-day Slovenia, in 1970. A former model, Melania left Slovenia by choice for a bigger European market, living in places like Milan and Paris before a talent agent arranged to get her a visa and an American modeling contract, allowing the 26-year-old to move to New York in 1996.

Melania is not the first candidate's spouse to be from a foreign country; even in recent history, Teresa Heinz Kerry, wife of the 2004 failed candidate and current Secretary of State John Kerry, boasted of her immigrant heritage. Almost 200 years ago, Louisa Catherine Adams became the first and only foreign-born first lady to claim the title when her husband John Quincy Adams took office in 1825.

In a strange historic parallel, Louisa also first came to live in the United States when she was 26, only she did so in 1801. She was a new mother and anxious about her place in the Adams’ family, considering the influence that her mother-in-law, Abigail Adams—who already made it clear that she disproved of Louisa and Quincy’s marriage—wielded. Unlike Melania, who has so far been notably quiet in her husband’s campaign for the nomination, Louisa very much wanted to play a role in John Quincy’s election, and indeed, her weekly tea parties helped swing the election in his favor.

Louisa was born in London, England, in 1775. Her mother was, like her, British-born but her father was born in the colonies, and the family was staunchly supportive of the young republic, staying in France for the duration of the Revolutionary War, which officially began only weeks after Louisa's birth.

While her parents were sympathetic to the fledgling nation’s cause, Louisa was raised the way that “young, pretty, wealthy English girls were raised,” as Louisa Thomas writes in her lushly detailed, authoritative book on the former first lady, Louisa: The Extraordinary Life of Mrs. Adams, which came out this spring.

Her upbringing would initially provoke the ire of the Adams clan, direct descendants of the settlers who founded the Massachusetts Bay Colony, and looked down on those who valued worldly possessions. Indeed, just that Louisa was born in London bothered Abigail, who early on referred to her as a “half-blood.” But her almost aristocratic air—honed by following John Quincy on his diplomatic tours in Europe after their marriage—was key for his presidential campaign. While many in the United States also considered her to be a foreigner, they saw her experience as a diplomat’s wife as a novelty, and Louisa used her accomplishments to her advantage.

“She wasn’t an intellectual but she was very intelligent,” Thomas tells Smithsonian.com. Though Louisa was taken out of school at the age of 14 to prepare for the marriage “circuit”, she showed a natural interest in learning.

Like Abigail and John Adams, Louisa and John Quincy engaged in an extensive correspondence throughout their relationship. At first, Louisa was unsure what to write, and self-conscious about her words, but she grew into her voice. Throughout her life, she wrote memoirs and autobiographies, in addition to her many letters, leaving behind a vibrant portrait of her opinions.

Louisa lived during a time when women were not supposed to express an interest in politics, but the scene fascinated her. “She writes these lengthy letters about political gossip, where she spends three pages gossiping about the treasury, way beyond mainstream news of the day, and then denies her interest,” Thomas says.

After the Adamses had an early social faux pas in Washington, though, Louisa began to understand how women could sway politics. Following John Quincy’s appointment as James Monroe’s Secretary of State, both John Quincy and Louisa ignored a custom that demanded that newcomers in Washington make the first social call to all notable persons in Congress. Louisa then experienced a social freeze-out by the women of Washington, and both Louisa and John Quincy initially suffered for the slight. At the time, Louisa wrote, “Indeed I could hardly have imagined that a man’s interests could be so dependent on his wife’s manners,” as Thomas records.

Louisa went about working her way into the Washington social scene, and through the parties she hosted, she became the capital’s “primary hostess,” as Thomas puts it. Her presence seemingly helped compensate for John Quincy’s belief, passed down from his father, that candidates shouldn't actively campaign or in any way express their ambitions publicly.

“He believed that merit alone, not party or political campaign rhetoric, should determine the choice of the American people,” as Harlow G. Unger wrote in John Quincy Adams: A Life. It was a view that made more sense at the time, considering that until 1824, the year of John Quincy’s presidential campaign, the popular vote wasn't even recorded.

That election showed how the balance of power in Washington had started to shift. When the United States of America was first founded, the Constitution and Bill of Rights dictated that citizens should have the right to vote and that the country would have a free press. Except at the time, that meant almost universally that only white men could vote, and, among them, only those that held land. And though newspapers were free to print uncensored content, they were limited in reach and readership.

Come 1824, however, the United States’ franchise had expanded into Native American territory, creating new states and opening up the opportunity for more to vote. Meanwhile, media production boomed, and by 1823, there were 598 newspapers in the nation, allowing citizens to be better informed and more engaged with the politics of the day.

Though John Quincy Adams, the son of a president with a long history of public service, might have once seemed to be the heir apparent to the executive office, the growing populist movement—fed by a growing frustration with banks and business, which was accelerated by the Panic of 1819—made for close competition in the multi-candidate field for the election.

Adams was up against Andrew Jackson, William H. Crawford and Henry Clay. Though those in Washington did not initially take Jackson seriously as a politician, his charisma and victory at the Battle of New Orleans caused the public to rally for the war hero.

Meanwhile, Adams, who cared little for putting on a show, preferring to focus on the politics at hand, did little to curry favor with the greater population. Considering that Democratic-Republicans distrusted him for his ties to Federalism, and most Southerners refused to vote for him because he morally opposed to slavery, his chances for election were looking increasingly bleak.

Louisa became the face of his election. Starting in 1819, she held her “tea parties” every Tuesday night, in addition to hosting balls and other social events. The women in Washington who had once refused to visit her because off her early misstep now became regulars at her raved-about parties. When her brother’s chronic health problems (and her own) forced her to withdraw to Philadelphia, she set up a salon in her hotel parlor there, where important figures in the area would visit to exchange news and discuss the election.

In her letters to John Quincy, she continued to urge him to engage with the public more; she saw the path to victory relied in having Jackson-like charisma, and tried to push her husband toward presenting himself in such a way. “She probably wouldn’t admit it, but she was electioneering,” Thomas notes.

Louisa held her last tea party on the evening of Tuesday, February 8, 1825, the night before the House voted. As Thomas writes, based off of John Quincy’s diary, 67 members of the House came to her party, as well as “400 citizens and strangers.”

The next day, the House—led by Clay, the failed candidate and Speaker of the House—voted John Quincy Adams as the next president.

Much has been made over the “corrupt bargain” that Jackson accused Adams and Clay of, for when Adams became president, he made Clay the new Secretary of State. But Louisa’s role has been obscured by history. Without Louisa’s support and social influence, who knows how many electoral votes her husband would have initially curried, causing Clay to rally the vote around him.

The senior Adams famously relied on Abigail’s perspective on issues of the day, but Louisa arguably was more integral to her husband’s election, as she helmed the unofficial campaign. As Thomas puts it in Louisa, “She was not content to be an adviser. She sought a public presence that Abigail avoided, and she chafed when she ran up against its limits."

But whereas his father trusted his wife almost implicitly and Abigail often referred to their property as “ours,” Louisa and John Quincy did not share the same respect. Louisa always felt beholden to John Quincy for lifting her out of the poverty her family had come into before she married him. While she tried to reconcile her own desire for equality with her institutionalized sense of a woman’s place, she struggled.

“She was of two minds about what a women’s role was,” Thomas says. “On one hand, she’s retiring demure, innocent and on the other hand, she’s self taught and has this vibrant intellectual life.”

Louisa grew up in a world where she was groomed to marry and told that women were supposed to stay in their realm. Even with her tea parties, she would not and could not admit what she was actually doing.

Louisa’s time in the White House would be marked by misery. Jackson’s victorious campaign for president in 1828 would begin barely after John Quincy stepped into the White House. The “corrupt bargain” lost him public support, and he had no reliable allies in Congress. Meanwhile, Louisa felt abandoned and neglected in the White House.

The years following for Louisa were colored by personal tragedy, including her son’s suicide in 1829. While her husband found a second political career as a member of the House of Representatives, and led a crusade for the right to petition against slavery, she did not play a role, rather though she considered slavery a moral sin, she had to contend with her own deep-seated racism.

When she turned 65, Louisa began what Thomas calls her “most ambitious project,” a 70-page memoir titled, The Adventures of a Nobody, which chronicled her history since she first wed John Quincy, preserving her life and efforts for historians to come.

Today, in a time where everything seems to be written down, little is known about the newest foreign-born contender for the First Lady of the United States. As the election heats up though, history will record the role that Melania chooses to play in her husband’s campaign, and what, if any, historic parallels she shares with the woman in her position 200 years earlier. 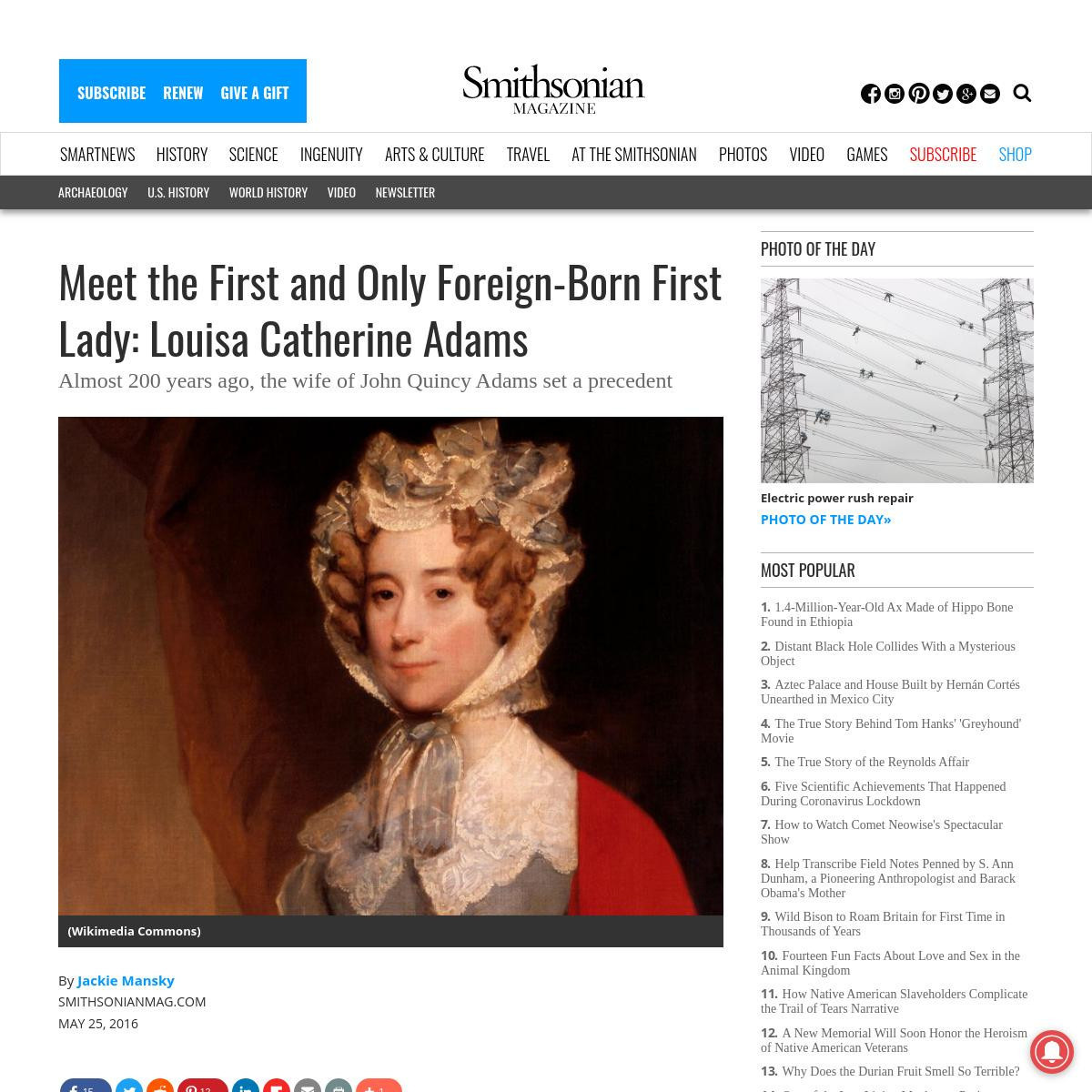 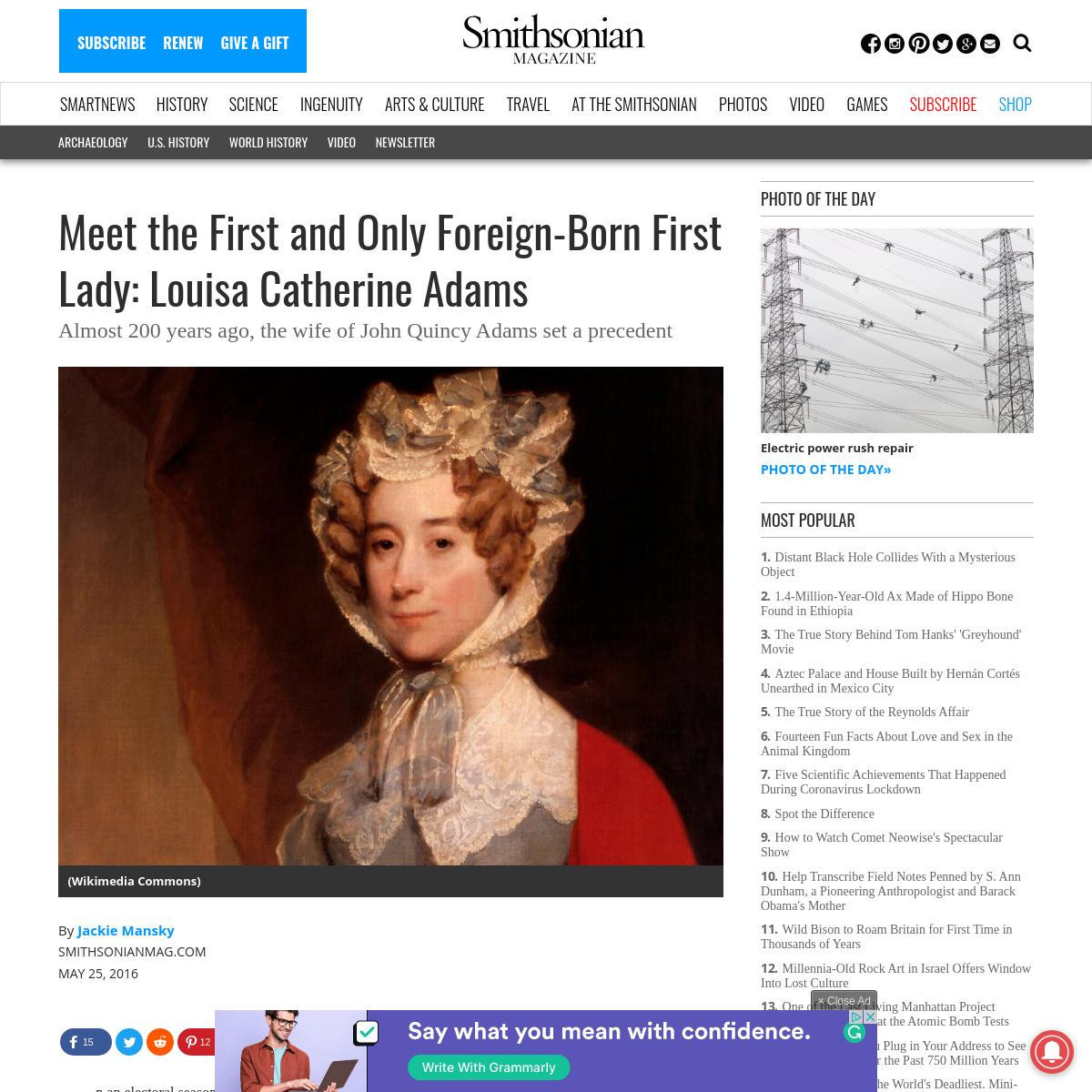