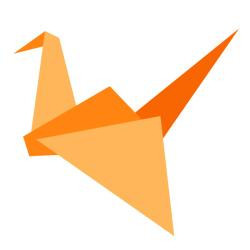 I teach fifth grade science and social studies at Osborne Elementary School at Quaker Valley School District in Pittsburgh, Pennsylvania. I hold a BA in Psychology and an MAT in Elementary Education from the University of Pittsburgh. 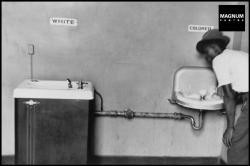 The Road to Civil Rights

<p>Essential questions:</p> <ul><li>How can we learn more about history through a photograph?</li><li>How do social factors, such as racism, influence change?</li><li>How much power do American citizens have to change government policies?</li></ul><ul><li>What factors drove the Jim Crow era and segregation after the Civil War?</li><li>How did Americans push back against discrimination, specifically segregation, and fight for civil rights?</li></ul><p>This series of lessons is designed as a broad introduction to the factors leading up to the Civil Rights Movement.  Students will look closely at the 13th, 4th, and 15th amendments to the Constitution. Students will then explore some of the factors leading to and consequences of the rise of segregated America during the Jim Crow era in the years following the Civil War. They will look closely at powerful images that exemplify some of the Jim Crow laws, and then explore some of the court cases and responses of citizens that helped to bring about some changes leading up to and during the Civil Rights Movement in the United States. </p> <p>Time: 3-4 class periods with optional maker project assessment.</p> <p>Day 1</p> <p>Anticipatory set: Have students complete a chalk talk to unravel their definitions of equality vs. racism. Discuss and formally define equality and racism. </p> <p>Looking closely: Share the image of the water fountains and notice similarities and differences (Optional opportunity to use the See - Think - Wonder thinking routine). Discuss context of Jim Crow era and explain we will be exploring what factors led to these laws and how people fought to change them. </p> <p>Have students look closely at the 13th, 14th, and 15th amendments and dissect the language of the amendments to understand their meaning using the Parts, Purposes, Messages thinking routine. Read page one of iCivics Jim Crow handout. Students should record examples of equality and racism on post it notes as they read. When finished, they can add these post it notes to the chalk talk posters with definitions of equality and racism as they discuss their examples. </p> <p>Day 2</p> <p>Anticipatory set: Use the Imagine if... thinking routine to have groups of students explore challenging Jim Crow era issues.</p> <p>Looking closely: Read "Jim Crow and the Great Migration" and have students continue to record examples of equality vs. racism on post it notes to add to the chalk talk posters from yesterday. Explore powerful Jim Crow images with a chalk talk using the Reporter's Notebook thinking routine.<br /></p> <p>Discuss how some people began to speak out against the injustices of the Jim Crow laws, both directly and indirectly. Compare and contrast the approaches of Booker T. Washington and  W. E. B. Du Bois. Then read "I, too" by Langston Hughes. Students should complete the See/Hear - Think - Wonder during their first listen. Then students can deconstruct the poem in groups, paying attention to both the literal and figurative meaning of the metaphor of the kitchen in the poem. </p> <p>Exit ticket/Reflection: What are the multiple meanings of the kitchen in the poem, "I, too," by Langston Hughes? What was his purpose for writing this poem?</p> <p>Day 3</p> <p>Anticipatory set: Use the Making it Fair: Now, Then, Later thinking routine to start to identify how people could have made these Jim Crow restrictions more fair. </p> <p>Looking closely: Read "The Road to Civil Rights" handout from iCivics. Students can add equality vs. racism post its to their original chalk talks. Watch the video of the sit-in reenactment (optional - reenact a sit-in in the classroom). Look closely at images of marches, sit-ins, boycotts, and court cases and use the Reporter's Notebook thinking routine to notice the layers of interactions during the events. </p> <p>Optional assessment: Introduce the Journey to Civil Rights maker project. Allow students 3-4 days to work on their artifacts and essay explaining their choices.</p> <p>#PZPGH</p> 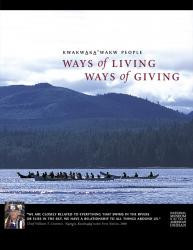 <p>Essential questions:</p> <p>1. How are Native American groups defined by cultural practices?</p> <p>2. How does the environment impact the culture of the people living in a region?</p> <p>In this collection, students will analyze, compare, and contrast the similarities and differences of the cultures of Native American groups living in the northwest and northeast regions with a focus on food, crops, and natural resources, understanding how the environment influenced the cultures and traditions of Native American people.</p> <p>American Indian Essential Understandings (Written by the National Museum of the American Indian Native Knowledge 360 <a href="https://americanindian.si.edu/nk360/understandings.cshtml#eublock3">https://americanindian.si.edu/...</a>):</p> <p>1. <strong>Culture is a result of human socialization. People acquire knowledge and values by interacting with other people through common language, place, and community. In the Americas, there is vast cultural diversity among more than 2,000 tribal groups. Tribes have unique cultures and ways of life that span history from time immemorial to the present day.</strong><br /></p> <p>Key Concepts:</p> <ul><li>There is no single American Indian culture or language.</li><li>American Indians are both individuals and members of a tribal group.</li><li>American Indians share many similarities with other indigenous people of the world, along with many differences.</li></ul><p>2. <strong>For thousands of years, indigenous people have studied, managed, honored, and thrived in their homelands. These foundations continue to influence American Indian relationships and interactions with the land today.</strong></p> <p>Key Concept:</p> <ul><li>The story of American Indians in the Western Hemisphere is intricately intertwined with places and environments. Native knowledge systems resulted from long-term occupation of tribal homelands, and observation and interaction with places. American Indians understood and valued the relationship between local environments and cultural traditions, and recognized that human beings are part of the environment.</li></ul><p>Time: 3 class periods</p> <p></p> <p>Day 1: </p> <p>Anticipatory set: Begin by viewing the “Food and Cultures Video” from the Pacific Northwest History and Cultures online lesson. Students should use the “Add 1” thinking routine after viewing to note the important take aways. After discussing, students can make a connection to their own cultural practices by writing about the foods they eat in their cultures.</p> <p>Looking closely: Students can then read the essay written by Shana Brown to extend their understanding about the connections between foods and culture. Students should annotate the article using post-it notes to record connections, challenges, concepts, and changes to their thinking. They can then place them on a class 4 C’s poster to share out their learning during discussion. Students should explore the three case studies, using the annotation tools while they read to look closely at objects, images, and quotes. They can use the student handout to complete a case study analysis and support a claim that “Salmon is important to Native Peoples and Nations of the Pacific Northwest” with evidence from their exploration. Students can then read “People of the Potlatch” and represent the cultural practice of the potlatch with the “Colour, Symbol, Image” thinking routine. </p> <p> Day 2:</p> <p>Anticipatory set: Assign students sections of the Haudenosaunee Thanksgiving Address to read aloud. When students have read the address, have them complete the “Step Inside” thinking routine about giving thanks from the perspective of a Haudenosaunee American Indian person. </p> <p> Looking closely: Students can read excerpts from the “HAUDENOSAUNEE GUIDE FOR EDUCATORS” with a focus on “Who are the Haudenosaunee” and “The Relationship to the Natural World,” and/or the “Celebration of Native American Food” article and create headlines for the most important information for each or all selections. When finished with the readings, students should complete the claims and evidence organizer to identify which foods were important to the Haudenosaunee people based on evidence from the text.</p> <p> Day 3:</p> <p>Anticipatory set: Students should work together complete a Venn Diagram sort to compare and contrast Northwest and Northeast cultural practices/foods as review. </p> <p> Looking closely: Students will construct a compare and contrast writing explaining how the environment influenced the culture of American Indian people of the Northwest and Northeast regions using evidence they have gathered to support their thinking.</p> <p>#PZPGH</p> <p>American Indian Nations: Kwakwaka’wakw, Haudenosaunee, Cayuga, Mohawk, Oneida, Onondaga, Seneca, Tuscarora </p> <p> </p> 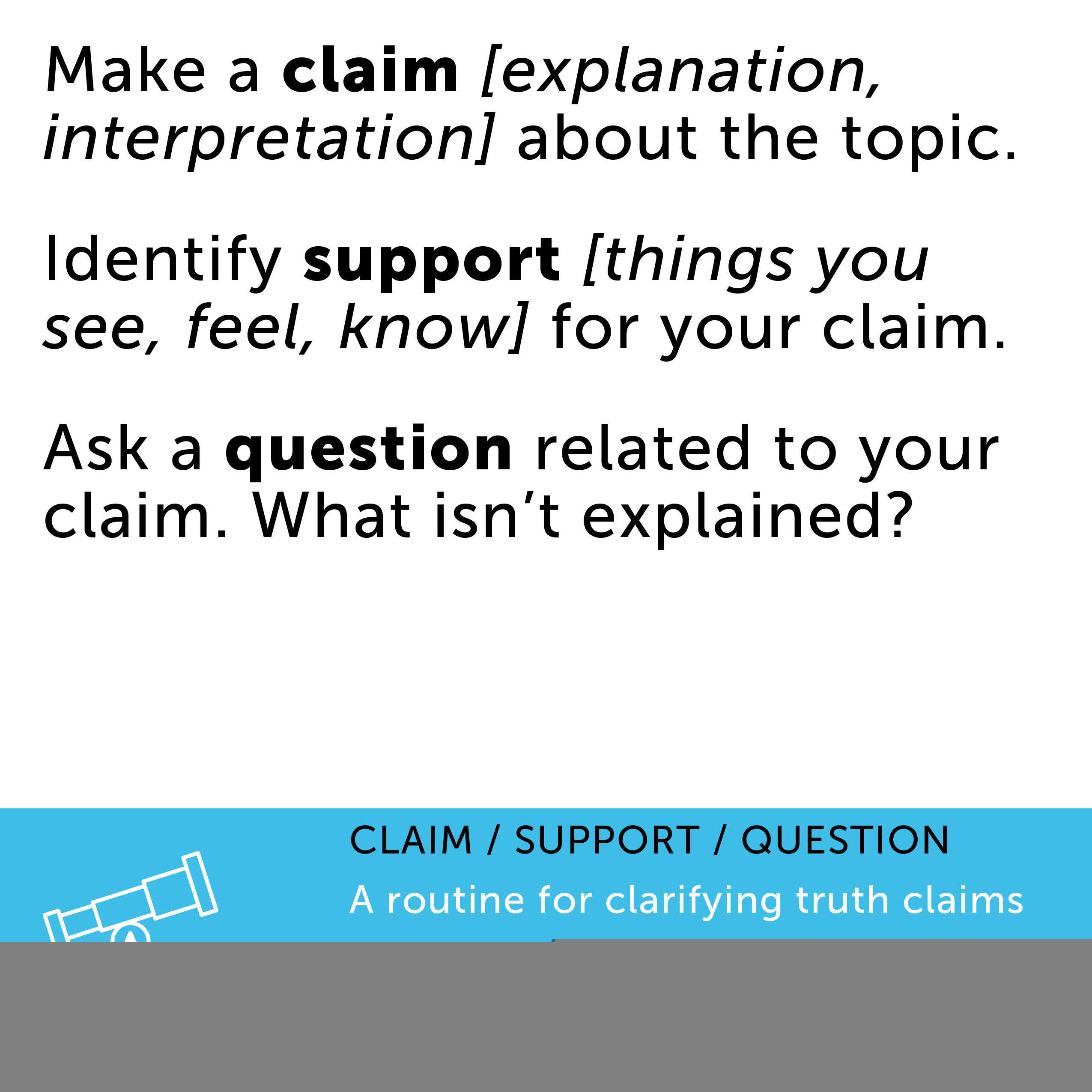 Imagery and Causes of the American Revolution

<p>Essential Questions:</p> <p></p> <ol><li>How can we learn about history through a political cartoon or artifact?</li><li>What were the causes and events leading up to the American Revolution?</li></ol><p>This lesson is designed as an introduction to the causes of the American Revolution. Students will use primary sources (political cartoons, historical artwork, etc.) to identify some key historical events and the feelings of both the colonists and the British during and as a result of these events. </p> <p>Anticipatory set:</p> <p>Choose either the Claim, Support, Question or the See, Think, Wonder thinking routine to begin the discussion of the "Join or Die" political cartoon. Once students have taken the time to look closely at the image, discuss the symbolism, the creator, and the implications of the French and Indian War on the American Revolution. </p> <p>Looking Closely:</p> <p>Explain that students will break into groups to look closely at an image that has to do with an event leading up to the beginning of the American Revolution. Students can either continue to use the thinking routine you modeled in the anticipatory set, or they can use the Reporter's Notebook routine. Give students ample time to look closely at the image and notice the details, looking specifically for clues in titles and symbolism. Alternatively, the students could use the Cartoon Analysis Worksheet developed by the National Archives to notice and name some of the details in the images. If students are using the Reporter's Notebook thinking routine, have them complete only the facts and feelings section at this point. </p> <p>Once students have had time to explore their image, create a timeline of events with the images as a class, reading about and discussing each one. Once students have additional information about the event, the should complete the report at the bottom of the Reporter's Notebook organizer using additional details from the text. </p> <p>Closing/Assessment:</p> <p>Students will complete a gallery walk of the images with the reports written by the students. After reading the reports and looking again at each image, students will create a headline for the report, capturing the most important aspect of the event.</p> <p></p> <p></p>